I received a little blurb about this in an email this morning so I checked out the Penguin Random House Give-a-Book website and thought this was an awesome promotion to get books into the hands of children all over.  You can read all about the program HERE but in a nutshell it amounts to using #GiveaBook on Twitter or Facebook.  Penguin Random House in partnership with First Book and First Book Canada will donate one book each time #GiveaBook is used up to a maximum of 35,000 books.

According to their website "the #GiveaBook applies to any type of book giving, whether as a gift to friend or family member or a donation to a charity book drive such as Angel Trees, library donation boxes and individual bookstore collection drives."

We are a book community and many of us avail ourselves of ARC's, Netgalley books, books directly from authors and Amazon or Kobo freebies.  I know, for myself, that saves me a ton of $$ every year.  If everyone (who was comfortable with it and able) gifted one book to a friend, family member or charity drive and tweeted/Facebooked it using #GiveaBook think of the number books that would be donated!

I know I gift books to people at Christmas time and I know almost every mall has a drop box for unwrapped gifts to be distributed by various charities to underprivileged children.  I have purchased a children's book or two as well as a small toy and donated.  I have every intention of doing it again this year, so this program does not ask me to spend any money I wouldn't ordinarily spend anyway.

Just a simple tweet using #GiveaBook and a book gets placed in another child's hand.  Seems like a good deal to me!

If you are comfortable with the idea ... participate! 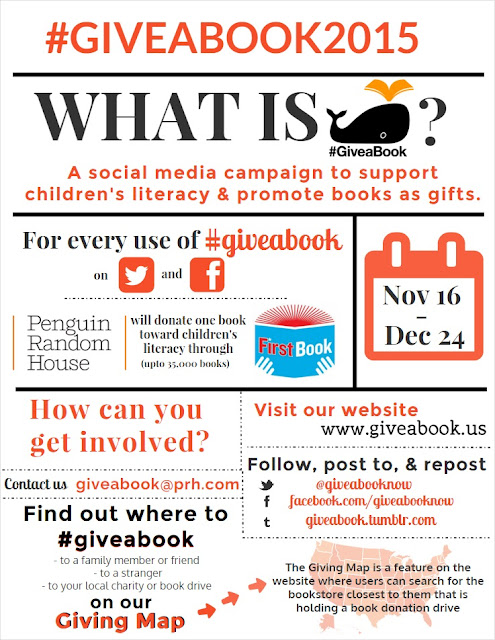 
Twitter Action Requirements: Only original tweets and quote tweets (those tweets that embed an existing tweet and include new original material) using the hashtag, #Giveabook, will trigger a donation from Penguin Random House.Limit one tweet per account per day. Any other action, including but not limited to verbatim retweets and likes will not trigger a donation from Penguin Random House.


Penguin Random House is the sole sponsor of the #Giveabook campaign, which is no way sponsored, endorsed, administered by, or associated with Facebook or Twitter.