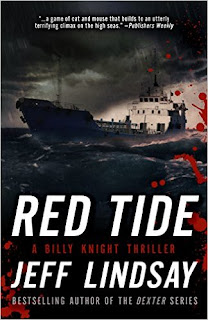 Jeff Lindsay once again brings his readers to Miami, this time not with Dexter rather with Billy Knight, but no worries – the body count is still high.  Billy is an ex-cop who wants nothing more than to be on his boat chartering tourists out fishing.  When he’s not doing that he is trying to keep things together with his girlfriend (she leaves) or he hangs out in bars (ends up in jail).  Life’s not so great.  On a trip picking up and delivering a boat for a friend he and his friend Nicky are enjoying the ocean when Nicky decides to do some target practice shooting coconuts out of the water.  One of the coconuts turns out to be a human head.  It looks like another Haitian refugee has not made it safely to American soil.  “Happens all the time,” say the police and Billy tends to agree with them.  But Nicky feels a responsibility to this corpse he took a pot shot at.

Enter Anna, a refugee herself, albeit from Eastern Europe.  Billy immediately falls for her and wouldn’t you know it – because of her own history – she agrees with Nicky; someone has to look into what turns out to be a series of “tragic drownings” involving Haitian refugees.  Reluctantly, Billy agrees to look into it.  With the help of The Deacon, Billy’s contact on the police force the three take the reader along on an adventure on the high seas hunting down a Haitian Voodoo Bocor who’s best talent seems to be making Haitians disappear from his boat – after taking their money.

This is the second book in the Billy Knight series and it read fine as a stand-alone novel.  I didn’t feel I missed anything by not having read the first book.  Admittedly there were a few intriguing snippets here and there, but were they compelling enough to entice me to pick up the first installment?  Not sure.

I liked the setting in this book, I liked the characters – especially Nicky because he is quite unique, the action was intense because it took place in the closed confines of a ship sailing from Haiti to Miami and there were a few voodoo tidbits thrown in here and there.  Yet overall the story was lacking originality.  It felt almost a little formulaic if one compared it to the Dexter books … changed a couple of names and circumstances yet I could have taken the two books pulled character names from one, easily placed an equals sign to a character from the other.  I can’t rave about the book but would still mention it to action/thriller fans without feeling too guilty.

ABOUT THE AUTHOR (from GR Author Bio) 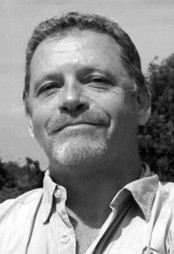 Lindsay is best known for writing the Dexter series of novels. Many of his earlier published works include his wife as a co-author. Time Blender was written with Michael Dorn. He graduated from Middlebury College, Vermont, in 1975.

The first book in the series, Darkly Dreaming Dexter, was included on the original nomination list for the Mystery Writers of America's Edgar Awards in the Best First Novel category. However, it was dropped from the list after the group learned that Lindsay had put out several books in the 1990s under another pen name, Jeffrey P. Lindsay.