If you are an “Otherworld” fan and still suffering from withdrawal symptoms because the series ended this is definitely the book to pick up.  It is comprised of six short stories (I would dare to say novellas) and each was a nice (re)visit with the main characters from the book series.  As I was writing the short synopsis of each story I also got to thinking that these stories stand pretty well on their own too ... if you have not read any books in the "Otherworld" series they still make sense and it may whet your appetite for the series.

LIFE AFTER THEFT (Hope and Karl)
With baby number two on the way Karl has retired from his life as a werewolf jewel thief, but one of his clients has one more heist that only Karl can pull off – the theft of the ultimate grimoire containing ancient dark magic spells.

MORGAN (Elena and Clay)
Morgan Walsh has been living with wolves in Alaska – living with them as a wolf – but now he has decided to come to Stonehaven to consider Elena’s invitation to join the pack.  (Elena being the only female werewolf thanks to Clay's impulsive bite and now Alpha in training for the pack)  While on route he stops in Westwood for a bite to eat.  How he resist stopping in a town that advertises itself as “Home of the Werewolves” and the diner gives a 10% discount to all Werewolves and their families … of course the town is talking about their football team ... but Morgan stops anyway.  It’s not too long before he discovers himself in the local jail with barely any recollection of how he got there.  A map with Stonehaven circled and Elena’s telephone number written on it is the only identification he has, so the sheriff calls.  It’s not too long before Elena and Clay realize that things are not quite right in Westwood.

ANGELIC (Eve and Kristof)
With her latest case resolved Eve is ready to join the ghost realm with Kristof for some much needed R&R.  The fates however have a slightly different idea.  They want her to wrap a quick case involving a demon uprising.  To save time she enlists the help of a couple of other avenging angels only to find that she is not the only rule breaker in the “angel corps”.

THE UNGRATEFUL DEAD (Jaime)
While performing one of her on stage séances Jaime is visited by a ghost with a mission and no amount of vervain is going to repel this determined spirit.  Not wanting him hanging around as she is getting ready for a weekend visit from Jeremy she decides to see what his request is all about.  Well, she can certainly put her necromancer skills to good use when she uncovers his little secret.

ZEN AND ART OF VAMPIRISM (Zoe)
Zoe has always been the only vampire in Toronto and she likes it that way, but when two new vamps come to town with the idea of taking over Zoe gives them a tour of the city they will not soon forget.

COUNTERFEIT MAGIC (Lucas & Paige, Adam & Savannah)
Carlos is still trying to get Lucas to leave the Cabal and a new client shows up to hire Winterbourne Investigations to look into the death of her brother … somehow these two incidents are related.  Not until things in Paige and Lucas’ marriage take a turn for the worse and Adam is possessed by a demon do they get the bottom of what is really happening.

Each story was wonderful, but because they featured my favorite characters from the series I must admit to enjoying “Counterfeit Magic” and “Morgan” the best. 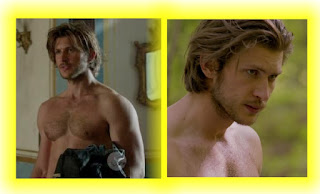 As I was reading this book I realized that I have been quite “brainwashed” by the “Bitten” television series, because every time Clay’s name came up all I could picture in my mind was Greyston Holt.  Not a great hardship, darlin!

("Clay" walking up the stairs after changing out of wolf form ... sorry - not really - but couldn't resist)
THE END 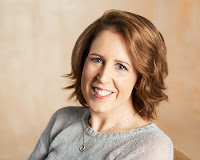 I'm married with three kids and live in rural Ontario, Canada. After graduating with a degree in psychology, I switched gears and studied computer programming. Currently, I'm a full-time writer and parent. Could I make this section any more dull? Probably not.