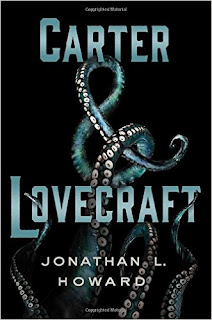 Daniel Carter is a homicide detective wrapping up the “Child Catcher” serial killer case.  The perp is sitting, gut-shot, in the corner bleeding out but with a big smile on his face while Charlie Hammond; Carter’s partner, puts his service revolver to his own head and pulls the trigger.

Nothing could possibly explain what happened in that room and Daniel resigns from the police force to hang out his shingle as a private investigator.  He is quite content for a while handling divorce surveillance until a mysterious gentlemen walks into his office one day and announces, much to Daniel’s surprise, that he has inherited property in Providence, R.I.  The benefactor is totally unknown to Daniel and even more unusual, when he arrives in Providence he discovers his strange inheritance is a functioning bookshop run by Emily Lovecraft – yes, she is descended from the famous H.P. Lovecraft.  Better yet, Daniel is descended from another Carter, HPL’s best friend.  Aha, that’s where the bookshop came from?  As Daniel is coming to terms with all this, people start dying under very mysterious circumstances and Daniel is unwillingly drawn into the very “unusual” murders.

I read a blurb about this book and immediately went to my library site and requested it.  I am glad I did that rather than run to my nearest bookseller to purchase it because it turned out to be quite a disappointment.  Credit where credit is due – the first part of the book kept me very interested then it started to go very strange very quickly, and not necessarily in a good way for this reader.  A math professor with a strange artifact, a stretch of land known as Waite’s Bill, the unusual Waite’s themselves, an alternate reality, quasi-Cthulhu being and something called “The Twist”.  My head was spinning.  When I finally got to the end I turned the last page and thought “huh!”  The concept of the story was good but I got bogged down in the author’s descriptions (which really weren’t), explanations (which really didn’t) and ending (which really wasn’t).

I don’t know if I was not in the mood for this book, if I’m just too dim about the pseudo-math/science/mythology to “get it" or if the last third of the book really was the hot mess I think it was?

Some things I found particularly annoying about this book?

… while I liked the cover art it was deceptive.

… a very lengthy passage involving Daniel explaining to himself (and the readers) why it was okay for Emily, who happens to be African American, to be dating upper crust (AND white) Kenneth Rothwell.  It’s the 21st century – not necessary!

… even the “unusual” murders had a familiar ring to them and I know the “manner of death”, while shocking and suspenseful, has been done before, and even the author draws the parallel to the original.

… Mr. Howard’s attempts at writing accents left me annoyed after a while and every once in a while a “British-ism” would slip in and totally throw me off.

Some things I enjoyed?

… the verbal play between Daniel and Emily was fun to read and well done.

… The ending was a surprise

The ending itself, while interesting and unexpected, was wide open so there could well be a sequel in the works.  Masochist that I am, if the sequel gets written I would probably pick it up (from the library!) because there was still the potential of a really good horror/time warp story buried in this book and I would like to see where that goes. 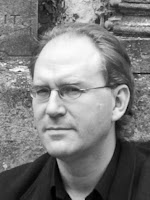 Jonathan L. Howard is a game designer, scriptwriter, and veteran of the computer-games industry since the early nineties, with title such as the Broken Sword series to his credit.  He is the author of the Johannes Cabal series, as well as the young adult novels Katya’s World and Katya’s War.  He lives in the United Kingdom with his wife and daughter.