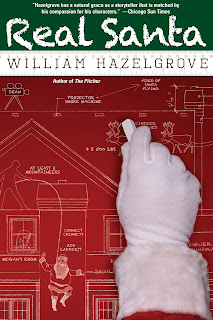 Just how far would you go to keep your daughter’s belief in Santa Claus alive for just a little while longer?  Would you … be willing to become the town laughing stock?  Put your family’s finances in jeopardy?  Take a chance on alienating the rest of your family?  Risk your life?  George Kronenfeldt does all those things, and more.

When George’s 9-year-old daughter Megan comes home from school and announces that her fourth grade teacher has denounced Santa Claus during a discussion on Global Warming George decides to take matters into his own hands.  Marching off to school to confront the teacher turns into a shoving match and George vows to keep Megan’s belief in Santa alive for at least one more year.  He is determined that having ruined his relationship with his children from his first marriage this time he will be a better parent.  He will use his expertise as an engineer and manufacture a Christmas Eve visit from Santa that Megan will never forget.  One that she can videotape and show her friends … and Santa will stay alive in their lives for one more year … even if he has to be the “real Santa”.

All the nay-sayers will cannot deter him from his mission as he hires a filmmaker to help with special effects, rents nine flatulent reindeer and a sleigh to perch on his roof, a contractor to expand his chimney and a couple of mountain climbers to help him up and down that same chimney.  Soon enough he begins to have his own doubts about his scheme, but he has reached the point of no return and plods forth.  Does Megan get her video of Santa’s visit?  In the end … no, I won’t give it away!  Suffice it to say that I do not think it was by accident that George Kronenfeldt shares his name with that other iconic George of “It’s a Wonderful Life” fame.

This book was a wonderful Christmas read.  George is a loveable loser just trying to do his best when everyone in his life doubts him.  This book has everything you could want in a Christmas read; a little history about Santa Claus, a lot of humor, many touching moments, some suspense and great characters.  Megan’s teacher is the perfect villianess in this book – over the top, set in her ways, crotchety, bitter and determined to stop George at all costs.  Throw in the next-door neighbor with the ugly seasonal inflatables (a tank?) on his lawn, the long suffering wife who decides she’s finally had enough, the vengeful ex-wife and his two slightly neglected children from his first marriage and you have almost the entire cast for this perfect Christmas farce.

I’m going to rate this Christmas read at 4 Christmas trees.  There were a few sections that seemed to go on just a little bit too long and I could have done with less of the film director but don’t let that stop you from picking this book up if you are looking for a Christmas read.  Yes – you will have to suspend reality, take a few things on faith and give in to the spirit of Christmas, but that won’t be so hard to do as you cheer for George right to the end.


I could so see this book being made into a movie ... I'd watch it.

* I received a copy of this ebook at no charge from the publisher, Koehler Books via Netgalley in exchange for an honest review *

His books have received starred reviews in Publisher Weekly and Booklist, Book of the Month Selections, ALA Editors Choice Awards Junior Library Guild Selections and optioned for the movies. He was the Ernest Hemingway Writer in Residence where he wrote in the attic of Ernest Hemingway’s birthplace. He has written articles and reviews for USA Today and other publications and has been featured on NPR All Things Considered. The New York Times, LA Times, Chicago Tribune, USA Today have all covered his books with features.

He runs a cultural blog, The View From Hemingway’s Attic. He lives in Chicago.