Hear My Sad Story - A Review 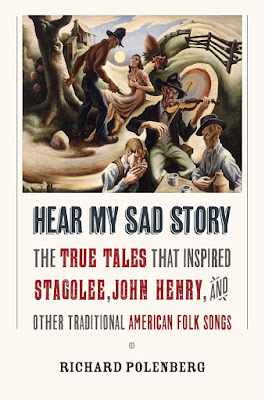 This isn’t just a book about music; it’s a book about history, slavery, racial conflict, murder and love, all presented in the lyrics of songs.  Pretty much any part of living life has at one point or another been turned into a ballad or song of some type.  Music has been the teller of news and history since before books and newspapers; it’s a long standing tradition.

As with the type of books people read or movies they enjoy music is a personal thing.  Not everyone enjoys the same kind.  When people ask me what kind of music I like my response is “pretty much anything as long as I can understand the lyrics”.  Like a good book I enjoy songs that tell a story.

When I was growing up there was no such thing as shouting “shotgun” to get the front seat and having control over the radio (or the comfy chair and the television).  Whatever my dad was listening to on the radio – that’s what everyone listened to – so I grew up listening to Stompin’ Tom Connors sing “Bud the Spud”, Gordon Lightfoot singing about “The Wreck of the Edmund Fitzgerald” and Red Sovine with his tearjerker “The Teddy Bear Song”.  I guess some of it took because I still like listening to ballads.

When I saw the tag line for this book “The true tales that inspired “Stagolee”, John Henry” and other traditional American folk songs” it pique my interest.  To read the story behind the story sounded interesting.  Although there were only a few songs I could claim familiarity with (Tom Dooley, Casey Jones) it did not diminish my enjoyment about hearing the “back story” of the others.  Sometimes it was murder, sometimes it was news, a lost love or life’s hardships and sometimes the subject was just an interesting person the balladeer knew.  Inspiration can strike from the strangest places.

Mr. Polenberg has obviously done his research to give his readers a well-written book about the history of folk songs.  I would recommend this book to anyone that enjoys folk music and the story behind the iconic songs.  It would be a nice addition to any music library.

ABOUT THE AUTHOR (from Cornell Press)

Richard Polenberg is Marie Underhill Noll Professor of History Emeritus at Cornell University. He is the author of Hear My Sad Story: The True Tales That Inspired "Stagolee," "John Henry," and Other Traditional American Folk Songsand Fighting Faiths: The Abrams Case, The Supreme Court, and Free Speech, and is the editor of In the Matter of J. Robert Oppenheimer: The Security Clearance Hearing, all from Cornell.