The Witch of Lime Street - A Review

THE WITCH OF LIME STREET by David Jaher 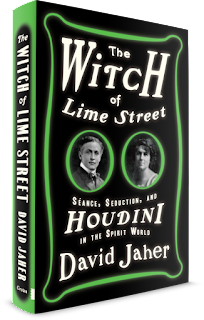 Harry Houdini, arguably the world’s best magician, performed feats that made people believe he could dissolve his body – get out of perilous situations – and then put his body back together again.  He also performed feats of “mentalism” causing people to believe he could converse with the dead.  In actual fact he could do neither.  He knew what he accomplished was done through misdirection and trickery, but the public in the 1920’s wanted mystics, spiritualists and mediums.

Arthur Conan Doyle, the creator of one of the most logical minds in literary fiction, was one of those people who desperately wanted to believe that people could commune with the dead so he could once again speak with his dead son.

Each had their own view on the subject and each had their following of fans and believers.  As much as Houdini wanted to believe so he could have a final conversation with his deceased mother, he knew it was bunk and was determined to stop people from having their emotions and grief toyed with and their wallets lightened in the process.  Houdini was fighting an uphill battle.  The 1920’s were an age when spiritualism became not only a psuedo-religion but was also considered a science.  The likes of Harvard University set up a “parapsychology” department.  “Scientific American”, a well-respected scientific publication offered a reward for anyone proving they were the real deal in mediumship.

Enter “Margery”, the so called “Witch of Lime Street”, claiming she could not only communicate with the other side but could bring back the spirit of her dead brother, Howard.  Through ceaseless séances and spiritualist sittings Howard continued to materialize and perform the “tricks” the researchers had contrived to prove he was real.
Most of those who sat in on the séances Margery held were believers … Houdini went to his grave unconvinced … but what a battle it was. 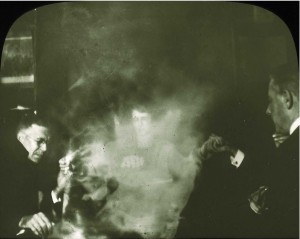 Mr. Jaher tackled a complicated and interesting subject in this book.  It was very well researched and provided an in-depth look into the spiritualism craze that was sweeping the world during the early 20th century.  In my opinion he made no attempt to sway the reader into believing or not and in fact at the end of the book he recounts Margery’s final séances and offers no definitive conclusions so the reader can make his/her own decision.

As well researched as the book was, or possibly because of that very fact, the book seemed to be lengthy and very repetitive.  Margery’s “performances” and the research around them went on for years, often several times a week and Mr. Jaher recounted as many of them as he could.  I very much enjoyed the first and the last 25% percent of this book; the 50% in the middle could have been trimmed significantly had Mr. Jaher only included those séances in which something new happened.  That being said I did enjoy the book and I learned a few things I had not known before … a few of which I could have lived happily without knowing, such as ways and means of hiding “ectoplasm” to make it appear when needed.  Those mediums, if nothing else, were certainly creative!

I received an ARC of this book and read it as an ebook.  I want to check out a physical copy of the book to see if there are pictures of all the well-known names that were dropped throughout this book as well as possibly some of the various testing devices they used such as the “bell box”.  (There are a few photographs on Mr. Jaher’s website)  The book certainly made me curious so, despite the repetition I mentioned, I am still awarding it 4 stars. 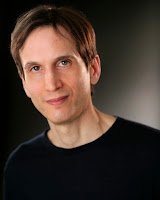 David Jaher received a BA from Brandeis University and an MFA in Film Production from New York University. At NYU, he was the recipient of the WTC Johnson Fellowship for directing. Jaher has been a screenwriter and a professional astrologer.

A New York native and resident, this is his first book.