Devoted in Death - A Review

DEVOTED IN DEATH by J.D. Robb 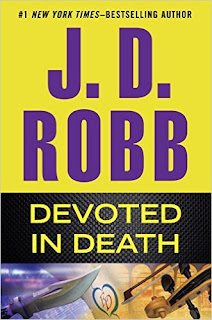 Ella-Loo and Darryl were fated to be together.  The moment he walked in to the bar where she was waiting tables (and turning tricks) and their eyes met, stars exploded and fireworks went off.  They started their cross-country journey to NYC that very night, but when their car broke down on a secluded country road they ended up accidentally killing the Good Samaritan who stopped to help them.  For Ella-Loo and Darryl stars exploded and fireworks went off all over again … it was a rush … an aphrodisiac!

Leaving a trail of bodies from Arkansas to New York City, their handiwork finally crossed paths with Det. Eve Dallas.  Eve would not let this rest.  The intertwining hearts they carved with their initials was the only clue she had to their identity, but she knew eventually she would lock them up.

Once again the reader goes on a case with Eve, Peabody, Roarke, et al to catch the bad guy.  With this the 41st (or is the 42nd?) installment in the “In Death” series one would think that the books would be getting tired?  Admittedly, there have been some duds and the crime solving is getting to be a little cookie-cutter but Ms. Robb miraculously manages to find a way to keep things fresh.  “Devoted in Death” achieves this with the introduction of a new character – one Detective Banner – a gold old boy from the south on the trail of the same killers.  I enjoyed how Eve’s tough New York cop clashed with and then compliments Detective Banner's more relaxed southern ways.  Carmichael and Santiago, on assignment following leads, traipsing around the backwoods in the southern states gave this installment in the series the comic relief it usually gets from Mavis and Nadine.  They were missed, but the new characters (Banner and FBI agent Zweck) stood in well.

I never thought I would find myself typing these words but the character I am beginning to think I wouldn’t mind seeing less of is Roarke.  He is starting to get really annoying.  I find him turning more and more into a controlling, know-it-all husband/sidekick rather than the sexy, black Irish, richer than god, I own half the universe husband and sex toy.  Yes, he’s the electronics whiz and all that, but geez, let Eve decide for herself what she is going to wear in the morning, what and when she is going to eat and STOP following her around on her cases.  (All the reasons I don’t watch Castle!)  Each book unfailingly has one tiff between Eve and Rourke because things can’t be paradise in a marriage all the time and it gives Ms. Robb an excuse to write a good make-up-sex scene.  In this book the argument was lackluster, as if the author herself couldn’t muster the enthusiasm for something “knock-down-drag-out” followed be any equally (yawn) boring make-up scene.

If left to my own devices I would probably give this series a rest but my BFF is totally devoted to it and buys the books as soon as they hit the shelves.  She finishes it off in record time and passes it one me.  All in all, I do enjoy them so it’s not much of an obligation to read them but I’d like to see something shake up the series.  Maybe give George R.R. Martin a call for some advice on how to kill off a beloved character?

ABOUT THE AUTHOR (from www.jdrobb.com) 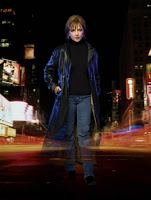 With a phenomenal career full of bestsellers, Nora Roberts was ready for a new writing challenge. As her agent put it, like Pepsi, Diet Pepsi, and caffeine-free Pepsi, a pseudonym offered her the opportunity to reach a new and different group of readers. The first futuristic suspense J. D. Robb book, Naked in Death, was published in paperback in 1995, and readers were immediately drawn to Eve Dallas, a tough cop with a dark past, and her even more mysterious love interest, Roarke.

The series quickly gained attention, great reviews, and devoted readers. Since the debut of Loyalty in Death (the ninth In Death book) on Halloween 1999 on the New York Times bestseller list, every J. D. Robb title has been a New York Times bestseller. While fans had their suspicions, it wasn’t until the twelfth book in the series, Betrayal in Death (2001), that the publisher fully revealed that J. D. Robb was a pseudonym for bestselling powerhouse Nora Roberts. Unmasked, Nora Roberts fans who hadn’t yet picked up one of the Robb books were quickly playing catch-up.

Nora has written 165 New York Times bestsellers including 23 written as
J. D. Robb and one written together with J. D. Robb.

Innocent in Death was the first book written as J. D. Robb to debut at #1 on the New York Times bestseller list on March 11, 2007