The Santa Claus Man - A Review 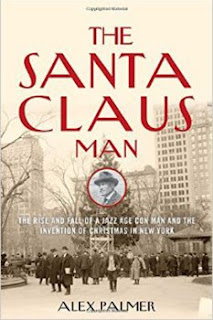 This book is not just a biography but also a history of NYC and Santa Claus.

Not many people would recognize the name John Duval Gluck but for almost 15 years he was “Santa Claus” to the poor and underprivileged children of New York City.  John Gluck started out working in the Customs and Brokerage business his father had founded and although he was good at his job (as he proved to be in all his undertakings) his heart was not in the work.  He tried his hand briefly as a Public Relations and Promotions man, but when a bullfight he organized went terribly wrong he gave that up too … temporarily … fundraising and public relations turned out to be his true calling.

When Mr. Gluck heard about all the Santa letters from children first lying neglected in the dead letter office of the post office and then being thrown in the trash he applied to be the person allowed to answer those letters.  Approval from the post office came for one reason and one reason only – he was the only person who applied for the position – and with that “The Santa Claus Association” was born. 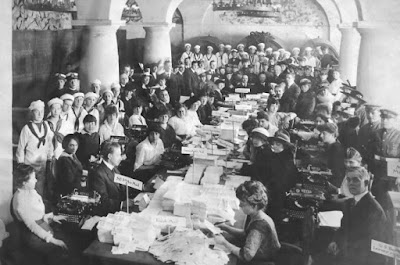 With modest beginnings as a true charity Mr. Gluck used his business aplomb to organize and prove the validity of the letters, bring donors on board and acquire volunteers to answer letters and distribute gifts.  It was a rollicking success, allowing thousand of children to enjoy a happy Christmas that otherwise may not have happened for them.  Everyone chipped in; from the mayor to sailors on leave.  No one wanted to see children go without especially when letters contained requests for a gift of coal, not because the child had been naughty but because that child was cold.  No money changed hands; it was entirely a volunteer operation, with the only cash donations required for the purchase of postage stamps.  Mr. Gluck soon became “The Santa Claus Man”, earning the praise and support and rubbing shoulders with the not only the NYC upper crust but with celebrities such as Douglas Fairbanks and Mary Pickford. 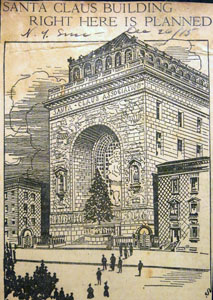 He was a hero to the children of NYC, but unfortunately, it turned out that this hero had lead feat.  Mr. Gluck also had the unenviable talent of being a first class con man.  Plying his trade as a fundraiser to various organizations, among them the gun toting boy scouts of the time, he managed to make a very nice living for himself charging exorbitant fees for his services or, even more easily done, simply skimming money off the top.  Despite being investigated several times by various agencies his glib tongue and talent for evasion kept him always ahead of the law.  When his less than admirable talents inevitably turned to The Santa Claus Association, rather than inviting donors to deliver gifts personally to the children he asked for cash donations the reputation of the organization began to falter resulting in the post office officially revoking his right to answer Santa Claus’ mail.  When forced to account for more than $100,000 in donations for which he could not provide receipts or explanations, plans for his lavish Santa Claus Association building were scrapped and Mr. Gluck, with his third wife, quietly left the hustle and bustle of NYC to live an unassuming life of comfortable retirement in Florida. 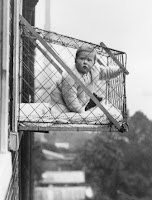 Although this book is about John Duval Gluck it is also a history of New York City in the roaring twenties.  From the restructuring of famous market places to the construction of buildings iconic today it was a time when money seemed to flow freely.  New York City was crowded as never before and inventions such as wire cages to allow infants to be suspended from apartment windows flourished.  Celebrities were worshiped and money could be made.  It was also the time when Santa Claus evolved from being skinny St. Nick, who brandished a twig to punish naughty children to the jolly elf imagined by Clement Moore.  The time was ripe for someone with Mr. Gluck’s, shall we say, talents?

This book is certainly an ambitious undertaking for any author, but Mr. Palmer had some connections (Mr. Gluck being his great-granduncle) and access to photos and memorabilia collected by family members to aid him in his research.  He gives us a solid history of not only Mr. Guck and the “Santa Claus Association” but expands his research and writing to the history of NYC during the “roaring twenties” and part of the thirties.  This was an interesting, well written and excellently planned out book with none of the sugar coating sometimes found in biographies written by family members.  Mt. Palmer shares the good, the wonderful and the not so proud moments of Gluck's escapades.

It is a little early for Christmas, but I am still considering this a Christmas read so ... solidly four bookish Christmas trees for “The Santa Claus Man”.

* I received a copy of this ebook at no charge from the publisher, Rowman & Littlefield, Globe Piqot/Lyons Press via Netgalley in exchange for an honest review * 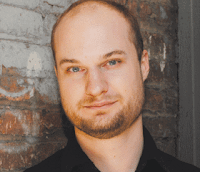 Alex Palmer is a journalist and author living in New York City. He covers business, travel, culture, and pop culture, and his work has appeared in New York Daily News, United Airlines'Rhapsody, Slate, Vulture, Time Out New York, Publishers Weekly, The Rumpus, Brandweek, The Hollywood Reporter,and many other outlets.

The son of two teachers, his love of learning and sharing surprising stories behind familiar subjects has led him to become a secret-history sleuth. His forthcoming book, The Santa Claus Man: The Rise and Fall of a Jazz Age Con Man and the Invention of Christmas in New York (to be published by Lyons Press in October 2015), gave him the chance to delve into the unexpected roots of Christmas in America and controversial history of Santa letters, through the true story of a New York City huckster — a man who also happened to be Palmer's great-granduncle. Researching the book also allowed him to dig into the surprising history of his own family, meeting wonderful relatives he did not know he had and learning the strange backstory of the man who for 15 years was the sole person authorized to answer Santa's New York mail. Palmer curated an exhibit about this Santa Claus Association in 2012 for Brooklyn's City Reliquary Museum, earning attention from the Village Voice,Time Out New York, and inspiring a memorable segment on WNYC.

His previous book, Weird-o-pedia: The Ultimate Collection of Surprising, Strange, and Incredibly Bizarre Facts About (Supposedly) Ordinary Things, was published in 2012 by Skyhorse Publishing, and offers up a wealth of unexpected facts of familiar things. His first book, Literary Miscellany: Everything You Always Wanted to Know About Literature, takes a look at some of the more colorful aspects of great writers and their works, and was published in 2010 by Skyhorse.