Second Star to the Right

SECOND STAR TO THE RIGHT by Mary Alice Munroe 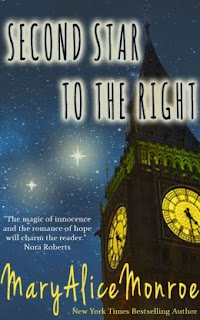 Wendy is in her nineties now but she still sits at the window of 31 Kensington Park Gardens waiting for Peter to come back for her.  Her daughter believes her to be beyond eccentric and cannot wait to be able to move her into a home.  With only a nurse to take care of her, “Crazy Wendy’ really has nothing to do but sit at the window and paint her murals on the wall.  But when Faye O’Neill moves into the main apartment of the converted Victorian things begin to change.  Faye has no time for fanciful stories.  She has moved to London with her two children to kick-start her career after leaving her abusive ex-husband.  Her children however become totally enamored of Wendy and her stories.  They also find a friend in handsome downstairs neighbor, Jack, a man with a few a few issues of his own and a lot of questions; one of them being why is there a picture of him as a little boy painted into Wendy’s mural?

The harder Faye tries to resist both Wendy and Jack, her children seem happiest when they are around the two unusual adults sharing the old home.  Eventually, of course, she is drawn in to their magical world.  But when her children disappear on a night when Wendy is watching them Faye cannot buy into the fantasy anymore … it is simply not possible that “Peter Pan” has abducted them.  Is it?

“Second Star to the Right” is a fun, heartwarming read perfect for a Sunday afternoon in a comfy chair with a cup of tea … read the book and find out why it MUST be tea.  It brings Mr. Barrie’s story back to life in a charming manner.  All the expected characters make guest appearances that seem entirely plausible … even Nana.  Of course there is a romance and even a little bit of a mystery to solve.

A charming and magical little read so why only three stars.  As much as I admire Faye’s determination to make a successful life for herself and her children her willingness to foist her children off onto both Jack and Wendy left me feeling a little tepid about her character.  She did redeem herself a little in the end so, maybe, three and a half stars then. 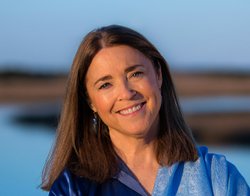 Mary Alice Monroe is the author of nearly two-dozen novels, several non-fiction titles, and children's books. Her body of work reflects her commitment to the natural world through literature.

Monroe has served on the faculty of numerous writer's conferences and retreats.  She is a featured speaker at events, both literary and conservation.

Her books have achieved several bestseller lists, including the New York Times, SIBA, USA Today and are sold worldwide.  Her children’s books received several awards, including the ASPCA Henry Bergh award.  Monroe was awarded the SC Center for the Book Award for Fiction and the International Book Award for Green Fiction. In May 2014, she was awarded the Career Achievement Award for mainstream fiction by RT Book Reviews, SW Florida's Distinguished Author Award, and the South Carolina Book Festival Literary Excellence Award.