EVICTED: POVERTY AND PROFIT IN THE AMERICAN CITY by Matthew Desmond 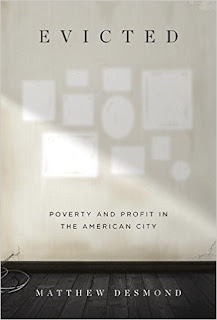 There are a lot of occupations that, for various reasons, I could never work in … I’ve just added landlord to the list.

Sadly, this book is an account of what life has come to for those families and individuals living below the poverty line in a major American city – and doubtless everywhere.  From May 2008 through December 2009 Mr. Desmond lived in a poorly tended trailer park and a “should be condemned” apartment in the seedier sections of Milwaukee.  He lived this way to complete his ethnographical study on evictions.  Focusing on two landlords and the lives of eight families, this book paints a picture of despair.  As Mr. Desmond points out in his final notes, when the prices of other commodities go up, although not easy to deal with, solutions can be made.  If the price of beef goes up we eat less beef.  When the price of oil goes up – we drive less.  When the price of heating fuel, water and rent goes up, what happens?  People have to make hard choices between paying for food and utilities or paying their rent.  If the rent does not get paid – eviction happens.  When you are already living in substandard housing and end up being evicted where do you go?  That’s the crux of this study.  What happens to these people?  What solutions can they possibly have to their crisis when their belongings are sitting on the curb and no other home can be attained?  This is happening to not only individuals who refuse to help themselves, but also to families with children who are trying the best they can every day.  Evictions are not limited to any particular gender, racial or ethnic group.

Having lived among those being evicted and getting to know them on a personal level Mr. Desmond gives us an emotional telling of the lives these people live.  They have dreams, they have goals and they have, (quickly dwindling) hope.  They are caught in a vicious cycle of poverty, eviction, moving to an even more undesirable home only to be evicted again … each cycle making it more difficult to pick themselves up and start again.  Often an eviction means a job loss as well because it means a move to another neighborhood with no transportation to allow for the commute to the already low paying job.  Although there are some very unhappy endings I was surprised and impressed with how many of them did just that … got up and kept moving … because really, what other choice is there?

The landlords?  I truly wanted to get on my soapbox shouting “slumlords”, “heartless” and “shylocks” but in all honesty, despite their actions and as Mr. Desmond points out, they are running a business; a business that provides their livelihood and pays their bills.  Compassion doesn’t put food on the table.  It was hard to read about Sherrena and her partner vacationing in the Caribbean when one of their tenants, Arlene, has $20 a month left to buy food and necessities after paying rent and utilities and ends up evicted a few days before Christmas; or legless Lamar who looks after his boys alone and tries to work off his rent debt by doing odd jobs around the building.  From the book blurb “They loathe some of their tenants and are fond of others, but as Sherrena puts it, “Love don’t pay the bills.”

I appreciated that in writing this book Mr. Desmond used a conversational tone.  It made a book about a difficult subject a little easier to read.  He did not overwhelm his reader with pages and pages of statistics and personal observations although that information is definitely available in the author’s notes at the end of the book.  I also respect the fact that although Mr. Desmond was conducted a social study for this book he freely admits that while living in the same buildings and neighborhoods as his subjects he found it difficult at times not to reach out a helping hand.  He stood by his principals making the, probably wise choice, never to help financially but did offer the occasional ride or food item to those in a most desperate circumstance.  In my opinion that does not make him a poor researcher, it makes him human.

When reading books of this nature, as a reader I am often left wondering about the subjects of the study.  Sometimes the time frame for the study ends; the researcher collates the data writes the paper and/or book and sometimes shares possible solutions.  Mr. Desmond does share some possible paths his research uncovered that could be taken to make evictions a less prevalent problem but most importantly to me Mr. Desmond gave this reader the privilege of knowing the outcome for some of the people I felt like I had come to know.

This book was heartbreaking.  As I sat in my comfortable, warm home I was reading about families with children being thrown out of their already less than comfortable homes, their belongings either left behind, involuntarily being put into storage they could not afford (so after non-payment they lose it) or simply being left behind in lieu of rent.  Was this subject difficult to read about?  Absolutely?  Despite the fact that this book/study centers on Milwaukee it is an issue prevalent everywhere so I would highly recommend this book not only to people in all aspects social service, but especially to anyone who has ever been tempted to judge someone less fortunate than themselves.

This book is scheduled to be released on March 1, 2016 and can be preordered on Amazon.com or from your favorite bookseller.

ABOUT THE AUTHOR (from Penguin/Random House) 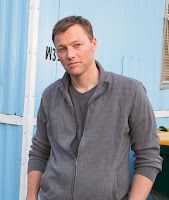 Matthew Desmond is the John L. Loeb Associate Professor of the Social Sciences at Harvard University and codirector of the Justice and Poverty Project. A former member of the Harvard Society of Fellows, he is the author of the award-winning book, On the Fireline, coauthor of two books on race, and editor of a collection of studies on severe deprivation in America. His work has been supported by the Ford, Russell Sage, and National Science Foundations, and his writing has appeared in the New York Times and Chicago Tribune.

In 2015, Desmond was awarded a MacArthur “Genius” grant.