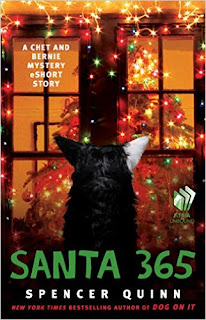 Bernie and Chet, of the Little Detective Agency, put Plumpy Napoleon away for running a Ponzi scheme netting Plumpy over one million dollars.  Because of prison overcrowding, after only eight months behind bars Plumpy is standing in Bernie’s driveway hoping to pitch his new “business plan” – a Christmas party planning service.  For a nominal fee Plumpy will plan a party with all the trimmings; the tree (for a nominal fee), the food (for another slight fee increase), the gifts (with the platinum package) and for Bernie, he’ll even throw in a real live elf or two.  Since it was Bernie’s Christmas to have his son Charlie he gives Plumpy’s service a try.  The party is a success but when everyone clears out afterwards Bernie discovers his safe has been cleared out too.  Bernie and Chet are soon on the trail of the culprit and discover some surprises along the way.

Bernie’s mom shows up unexpectedly, we get to know Charlie a little better and revisit with the rest of the characters from the series.  Chet, as usual is the unreliable, yet lovable, narrator.  For fans of the series this e-short is a fun must-read – just in time for the holiday season.

I’m putting this one on my Christmas Reads shelf so give it four bookish trees.

This short story is being released on November 24, 2015 and is available for pre-order on Amazon.com or from your favorite local bookseller.

Before receiving this book for review I had already purchased three other Chet and Bernie short stories that I had not gotten around to reading yet.  Since I was reviewing the above book I felt it was the perfect time to read the others as well.

A CAT WAS INVOLVED

In every book of this series Chet, although his dog-memory and attention span is admittedly short term when it comes to most things, mentions the cat incident that caused him to fail the final test in K-9 school and cost him his graduation.  That was bad.  The cat incident almost landed Chet at the pound but it also allowed Chet to meet Bernie for the first time.  That was good.  It was love at first sight for both of them, a match made in heaven and the birth of the partnership that makes up Little Detective Agency.

Five stars for this one because it finally gave me the whole story behind the infamous “cat incident”.

A beautiful blonde approaches Bernie about investigating her cheating boyfriend.  Right away Chet gets a bad feeling about the case and it’s not the kind of case they usually work.  But Lt. Stine had recommended Bernie to this young lady so Bernie takes the case.  One day of work, $600 in the Agency’s coffer and the case looks done – until another client shows up asking Bernie to investigate the same cheating boyfriend, this time the referral came from Leda, Bernie’s ex-wife.  Some interesting twists and turns and then suddenly the title’s meaning becomes quite clear … truly the perfect definition of the word vengeance.

Five stars for this short story because I loved the twists and turns and especially the final scene.  It was completely fun to read.

Bernie and Chet are having a well-deserved morning of sleeping in when a knock on the door wakes them both up.  Well, it wakes Chet who rouses the still snoring Bernie.  Unexpected knocks are very seldom good news and this is no exception.  At the door is Daniel Parsons, their next-door-neighbour and it seems Iggy, his little dog and Chet’s good friend, has disappeared under very mysterious circumstances.  Chet is on instant alert and Bernie wants to help old Mr. Parsons.  After a hospital visit, some disappearing jewellery, a really unusual motorcycle cop and new head of hospital security Bernie and Chet, as always, close the case.

While I enjoyed it this was my least favorite of the four short stories I read but fun none-the-less so three stars for this one.

“A Cat Was Involved” is obviously the start of the series so can certainly be read as a stand-alone story.  While the others slide in comfortably between the exiting books in the series they can certainly be read independent of the books and still be entertaining and easy to follow.  Chet makes sure of that by giving the reader just enough back-story to make it work. 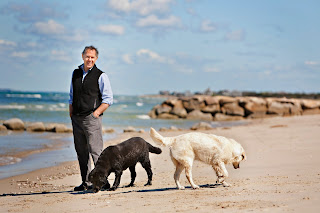 ABOUT THE AUTHOR (from the final pages of Santa 365)