Two more additions to this year's list of "Halloween Reads".  While neither of these is definitively a "ghost story" they both have cringe-worthy moments and they both have "ghost" in the title so I am including them. 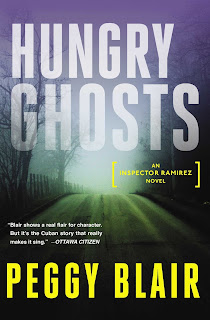 Ricardo Ramirez is a homicide investigator in Havana.  It’s not a popular profession to have in Cuba nor does it come with much government support in the way of state of the art labs, DNA testing or even pencils.  However, Detective Ramirez has his own secret weapon … the ghosts of the victims he will be investigating.  Whenever Ricardo sees a new apparition he knows that a new case is about to come his way.  Unfortunately, these ghosts cannot speak to him, but somehow, they manage to help.

The latest victim appears when the body of a dead prostitute is found with nylon stockings tied in a bow around her neck … the same MO as his one and only unsolved murder.

Quick switch of locations where Charlie Pike finds a similar victim, also with stockings tied into a bow around her neck, on a First Nations Reserve in Northern Ontario.  Can these cases possibly be related?  Is there really an international serial killer on the loose?

For me this book was interesting on so many levels and, surprisingly, the ghost story was the least of them.  While the ghost added color and some comic relief to a rather grisly murder mystery, had the book been written without the inclusion of the apparitions it would have worked just as well.  I enjoyed the glimpse into the life of the local inhabitants of Havana that is a far cry from the tourist experience.  Contrasting and comparing Detective Ramirez in Cuba to Detective Pike on the First Nations Reserve was eye-opening … so many of the same issues face the population in both areas.  Ms. Blair incorporates the comparison so smoothly into her narrative that it never detracts from the story, yet makes a strong statement never the less.  It thoroughly added to my enjoyment of this well written book.  There were enough plot twists and red herrings to keep me turning the pages at a pretty brisk pace and the ending was a revelation I didn’t really see coming until Ms. Blair places her reader in the midst of the action.

I enjoyed all of the characters but have to give a special shout-out to the portrayal of Hector Apiro, the coroner.  He is one of the most original characters I’ve read in a long time and were I casting this as a movie Peter Dinklage would be my first and only choice.  If that’s not teaser enough to tempt you to pick up the book I don’t know what is.

This is the third in the Inspector Ramirez series and the first I have read.  It held up well as a stand-alone book and despite my protest of not wanting to get involved with another series I will be picking up book one and two somewhere along the way.

There were specters, so I am including this in my Halloween reads and giving it 4 ghosts … not as a Halloween read but as a very good book overall.

ABOUT THE AUTHOR (from her blog)

I am a lawyer, realtor, and author living in Ottawa, Canada. I was a defence lawyer and prosecutor, but most of my legal career was spent in Aboriginal law. But my Inspector Ramirez mysteries series is set in Havana.

I spent  Christmas in Old Havana in 2006. I saw how bored the young police officers were, slouched against lamp posts, waiting for a crime, any crime to occur. I went to astonishing art museums, the book market (hundreds of thousands of used books), cigar and rum factories, artists’ stalls, and, of course, the Malecon.
I visited most of Hemingway’s favourite bars (no easy task — they’re all over the place) and learned how to make the perfect mojito.

It is quite possibly the most interesting place I’ve ever been. How could I resist writing about it?

A HEAD FULL OF GHOSTS by Paul Tremblay 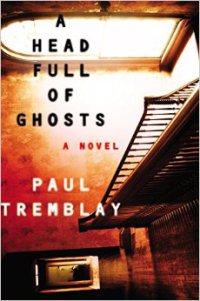 We meet Merry as an adult just as she is about to lead a journalist/author into her childhood home, a home that became a house of horrors for Merry.  When she was 8 years old her beloved older sister Marjorie began to show signs of instability – the nighttime stories she had always invented for Merry took on a dark cast and Marjorie herself became withdrawn, dark and moody.  Well, Marjorie was a teenager and these things were par for the course.  Or were they?  While Marjorie’s mother insisted that it was something visiting a counselor could take care of her father was not so sure and as his descent into unemployment and malaise deepened his religious convictions increased so he decided an exorcism was more along the line of what Marjorie needed.

Somehow the Barrett family and their troubles came to the attention of the media and before they knew it, they were the stars of a reality television show, “The Possession”, centered around Marjorie’s “affliction” and upcoming exorcism.

All of the events that unfolded in the Barrett household are told in alternating narratives of Merry discussing her past with the journalist/author, snippets of a blog Merry wrote (which were the parts of the book I enjoyed the most) and recounting the filming of the reality show as Merry rewatches episodes.

Was it possession, mental illness or playing to the media?  Who was the ill member of the family?  Marjorie?  Mr. Barrett?  Or, quite possibly someone else altogether?

I can’t honestly admit that I enjoyed this book as much as I expected to.  The writing is excellent.  I think Mr. Tremblay did an admirable job of capturing Merry’s young voice and then carrying that through to the present and an equally good job with Marjorie as the “possession” overtakes her.  And yes, there were those creepy unexplainable moments and yes, the “demonic possession” of Marjorie did seem like it was a real possibility.  I’ll even admit to a bit of angst about the actual exorcism (flashbacks to “The Exorcist” I think) but overall this book didn’t wow me even as a psychological thriller.

Overall, as one of my Hallowe’en reads gets 3 ghosts.  Just not my cup of tea, I guess.

ABOUT THE AUTHOR (from his blog) 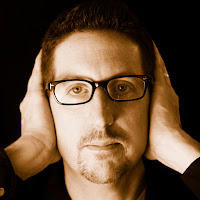 Paul Tremblay is the author of the novel A Head Full of Ghosts. His other novels include The Little Sleep, No Sleep till Wonderland, Swallowing a Donkey’s Eye, and Floating Boy and the Girl Who Couldn’t Fly (co-written with Stephen Graham Jones).

Paul is very truthful and declarative in his bios. He once gained three inches of height in a single twelve hour period, and he does not have a uvula. His second toe is longer than his big toe, and yes, on both feet. He has a master’s degree in mathematics, teaches AP Calculus, and once made twenty-seven three pointers in a row. He enjoys reading The Tale of Mr. Jeremy Fisher aloud in a faux-British accent to children. He is also reading this bio aloud, now, with the same accent. He lives outside of Boston, Massachusetts and he is represented by Stephen Barbara, Inkwell Management.