Forgot your Book? Here's a Solution!

Imagine being without your paperback or ereader (because who would need it when you are going to do dinner and a movie with a friend?) and all of a sudden you have an unexpected fifteen-minute wait for said friend who is stuck in traffic.

At the push of a button you can have a short story in your hands to occupy your time.  You can choose a one, three or even five minute read. Best of all it’s free!

Granted, I can see some problems with these ... vandalism, abuse ... but not anything more than normal vending machines or free little libraries face.  What appeals to me is that it could feasibly put some reading materials in the hands of people who may not be able to afford other sources.  It may even introduce some people to the idea of reading in their "spare" time?

The following article found at ibn.live describes the premise and technology behind this innovative idea. 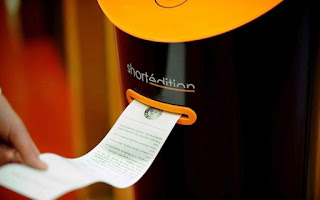 New Delhi: Technology has truly invaded our lives; from tablets to smartphones, there is no time which could be called a ‘no screen time’. Whether we are travelling, eating, waiting at a public place, the smartphone never leaves our gaze. However, a city in France wants to change that.

Waiting at public places is one thing that we, humans, do not find as an exciting task to do. Just to kill that waiting period, we have enough distractions like a smartphone, an e-book, or a tablet. But Grenoble, capital of the French Alps, wants to help passerby utilise their monotonous waiting time by reading short stories which are ‘dispensed’ from a machine.

Yes, you read it right. Grenoble has come up with an interesting experimental project through which it not only aims at helping people do something better than fiddling with their mini gadgets, but also try to bring back the reading culture that is lost to the technological world.

The ‘short story dispensers’ deliver good quality popular literature to people waiting in public spaces, just like the way chocolates and chips are dispensed. However, the best part about these dispensers is they are free to use.

The initiative is a collaborative effort between the founders of publishing company Short Edition and the green party mayor of Grenoble, Eric Piolle, Konbininotes.  In all, there will be eight machines spread across the town: at the town hall, the tourist office, libraries and in social centers.

Users have the option to choose the length of the literature depending on the time they have to kill. The ‘three minute’ format, for example, takes the form of a piece of paper that’s 8 X 60 cm in size, while the ‘five minute’ version could be double the size.


So the next time you have to wait for your friend to arrive, you would have enough stories to tell when you meet.

The next article from rt.com/news goes into a little bit more detail about the “who and how” of these machines. 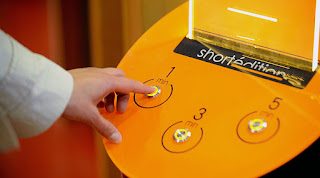 The innovation-friendly Green party mayor of Grenoble, Eric Piolle, has ordered eight vending machines to be placed in the heart of the city that will dispense literary short stories to pedestrians for free at the push of a button.

The big orange terminals have three options – stories of 1, 3 or 5 minutes – that are printed out on thin recycled paper reminiscent of a lengthy shopping bill and can be tucked into a wallet.

“The idea came to us in front of a vending machine containing chocolate bars and drinks. We said to ourselves that we could do the same thing with good quality popular literature to occupy these little unproductive moments,” Christophe Sibieude, a digital publisher who pitched the idea to the city council, told AFP.

Sibieude already runs a successful literary smartphone app called Short Edition that has over 140,000 subscribers who will both read and write their own stories for the printouts.


The idea would have been impossible, however, without the input of the mayor – a dashing 42-year-old business-executive-turned-environmentalist. With a population of over 150 thousand, Grenoble is the largest French city to entrust itself to a Green politician.

“We are trying to re-imagine the city center as a place of shared experiences,” Piolle said to AFP. “We are trying to launch a revolution, and the objective is to build a wider and calmer downtown area.”

Piolle has made international headlines several times since his election for controversial decisions, such as ordering that all street advertising be banned from the city center and replaced with trees and hedges. He has also cut the speed limit inside the city to 30 km/h and introduced more pedestrian spaces.

Several initiatives, such as turning popular shopping streets into bike lanes, have met with severe opposition from local traders, who believe his plans could drive business away from the city center. 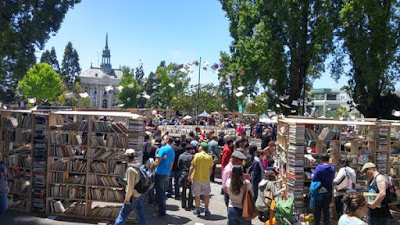 Although Piolle’s book dispenser plan is innovative, similar stunts to promote reading have already been attempted in other, usually more cosmopolitan, urban centers. Toronto’s Public Library has created pop-up kiosks offering free books at busy train stations, while in California an art collective built a structure out of 50,000 books, which could then be taken away by visitors. By the end of the exhibition, titled Lacuna, almost none remained.


But Short Edition hopes its invention will be more than a one-off.


“We are getting a lot of requests from all over the world for this invention. Once we will sort out our costs, we will ship these machines anywhere – for maybe a month, several months or even for a few years,” Quentin Pleple, one of Short Edition’s founders, told RT.

** On a personal note:  I like how this Green Party Mayor Eric Piolle thinks!