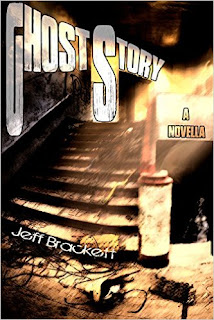 I’ll start this review by saying that I started reading this story this morning with my coffee and then was almost late for work.  I did not want to stop reading until the end.  But that’s okay, its “Casual Friday” – who needs to do make-up and hair anyway?

Years ago the hunting lodge caught fire and since then it has stood neglected and abandoned with rumors swirling about ghosts.  Sima and her team of paranormal investigators begin to set up their equipment and prepare to spend the night investigating this haunted site.  It immediately becomes apparent that someone, or some-THING, doesn’t want them there.

Mr. Brackett knows how to write a short story.  He pulled me in slowly with the first few pages and took the time to tell me just enough about the characters to get me to like them.  How can you not start to care about a couple that makes a co-worker pine for “a love like that”?  Then, BAM, he started the bumps and moans.  The coffee I had in front of me turned cold because I didn’t want to take my eyes off the page.  Did the ghoulies get ‘em?  Sorry, can’t tell.

In his author’s note at the end of the book Mr. Brackett explains that he is not a writer of horror.  He was asked to submit a story to a planned anthology and was reluctant to take on the challenge because, once again emphatically, he is not a writer of horror.  Well, oh boy, you sure could have fooled me.  This is one of the most spine chilling short stories I have read in a good long while.  I have mentioned before that I am on a never-ending quest to find THE excellent ghost story.  Let me tell you – Mr. Brackett’s “Ghost Story” has made the list!

I don’t always review stand-alone short stories because it seems like a bit of a cheat to add them to my yearly book count, but this one deserves to be reviewed.  I received this at no charge in an Amazon promotion but would not have regretted it one bit if I had had to pay for it.  So, in case I haven’t made myself clear … did I like this novella?  As a Halloween read this year it gets five ghosts all the way!

ABOUT THE AUTHOR (from his Amazon page) 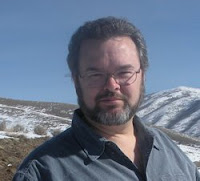 Jeff Brackett is the author of "Half Past Midnight", "The Road to Rejas", and "Streets of Payne". After having lived almost his entire life in and around the Houston, Texas metroplex, circumstances recently brought him to Claremore, Oklahoma, where he, his wife, and two dogs (Bella and Cricket) have settled in to a smaller house, with a much larger yard. They are all adjusting to the new lifestyle quite well, and Jeff has even begun learning to garden.

His proudest achievement, though, is in having fooled his wife into marrying him almost thirty years ago, and helping her to raise three wonderful children. He is now a grandfather twice over. 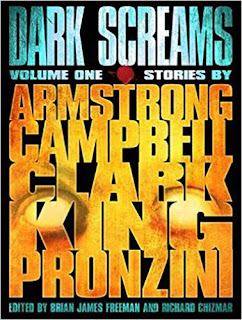 I picked up this three-disc audio book at the library off their “Halloween Reads” shelf on the basis that it included short stories by Stephen King and Kelley Armstrong, two members of my favorite authors list.  The library had it right – it was definitely “Halloween-y”.

The stories and authors included were:

WEEDS by Stephen King.  Jordy Verill watches as a meteorite crashes into his property and imagines the money he will make by selling bits and pieces of it.  He should have imagined something much worse.

I know I have read this story in another anthology (possibly with a different title?).  It was good the first time I read it and it was still good as I listened to it this time.  Mr. King always manages to creep me out.

THE PRICE YOU PAY by Kelley Armstrong.  Kara and Ingrid have been friends since preschool.  They have shared a lot of experiences both good and bad … very bad.  Can their friendship be renewed after a years long separation?  Or is the price of some things too high?

Ms. Armstrong does an admirable job with this short story.  She kept my interest from the get go and never let up until the very end.  I had an inkling about where the story was going, but that never detracted from reading every last word.  I enjoyed it.

MAGIC EYES by Bill Pronzini.  When you know you are the only sane person in an asylum whom can you tell without sounding insane?

The first half of this story didn’t really have me listening all the intently but then came the point when reality and insanity crash head long into each other.  After that it had my undivided attention.

MURDER BY CHAINS by Simon Clark.  Why was he waking up in an underground vault and why was he chained to a “grunting Goliath” of a man that he is fairly certain is a murderous lunatic.

As with the last story this had me less than enthralled through most of it, but did give me a little jolt with the ending.

THE WATCHED by Ramsey Cambell.  From the blurb on the back of the book … “Little Jimmy gets a glimpse of the cold truth when he finds out that it’s not always what you see that can get you into trouble; it’s who knows what you see.”
This one did absolutely nothing for me other than make me glad it was the last story in the anthology.

Overall I was a little underwhelmed by this one.  Yes, it had a King story but it was a repeat.  In my opinion Ms. Armstrong’s story was the strongest of the five and the other three left me with nary a goose bump.  As a Halloween Read I give it three ghosts.