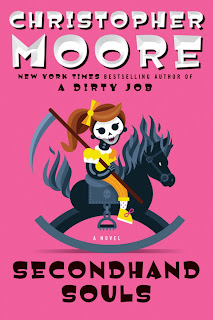 I don’t even know where to start on a synopsis for this book?  This sequel to “A Dirty Job” is an “everything but the kitchen sink” kind of book brilliantly pulled together by the twisted mind of Christopher Moore.  He just makes it work and makes me laugh through the whole thing.

Since his own untimely “death” Charlie Asher has been stuck in the body of a 14-inch tall meat puppet, cobbled together by Audrey, his Buddhist nun girlfriend.  He is patiently waiting for a suitable body to become available so he can resume his life.  His daughter Sophie is living with his sister and her partner not knowing her father is still “alive”.  She still remembers not to point and utter the “K” word but is she the Big Death anymore?  Doesn’t seem so since the hellhounds appear to have deserted her.

When Charlie hears that souls are not being collected but are disappearing instead knows he has to do something about getting a body … and do it quickly.  Enter all the regulars from “A Dirty Job”.  Alphonse Rivera (retired cop), Lily, The Emperor of San Francisco and Minty Fresh all join in to get the body Charlie needs but then they learn the truth about all the ghosts hanging around the San Francisco Bridge.  All this while Sophie keeps mumbling about the coming battle for the future of human souls.

Throw in some Buddhist beliefs, Egyptian gods, squirrel people, and a taser-carrying Banshee and you’ve pretty much got this book covered.

It’s been 6 years since the publication of “A Dirty Job” and since I rarely do rereads I was concerned starting this one.  I needn’t have been.  Once the first few paragraphs were read I was right back at home with Mr. Moore’s well plotted insanity.  As expected this book is filled to the brim with profanity, bizarre situations, colorful characters, creatures from the dark side and death, lots of death – yet – its also a book filled with family and friends who will do ANYTHING to help each other out and a love story that will make you sigh.  And then there’s Sophie!  Foul-mouthed, disrespectful, cute, loyal, in the advanced 5th grade reading class, ice-cream loving Sophie.  She has become my favorite character in this book and I can see hope that there might be a possibility of a third book in the series with Sophie as the main character.

“A Dirty Job” was one of the first books I listened to on audio and one of the first I downloaded on “Overdrive” so it just seemed right that, although I was lucky enough to score a signed hardcover, I should listen to “Secondhand Souls” on audio as well.  Therefore I must give praise to narrator Fisher Stevens.  His ability to give each character his/her own voice is truly amazing.  Going from Sophie’s cute cussing to Minty Fresh’s ghetto-slang to the squirrel people’s cult chanting cannot be an easy task.  Excellent job!

I thoroughly enjoyed this book and highly recommend it as a must-read for fans of Christopher Moore.  For those few readers not familiar with Mr. Moore – I humbly suggest starting with “A Dirty Job”. 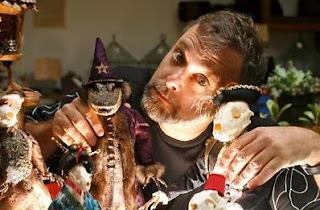 Christopher Moore is the author of fifteen novels, including the international bestsellers, Lamb, A Dirty Job and You Suck. His lastest novel, Secondhand Souls, will be released in August 2015.

Chris was born in Toledo, Ohio and grew up in Mansfield, Ohio. His father was a highway patrolman and his mother sold major appliances at a department store. He attended Ohio State University and Brooks Institute of Photography in Santa Barbara. He moved to California when he was 19 years old and lived on the Central Coast until 2003, when he moved to Hawaii.

Before publishing his first novel, Practical Demonkeeping in 1992, he worked as a roofer, a grocery clerk, a hotel night auditor, and insurance broker, a waiter, a photographer, and a rock and roll DJ. Chris has drawn on all of these work experiences to create the characters in his books. When he’s not writing, Chris enjoys ocean kayaking, scuba diving, photography, and painting with acrylics and oils.

He lives in San Francisco.

ABOUT THE NARRATOR (from IMBD)

Fisher Stevens moved from his native Chicago to New York at the age of 13 to pursue an acting career. He tried, unsuccessfully, to get any kind of job and was, he recalls, even rejected as extra for a Crest commercial.

Despite having lived in New York City for more than a decade, where, with some other actors, Stevens has started an off-off-off Broadway theatre company called Naked Angels, he insists that he is still a fan of the Chicago Cubs.