PAX by Sara Pennypacker and illustrated by Jon Klassen

Be forewarned … I want to gush much love for this middle-grade fiction book.

Pax has lived with Peter since he was six weeks old. “Pax” means peace but for this little red fox there is not much peace in his life when a human war is on the horizon. With the war imminent many towns are being evacuated before the soldiers arrive and unfortunately that means that many pets are being left behind to fend for themselves. Pax isn’t left behind but, at the insistence of Peter’s father, is released back into the wild.

It’s not just Pax that is abandoned though; Peter is also shipped off to live with his grandfather while his father answers his call of “duty”. Peter knows that leaving Pax was a bad idea and the first night at his grandfather’s he sneaks out to go and find Pax. It’s a three hundred mile trek but Peter is determined to be reunited with his beloved Pax.

While Pax is waiting, knowing that his boy will come back for him, and Peter is making his way back to Pax they each have their own (mis)adventures and they each learn that trusting others is sometimes the only way to survive. 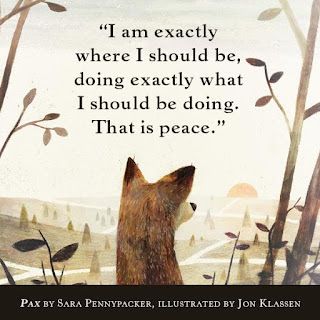 This book is so well written. The chapters alternate between Peter’s journey and Pax’s experiences (easily recognizable for younger readers as each chapter has a silhouette of the narrator at the beginning). While the author does not anthropomorphize Pax – she does give him a “voice” – allowing the reader to understand Pax’s feelings and emotions through true-to-nature fox actions. While reading the book the love and connection between Peter and Pax is palpable which means there were a few pages read with misty eyes. Ms. Pennypacker expertly writes the two adventures, mirroring each other in many ways, so that the reader cheers for both Pax and Peter to be reunited and yet leaving just enough angst to make that same reader wonder what will happen if they do find each other. Are they both too changed to be together again?

About a dozen illustrations are interspersed through the narrative. They are detailed black and white sketches, some full-page and others smaller images between paragraphs. They are never intrusive and I felt they added emotion to the story.

Although I do not do it often it is not unheard of me to pick up middle-grade fiction. Yes, the writing is often simple since it is aimed at a younger audience, but that does not mean the story itself is simple. In fact, while enjoying this story it often struck me that some of the situations seemed too intense for “middle-grade” readers. Perhaps I’m not giving the potential audience enough credit?

Bottom line? This is a book that adults can enjoy as much as its intended younger audience and I think it would be a great book to read with your child. While there is nothing in this book that would not appeal to girls at the same time I feel it was written geared towards a young male audience. 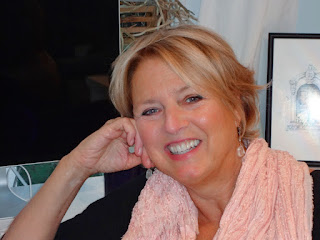 I loved books and I loved art - books and art didn't care that I was really tall or really shy. So I drew and painted and did mosaics and carved things (for a couple of years, I spent my whole allowance on bars of Ivory soap - great for carving!) and I read and made up stories.

Even today, I am happiest reading, writing, or making art.

These days, I split my time between Florida and Massachusetts, where I feel lucky to be able to write every day. I enjoy other things as well, like: bird-watching, raising orchids, bothering my kids even though they are grown-ups now, and ... pie.

I am the author of seventeen children's books, including the New York Times best-selling Clementine series; Summer of the Gypsy Moths; Pierre in Love; Sparrow Girl; and The Amazing World of Stuart. I have also contributed four books to the venerable Flat Stanley series.

My books have won numerous awards, including a Golden Kite Award and a Christopher’s Medal, many children’s choice state awards, and have appeared on many 'Best Books' lists.

ABOUT THE ILLUSTRATOR (from the book jacket) 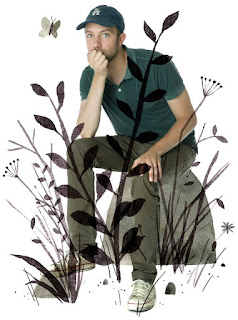 Jon Klassen grew up in Niagara Falls, Canada, and now lives in Los Angeles, California. He is a New York Times bestselling author and illustrator of several books, including “I Want Mt hat Back” for which he won the Caldecott Medal.
Posted by Unknown at 2/14/2016