I Feel Righteously Pissed Off!

THE BABY by Sylvia Norman

Those of you who have read my reviews know I don’t often write scathing, negative reviews so be warned – this is my version of a “scathing, negative review”.  This review might make you wonder if I don’t have a split personality.  And, I’m going to do things a little out of my usual order.  I want to say something positive (before I get into my rant) so I’ll start with the basics.

The premise of this book had a lot of promise towards being a really good horror story.  I understand that this was a “novelette”; by its very description, short by design, but the parts of the story that were to be the horror element had little to no suspense leading up to them.  They sort of struck you in the face … and rather than be shocking they just left me feeling rather flat.  A little bit of lead-in and emotion goes a long way into making a scene terrifying.  The writing was passable for, what I understand, is a first effort by Ms. Norman.  A good editor would have been able to pare down a sentence such as “As I got closer to the lady, I looked over her shoulder and saw she was holding a bloody baby that was bleeding profusely.”

Despite all that I was quite prepared to give this book a 2 ½ to 3-star rating because of Ms. Norman’s premise and her effort, which I still think are pretty strong.

I’m so pissed off I don’t even know because I cannot avoid my personal feelings getting in the way of an honest rating based on the book itself.  The last time I had such a strong negative reaction to a piece of creative endeavor was at a modern art exhibit when I came across a snow shovel hanging on a wall with a title card next to it reading: "Prelude To A Broken Arm".  The shovel still had a home hardware price sticker on it.  I think I started to hyperventilate.
From the book description:

“Patricia and William can’t wait to have children, but as soon as she gives birth, things seem to change.  First, although she doesn’t remember it, Patricia apparently tried to commit suicide in the hospital room.  The doctors write it off as postpartum depression, but Patricia has the oddest feeling her baby, Bernard, had something to do with it.

William tries to be supportive of his recovering wife.  He is careful and loving with their son, but she seems almost afraid of little Bernard.  She doesn’t treat him as a mother would – with love, compassion, and patience.  To Patricia, Bernard is some kind of monster, and sometimes, she swears he looks like an old man … and talks like one too.

Is Bernard the evil creature she suspects, or is the horror just part of Patricia’s twisted imagination.  William fears for his family, but he’s not sure where to turn.  He hates to think his wife is mad, yet her behavior gives him little choice.  Patricia, however, feels she has a purpose; destroy the child she brought into the world before
he hurts others, William included.”

Then there’s the book cover … looks pretty creepy too... black and white, single doll in a peeling, possibly bloody crib.  Just the kind of book I would be drawn to. 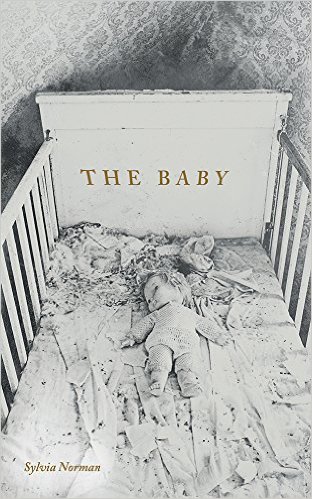 In "The Baby" there comes a definite point in the story where the reader thinks they are going to find out if Patricia is insane or if Bernard truly is evil and that’s where it totally went off the rails for me.

And just so you know I am NOT including any spoiler alerts here because I do not think the story deserves the courtesy … readers need to know what they are getting into.

The story makes a 180-degree turn and the reader finds out that early in her marriage Patricia made the choice to terminate a pregnancy.  Whether it was her guilty conscience or whether that baby was truly back to haunt her is neither here nor there in my opinion … the author’s views on the subject are made very clear in her dialogue and descriptions.  There was no warning anywhere on the book that this was going to preach a “Right to Life” point of view in such graphic terms.  If at some point I had had to make such a decision and then found myself reading this book … with NO WARNING … I would have thrown-up at the very least or been tempted to throw myself in front of a bus just because of the thick layer of guilt Ms. Norman lays on the reader.  If some poor woman had recently had to make such an agonizing decision (and YES I do believe, for most, it is a decision not made lightly) she would probably not pick up a book about evil babies … but we’re all readers here, used to suspending reality … if she did pick up this book IT WOULD BE DEVASTATING!

My personal thoughts on lifestyle issues do not matter here; I am not trying to start a debate and, I like to think I am not an overly sensitive reader but I do feel I have the right to full disclosure about certain aspects and subject matter of the book.  Most books give you an idea … “Christian fiction”, “LGBT fiction”, “Erotica” even a little “This book may contain…” or “This book may be offensive if …” – just give me the choice to pick it up or not!

Readers, especially those willing to try Indie authors and/or plug their way through self published work are often not sure where a story is going to lead (and may I say are often pleasantly surprised) … but if there is going to be some (a lot) of personal preaching done by the author in the guise of a story line … let me know ahead of time. 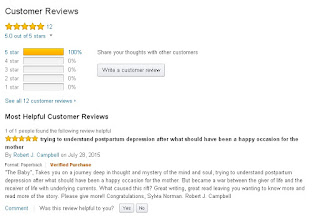 This novelette received nothing but five-star ratings and gushing, glowing reviews on Amazon.  On Goodreads.com it has two five-star reviews and one two-star review.  Am I (self deleted cuss word) missing some element of this book?  Somehow, I suspect there will be no requests forthcoming to post my review on either site.

*I received this book at no charge from the author
via Wordslinger in exchange for an honest review.”

ABOUT THE AUTHOR (from an insert included with the book)

“I was born in Atlanta, Georgia.  I reside in Lithonia, Georgia with my two sons.  “The Baby” is my first publication.  I am a horror and suspense fan.  My style of writing as the feel of the Twilight Zone, Night Gallery and the movie 1408.  I’m working on part two of “The Baby” and a new novel, “Family Portrait.”
Posted by Unknown at 9/18/2015

Email ThisBlogThis!Share to TwitterShare to FacebookShare to Pinterest
Labels: Book Reviews 2015, From the Author, WordSlinger