A Turkish Horror Film, The Danish Girl and Culling Books ...

… those are the reasons I am sooooo behind in writing and posting reviews.  I feel bad about that, but I console myself with the thought that my “week or so” has been productive in other areas.

It is Toronto International Film Festival time so my focus has been and is currently on movies instead of books.  I have an excellent source for tickets … I’ve finally forgiven my daughter for leaving her job at the bookstore … so spent the past weekend seeing some pre-release movies and will repeat the process next weekend as well.  Sadly, we couldn’t fit any red carpet events into our schedules this time around. 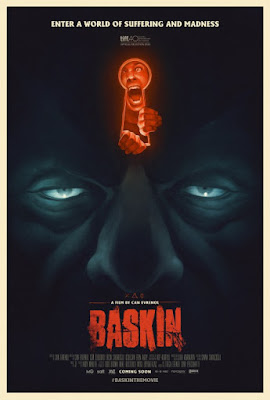 This past weekend's highlights were a Turkish horror film called “BASKIN”.  Five police officers are called to an abandoned house on a suspicious call.  Little do they know that they are about to enter through a portal to hell … and hellish it was.  Definitely not for the squeamish.  I was a little apprehensive about this one because it was described as being "cringe-worthy for even the most seasoned horror fans" and it was in the original Turkish with English subtitles.  Was it the best horror movie I have ever seen?  No, probably not, but still definitely worth a look-see if you are a fan of the genre.  Despite the fact that I left shaking my head about some parts the “cringe-worthy” description was dead-on.  I looked around, during those times I couldn't bear to look at the screen, and I was NOT the only person watching parts of this movie through my fingers. The character of “Father” was played by Mehmet Cerrahoglu who in real life is a parking lot attendant chosen for this role because of his rather unusual looks. (See, I do pay attention during the Q&A's)

"Father" or "Dada" is one of the creepiest and most unique characters I have seen in a film in some time.  Personal thought ... someone in Hollywood should sign up Mr. Cerrahoglu because he is interestingly unique and did a superb job in this film.  Hard to believe it was his first time on film.

Director Can Evrenol did a Q&A after the film.  Considering his self-admitted micro, micro budget this was well-done film and I think Mr. Evrenol could be an "up and comer" filmmaker.  In consideration of more delicate constitutions I won’t embed it here but if you are a horror fan and want to check out the trailer it can be found HERE. 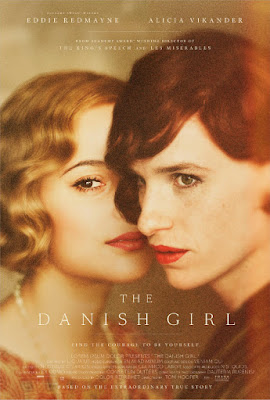 The other film was "THE DANISH GIRL" starring Eddie Redmayne.  He is superb in the film and it would not surprise me if he received another Oscar nod for his portrayal of Lili Elbe (aka Einar Wegener) one of the first recipients of gender reassignment surgery in 1930.  It’s a hot topic these days with Caitlin Jenner being all over the tabloids but this movie shines a different light on a very sensitive subject and depicts a heartrending portrayal of unconditional love.  The film is based on David Ebershoff's book of the same name.  There is also a biography titled "MAN TO WOMAN" which includes letters, Lili's diary entries and a conversation between Lili and the editor, Niels Hoyer.  As is often, dare I say always, the case with books made into movies some parts are left out for the sake of the cinematic story.  After seeing the film I checked out a few more facts on line and that just led me to want to read both the Ebershoff book and the Hoyer book (if I can find a copy ... haven't checked that far into it yet).  In addition to the wonderful story and outstanding acting the film was a pleasure visually as well.

This was a good one in all respects.

The film was also followed by a Q&A with director Tom Hopper (The King’s Speech, Les Miserables).

I also did some much needed “culling” of my bookshelves.  I need incentive to do that because it’s very difficult for me to get rid of books.  I purged 127 books off my shelves and (sigh) it didn’t even seem to make a dent.  There is a huge “used book sale” happening at the end of October in support of the local library in the city I work in (not the same city I live in) which I want to attend.  They are currently taking donations so some of the older books and paperbacks went into that box.

The books were picked up on Friday and I feel good knowing they are potentially going to be enjoyed by other readers.  On the flip side of that deal … I know that I am going to be attending the sale so, no doubt, some of that cleared space will be refilled.  Oh well!  All for a good cause as long as I don't end up buying back some of my donated books.

Some of the others I took pictures of and offered “grab bags” to the “Free Little Libraries” organization in the city where I live.  I posted them on their website and within 15 minutes I had more than enough messages from people willing to pick them up.  I also have a list of names to contact when I do round 2 of the “culling”.  I just couldn’t be ruthless enough to pull all the books that should be pulled in one fell swoop.  I feel like I achieved an even split of the two cities so I feel good about that. 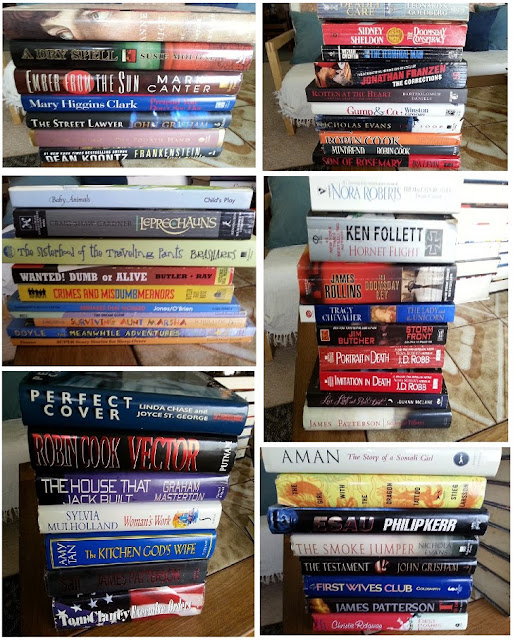 So that’s what I’ve been up to instead of writing reviews.  I hope to get caught up this week.
Posted by Unknown at 9/14/2015