Outside the Magic Circle - A Review

CATHERINE DICKENS: OUTSIDE THE MAGIC CIRCLE by Heera Datta. 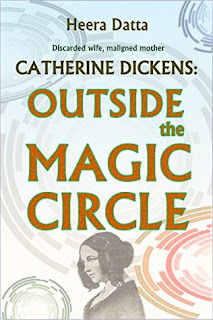 Catherine and Charles were married for 21 years and during that time they had 10 children, he became quite successful and she enjoyed looking after home and hearth.  They seemed the perfect couple, happy, affluent, social – then, almost in a blink of an eye, he moved out of their shared bedroom, very publicly announced that she was an uninterested wife and unfit mother and consequently they were separating.

While Charles Dickens aired his grievances and separation in the public forum, which as a famous and popular author at the time, he almost owned Catherine was relegated to a small home and bound by legalities to not utter a single word against Charles.  Her voice was literally cut off if she ever wanted any hope of seeing her children again.  In this book Ms. Datta finally gives Catherine her voice and a platform to tell her side of the story.

Catherine tells the reader of her and Charles’ love story when they were courting, the lengthy letters they exchanged when they were apart and the life they shared as their family and circumstance increased.  She tells us of her surprise and shock when Charles literally cast her aside (in favor of a younger woman) and her embarrassment at his making it such a public spectacle.  The reader grieves with Catherine as she is forcibly kept apart from her children and at the hurt she experiences when her own sister sides with Charles.

Although the information about Catherine and Charles’ life and separation is historical fact, since Catherine never spoke publicly the recollections, conversations with friends and private feelings all come from Ms. Datta’s imagination and very skillful story telling skills.  There was never a moment, while reading this book of historical fiction, in which I had any doubts that this was exactly what Catherine must have been feeling.  It is exactly what I would have been feeling.

Not only does Ms. Datta give Catherine a beautiful voice but also she makes her very real to the reader and, she gives her reader a very well written, well researched account of what life was like in the late 19th century for women.  They were most certainly considered the chattel of their husbands and/or fathers with no rights when it came to money, custody of their children, maintaining their homes or any other details of every day life.

While reading this book I alternated between being very angry and very, very sad – a testament to Ms. Datta’s skills to be able to provoke those emotions.  The book ends (no spoiler alert necessary here) with Catherine finally getting her side of the story out to public when with, quite literally, her dying breath she requested her personal letters from Charles Dickens be donated to the British Museum so “that the world may know he loved me once”.

This is a well written book and I would recommend this book to fans of historical fiction, the Dicken’s era or anyone interested in Charles and Catherine Dickens.  Well-done Ms. Batta!

* I received this book at no charge from the author in exchange for an honest review*
I also apologize to Ms. Datta for taking so long to read and review this book.  I am certainly sorry it took me so long to get to it … it was truly a wonderful story.

ABOUT THE AUTHOR (from the book)

Heera Datta is a writer of Middle Grade fiction.  She is interested in reading books of different genres, including biographies and historical fiction.

Email ThisBlogThis!Share to TwitterShare to FacebookShare to Pinterest
Labels: Book Reviews 2015, From the Author