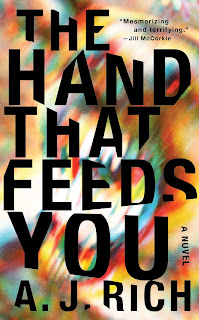 THE HAND THAT FEEDS YOU by A.J. Rich.

** I received this in a Goodreads “First Reads” giveaway (courtesy of Simon & Schuster Canada) in exchange for an honest review. **

Morgan Prager is pretty content with her life.  She has almost completed her thesis on victim psychology, she has just gotten engaged to very sexy and handsome Bennett and she does volunteer work with a local dog rescue.  That all changes one evening as she walks through her front door and finds her fiancée has apparently been mauled to death by her three dogs; a Great Pyrenees and two Pit Bulls.  Definitely strong enough to have committed the horrific act Morgan still has trouble believing what has happened.

Bennett was always quite secretive about his life, but consumed by guilt over what her dogs had done, she feels it is up to her to find Bennett’s parents and tell them about the death of their son.  That’s when things begin to go a little off kilter.  Morgan can find no trace of his family, no trace of his company and nor any coworkers or friends.  In fact she is beginning to suspect that Bennett might not have been his real name.  Who was this stranger she had been ready to marry and what really happened on that strange night?

When Morgan learns that Bennett also had an ex-wife, an ex-fiancée and another current fiancée she begins to fear that she, herself, has become one of the victims she has been studying for so long.  When these women from Bennett’s life begin to turn up dead as well, she begins to fear for her own life.

This book is a psychological thriller, as advertised.  However, where I would usually expect a psychological thriller to be a page-turner, I found this one to be rather slow moving.  I understand that a large part of the story centered on Morgan feeling as much a victim as those she studies for her thesis, too much time was spent on that aspect of the story.  While it was interesting, I felt it slowed the book down and was quite honestly, not necessary.  The story would have moved along just as well had she been a secretary or a teacher.  With that personal criticism out of the way, I can still honestly say that it was a good read.  It has its gory moments, its frightening moments and definitely some suspense.  The story idea is fresh … can’t say I’ve read another murder mystery where dogs were the prime suspects.  The characters themselves were a take them or leave them bunch, with only the animal rights lawyer being top of my list as a favorite.

I did have the bad guy figured out quite a bit before the final action took place, but that’s okay and maybe on purpose.  It was fun to know before Morgan figured it out … made it somehow more suspenseful as a reader.

Overall … I would not feel bad recommending this to murder mystery fans, but maybe not quite go as far as to call it a hardcore thriller.

I did particularly like the last line in the book; referring to a normally good natured dog that might become vicious when it’s frightened, being threatened or abused.

“ ‘Turns out she’s the sweetest thing.  She protects the smaller dogs here, and I trust her with all of them,’ Alfredo said.  ‘There’s a term you’ve heard?  The blossom?  A dog finds herself out of a bad situation and can trust that she is safe?’

ABOUT THE AUTHOR(s) (from Goodreads)

A.J. Rich is a pen name for the collaboration of Amy Hempel and Jill Ciment. 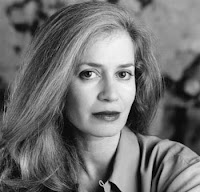 Amy Hempel is an American short story writer, journalist, and university professor at Brooklyn College. Hempel was a former student of Gordon Lish, who eventually helped her publish her first collection of short stories. Hempel has been published in Harper's, Vanity Fair, GQ, and Bomb. She is the recipient of a Guggenheim Fellowship, as well as the Ambassador Book Award in 2007, the Rea Award for the Short Story in 2008, and the Pen/Malamud Award for short fiction in 2009.

Jill Ciment was born in Montreal, Canada. She is the author of Small Claims, a collection of short stories and novellas; The Law of Falling Bodies, Teeth of the Dog, The Tattoo Artist, and Heroic Measures, novels; and Half a Life, a memoir. She has been awarded a National Endowment for the Arts, a NEA Japan Fellowship Prize, two New York State Fellowships for the Arts, the Janet Heidinger Kafka Prize, and a Guggenheim Fellowship. Ciment is a professor at the University of Florida. She lives with her husband, Arnold Mesches, in Gainesville, Florida and Brooklyn, New York.


The Mountain Story by Lori Lansens. 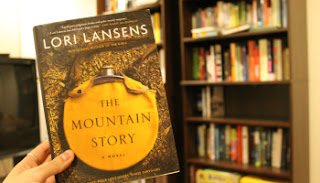 “Dear Daniel, A person has to have lived a little to appreciate a survival story.  That’s what I’ve always said, and I promised that when you were old enough, I’d tell you mine.”

So begins the letter from a father to his son telling the story of Wolf Truly’s life and the five unforgettable days and nights he spent on the (always unnamed) Mountain.

Life had never been kind to Wolf and when it became more cruel than he thought he could bear Wolf intended to climb to Angel’s Peak at the top of the Mountain and jump.  It was the day of his eighteenth birthday.  Not planning on returning from his excursion he left his backpack at home leaving him with no food or water.  Almost as equally unprepared were Nola, Bridget and Vonn, the Devine women – mother, daughter and granddaughter – one with a mission, one with a grudge and one with a secret.  When the paths of these four people cross it begins an unfortunate series of missteps.  They find themselves stranded – their only hope of making it off the Mountain alive being their wits and each other.

This story is the ultimate “you can’t get there from here”.  Wolf and the ladies can always see the lights of the city below and even the local trailer park named “Tin Town” and they look so close, so achievable and so inviting.  Unfortunately, looks can be deceiving and not only when speaking of landscapes.  The book cover states, “The trial they undergo together is thrilling and heartbreaking, funny and nail-biting and profound.”  No false advertising there.  It certainly is all those things.

Lori Lansens has been on my “must read author” list since Rush Home Road.  Her books have never disappointed me and that carries on with “A Mountain Story”.  She gives me characters whose lives are far from perfect, who question themselves and their motivations … who often stop and ask “why me?” … then they persevere placing one foot in front of the other, like we all have to do in real life.  Ms. Lansens’ writing takes the readers on every painful step right along side of the characters from the gut-wrenching ride on the tram to get partially up the mountain through to the cold, hard rocks, and the hunger and thirst being endured to try and get back down.

About the Author (from the book cover)

Lori Lansens was a successful screenwriter before she burst onto the literary scene in 2002 with her first novel, Rush Home Road.  Translated into thirteen languages and published in fifteen territories, her debut received rave reviews around the world.  Her follow up novel, The Girls, was also an international success.  Her most recent book is The Wife’s tale, which was another national bestseller.

Born and raised in Chatham, Ontario, after living in downtown Toronto most of her adult life, she moved with her family to the Santa Monica mountains near Los Angeles in 2006. There she shares her backyard with bobcats, rattlesnakes, mountain lions and coyotes. The Mountain Story, her latest novel, was inspired by her respect and appreciation for the wild.
Posted by Unknown at 6/11/2015