Does This Make Me a Crazy Book Lady?

Have you ever purchased a book that you have absolutely NO intention of reading?

I don’t mean a reference book that you refer to from time to time, or that gorgeous coffee table book that you glance through for the beautiful pictures, or a dictionary and thesaurus set because no bookshelf would be complete with them.  I mean a book that struck your fancy for one reason or another, that you had to buy, despite the fact that you ABSOLUTELY KNOW you will NEVER READ! 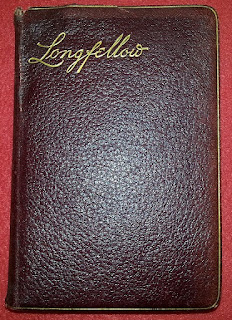 Honestly, I just couldn’t help myself.  I even tried to walk away.  I left the store.  I got in my car and drove home.   I kept thinking about that little book.  The next day I went back to the store and bought it.

It’s been sitting on my shelf ever since … occasionally touched … never read.

Am I crazy?  Maybe just a little bit.

The book I’m talking about is a little treasure I came across while I was nosing around in an antique shop.  It caught my eye because it was a leather-bound volume of Longfellow poetry.  It looked like it had been well loved by its previous owner, but still in decent condition.  The title of the little book is

Not being “into” poetry I knew very little about Henry Wadsworth
Longfellow.  I had no idea his collected works were so prolific

The first chapter is entitled “EARLY POEMS” (Written for the most part during my college life, and all of them before the age of nineteen).  The next chapter is entitled “BALLADS” with a lengthy “Prefatory Note” beginning with the words “The following Ballad was suggested to me while riding on the seashore at Newport.”  And, on it goes through the book, with a personal note under each chapter heading.  Was this self-published work?  I had no way to tell. 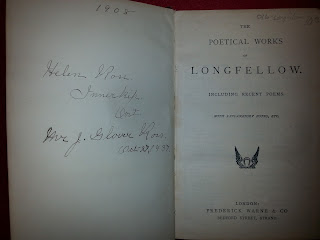 I still can't explain why but I picked it up and began to thumb through the pages.  The first thing I noticed was that it had been inscribed with dates and two names on the first flyleaf.  Although the book itself does not contain a publication date or any copyright information that I could find, I know it belonged to Helen Ross of Innerkip, Ontario and Mr. J. Glover Ross.  Two dates are visible; the year 1908 and October 27, 1937.  Anniversary perhaps?  A book of poetry would make a lovely anniversary gift for a fan of poetry in general, or Mr. Longfellow specifically.

I loved that the handwriting of the signatures looked “old fashioned”.  They look like they may have been penned by the same hand.  Did someone else inscribe the books?  What did those dates really signify?  Mystery!  Mystery!  Mystery! 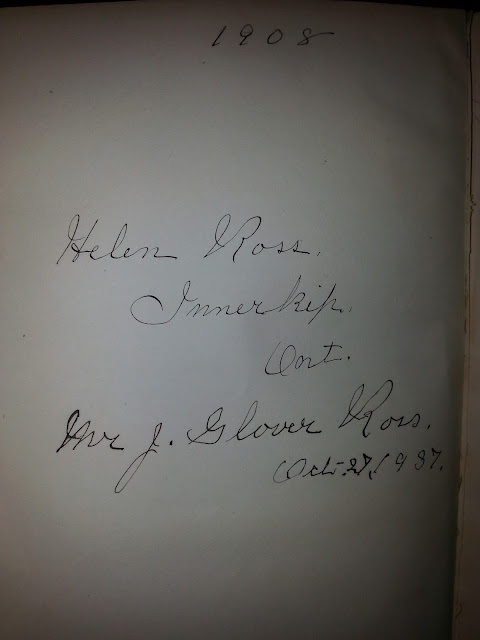 I carefully paged through the book some more and saw that the text was quite small, the pages were not quite onionskin paper but quite delicate (by today's standards) and the headings and poem titles were printed in an almost Gothic text.  The front page informed me that it was printed in London by Frederick Warne & Co, Bedford Street, Strand.  Despite the fact that Helen Ross lived in Innerkip I made the assumption that the book was published in London, England and not London, Ontario.  The type was set by Morrison and Gibb Limited, Edinburgh. 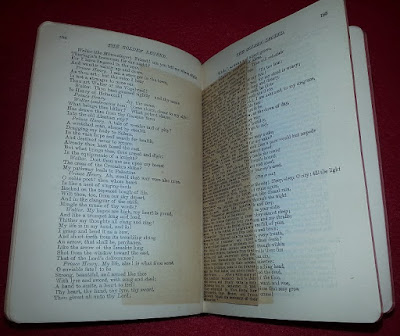 As I continued perusing I came across a newspaper clipping carefully inserted in to the book between pages 194 and 195.  I knew it had been there a long time because the pages were discolored where the clipping had lain for all those years.  It was indeed a real newspaper clipping and not a photocopy.  The clipping?  The story of how Mr. Longfellow may have gotten his idea for "Evangeline", "the greatest of all his works" from Nathaniel Hawthorne's "American Note-Books".  The story of a young couple separated on their wedding day and carried in different directions during conflict in Acadie, Nova Scotia in 1775.  They lost all trace of each other.  "The poem describes the wanderings of the bride in search of her lover, and her final discovery of him as an old man on his death-bed, in a public hospital which she had entered as a nurse".

Now I was in love! 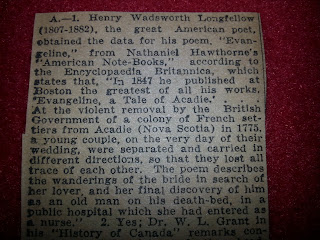 It would have made sense if the clipping had been places between the pages of "Evangeline", but that clipping was inserted in the midst of the poem titled, “The Golden Legend”.

Was the article placed purposely between these pages?

If Mrs. Ross obtained the book in 1908, where did the article come from?

Had she cut it out felt it was appropriate to place it in the book?  I wish there was a date on the article!

Was the story somehow related to Helen and Glover Ross?

Did the poem remind them of a love story?  Their own?

Had someone else owned the book before Mrs. Ross?

Was this just a bit of information someone wanted to recall so placed it in the book?

Am I making too much of a random act performed in the early 1900's?

There is probably some mundane explanation to all of it.  The pages of books may be able to speak but this one is keeping hold of its secrets.

I may never read this book from front to back but every once in a while I pull it off the shelf (usually when I’m dusting) and run my fingers over the cover.  And, I keep wondering …
Posted by Unknown at 6/11/2015