Fascinating Despite the Cringe Factor

DR. MUTTER’S MARVELS (A True Tale of Intrigue and Innovation at the Dawn of Modern Medicine) by Cristin O’Keefe Aptowicz.

Thomas Dent Mutter was born to a fairly affluent family but illness and death left him an orphan with limited means.  An uncle agreed to become his guardian and although not emotionally supportive he did ensure that young Thomas received a good education.  Thomas’ creativity showed early when he learned to indulge his love of quality (and somewhat flamboyant) clothing.

“Over the years, he grew practiced in the art of finessing opportunities so that he could live something approximate to the life he desired.  At boarding school, he was known to charge his clothing bills to the institution and then earn scholarships to pay off the resulting debts.  When he wanted to travel, he secured just enough money to get him to his destination and then relied on his wits to get him back home.” 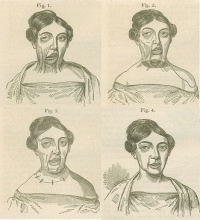 This creativity served him well after he graduated from medical school and wanted to go to Paris, the epicentre of medical achievement at the time.  Mutter was always fascinated by and drawn to surgery.  He “loved the daringness of the surgeries attempted during this time”.  Aside from the procedures themselves he enjoyed the fact that surgeons did not depend on class and family to acquire patients and, thereby, success … “surgeons earned their place through hard work, study and skill”.  He knew surgery was his calling and in Paris Dr. Mutter was inspired by some of the best. 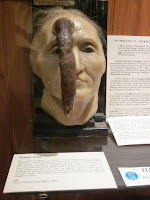 He returned to American with not only the knowledge of the new “les operations plastiques” but a wax sculpture of a woman with a horn growing out of her forehead (which was subsequently surgically removed).   Thus began his collection of “marvels” and also his lifelong determination to help the “monsters”, those people whose deformities made their lives unbearable.  His abilities were awe-inspiring, especially in the early 19th century when aesthetic was not available.  Doctors were often favoured as much because of their speed with the scalpel as for their medical prowess.

Mutters hands were his most valuable asset,

"Swift and nimble, quick and precise, they were one of the reasons he was able to do the work he did.  It was rare blessing enough to be ambidextrous.  But to be skilled as Mutter was with both his hand was seen as near miraculous (Few can boast of [being ambidextrous] … and often, many who can have in fact only two left hands’” a fellow doctor once quipped)".

Being presented the position of Chair of Surgery at Philadelphia newest and soon most prestigious Jefferson College of Medicine Dr. Mutter was instrumental in so many medical innovations and influencing more than a few students who went on to become the leaders of the future medical community.

This book was an astounding recounting of this man’s remarkable life and achievements.  It is written in a conversational style and smoothly incorporates the politics, the medical practices and social beliefs of the time.  Ms. Aptowicz does a remarkable job.  I have no practical knowledge of medicine or surgical practices, and very little about Philadelphia during the late 1800’s yet I found this book easy to read and understand.  There is no other way to describe it other than utterly fascinating.  I believe it would appeal equally to fans of non-fiction historical accounts and those who may not read a lot of non-fiction but enjoy a fascinating story.  I find myself wondering why Dr. Mutter’s story is not more well-known?  Definitely five stars.

On a personal note:

There are some spine tingling surgical descriptions in this book and more than anything it makes me so grateful to Dr. Mutter, his contemporaries and students who persevered so I now live in a time when we have anaesthesia, antiseptics, painkillers and doctors who wash their hands.

The museum does have website to visit at www.Muttermuseum.org

ABOUT THE AUTHOR  (from the book jacket) 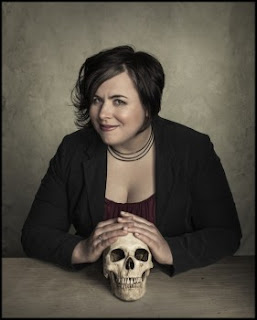 Cristin O’Keefe Aptowicz was born and raised in Philadelphia and first visited the Mutter Museum during a class trip in the fourth grade.  A decade and a half later, her feature-length biographical screenplay, “Mutter”, won screenwriting awards at the Hampton’s International Film Festival and the Philadelphia Film Festival and earned her a fellowship from the Alfred P. Sloan Foundation, directly inspiring her to research and write this book.

She is the author of six books of poetry as well as the non-fiction book “Words in Your Face: A Guided Tour through Twenty Years of the New York City Poetry Slam”.  Her recent awards include a National Endowment for the Arts Literature Fellowship, the ArtsEdge Writer-in-Residency at the University of Pennsylvania, and the Amy Clampitt Residency.

She lives in Austin, Texas.

As I was reading this book I couldn’t help but be reminded of a television series I started watching (and loved).  Unfortunately I didn’t catch the whole season, but reading this I began to wonder if “The Knick” was loosely based on this book or on Dr. Mutter’s story.  When I was looking for pictures for this blog post I found that I was not the only one who saw the similarities. 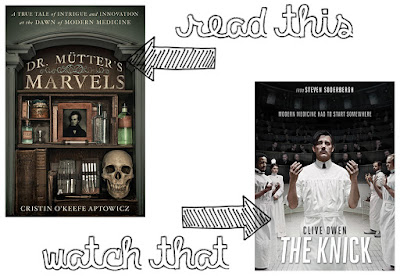