Eighty Eight Years - The Long Death of Slavery - A Review 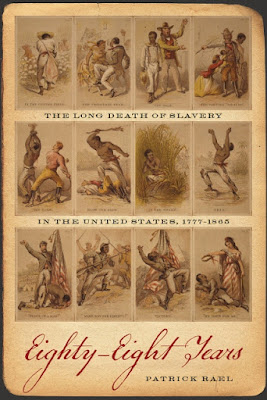 The subtitle of this book is “The Long Death of Slavery in the United States, 1777 – 1865” and in all honesty that is a bit misleading.  Although the book's main focus is on those years, when I read the prologue, “A House Divided”, I soon realized it touches on a much longer time period.  At 26 pages it is quite a lengthy introduction but I highly recommend you DO NOT skip the reading.  In fact the whole book packs quite a wallop – coming in at just shy of a page count of 400 – the information Mr. Rael manages to incorporate is commendable – DO NOT skim over any of the pages.

Before Mr. Rael even begins on the history of slavery in the United States he gives his reader some excellent background of slavery in various societies, countries and eras.  He explains how and why it was deemed “acceptable” to treat other human beings simply as “chattel to be bought and sold in the marketplace”.

Following his interesting and (for me) illuminating introduction the book is clearly divided into four sections:

THE AGE OF REVOLUTION and THE EARLY REPUBLIC are the two sections where Mr. Rael explores the historical precedents to slavery, the reasons slavery was embraced and enforced and the history of the revolutions leading to abolition in different parts of the world.  As slavery was first embraced in various countries and then subsequently abolished, why was America the last country to come to terms with abolishing slavery?  What were the social, political, religious and social ramifications of freeing those people so many considered property?

“Writing of the slaves to early British abolitionist Granville Sharp, (Anthony) Benezet asked, “Did not he that made them make us, and did not One fashion us before we were born?”

In THE AGE OF IMMEDIATIONISM Mr. Rael explores how politics and the antebellum south slowed the resistance to slavery in the United States.  How owning slaves empowered the southern plantation owners not only economically but politically as well.  Most interestingly, he also delves into how the enslaved African-Americans began to revolt, sometimes through legal means and sometimes through violence, against their own oppression.

“In indirect but crucial ways, then, African Americans deeply shaped the breakdown of the party system and its reformulation around the slavery issue.”

The title of the last section of this book is self explanatory, THE CIVIL WAR AND RECONSTRUCTION.  Mr. Rael takes a looks at the ramifications of the free north versus the slave holding south.  Neither side wanted to budge in their beliefs and there was no choice but to fight for a truly “united” United States.  The Civil War started as a conflict about succession rather than slavery, but as the battles got bloodier and the toll on human life became out of control, slaves were conscripted.  Once they agreed to fight for not only their own emancipation but for their country how could giving them freedom not be considered?

“Only military desperation had driven the Union to abolish slavery.”

In the last pages of this section the author moves forward (rather quickly) to the fallout of abolitionism including touching on subjects such as the now “free” black population being given the right to vote, have religious freedom and the ability to receive an education.

“Governor Michael Hahn, suggesting the possibility of granting the right to vote to African Americans.  ‘I barely suggest for your private consideration, whether some of the colored people might not be let in – as, for instance, the very intelligent and especially those who have fought gallantly in our ranks.”

He goes on to explore the beginnings of the Ku Klux Klan, segregation and “the national acquiescence to the grave injustices of the Jim Crow era.”

“No African American could have missed the point.  The war for the union may have been over, but the one for equality had just begun.”

This book definitely deserves a FIVE STAR rating but before I get into why I feel it deserves that rating and onto my personal impressions of the book I think I need to put my choice of this book into a little perspective.  Let’s face it, if you have a look at my normal reading preferences this is not the type of book I usually pick up for some relaxing reading on any given evening.  So why?  In my life is a fellow book lover, so by default, someone I frequently discuss books with, who for various reasons has became very interested in this topic and how it leads to current civil rights and injustices.  When there is someone with whom you discuss books it is very nice to understand a little bit of what they are talking about.  When it came to this particular topic I frequently had to plead ignorance.  My knowledge of slavery issues begins and ends with reading “Mandingo”, learning about Canada’s role in the “Underground Railway” and watching “Roots”.  I wanted to rectify that but not at the expense of the amount of my time it would take to read dozens (if not hundreds) of books on the subject.  Quite frankly, I needed a “Cliff’s Notes” version.  I by no means have the intention of negating or insulting Mr. Rael’s book with that comparison (it, honestly, should be taken as a compliment), the term merely simplifies what I was looking for – a clear, concise book on that period of U.S. history.  Eighty-Eight Years absolutely fit the bill.  For someone like myself this book was absolutely full of the type of information I was looking for in that condensed, readable, highly understandable and well laid out format.

I greatly appreciated that Mr. Rael followed a chronological time-line.  He included what was happening in other countries at the same time to put things into very clear prospective for his reader.  In a book of this type, by necessity, there are extensive footnotes for quotes and excerpts for other works.  To Mr. Rael’s credit I did not feel the need to flip back and forth between the text and the footnotes to understand a reference or clarify what I was reading … but they were there if I chose to do so.  My biggest apprehension when I requested this book for review was that I would be reading a textbook.  Admittedly, I found myself starting to jot down notes when I first started reading.  Thankfully, I could quickly put an end to that since I realized the things I had jotted down were quickly made clear as I continued reading.

“Now imagine another Virginia slave, on another summer night, some hundred miles to the south of the Richmond where Gabriel had launched his uprising thirty one years earlier.”

That was the first line of the third section.  Mr. Rael moved to a conversational tone to write about the more personal impact of slavery had at the time.  I appreciated that change.  As important as the dates and historical data were, this is point where I began to clearly understand and thoroughly enjoy learning about the people and the history.  That may not be a turning point for everyone reading this book, but it completely met my personal needs.

I’ve gone on long enough for a book review; so let me close by repeating that I found this to be an excellent concise and understandable version of this period of American history.  Eighty-Eight Years includes enough references and sources anyone looking for more information can use this book as a springboard to more in-depth works or be completely satisfied (as I am) at the end that they have educated themselves about this important part of history.

Mr. Rael sums it up best with his last line …

“As these pages detail, the long and complex history of total emancipation in the United States involved innumerable social and political actors.  Perhaps more than any other group, though, these neglected Americans may deserve credit for bringing slavery to its knees.”

This book releases on August 15, 2015.  For another excellent review of this book (from a different perspective) visit HERE.

On a personal note:
This book did peak my interest and I appreciated Mr. Rael’s writing style so I would be very interested if he decided to write a similar book about the next 90 years of the racial history.  Who would have imagined I could want a “sequel” to a history text?

ABOUT THE AUTHOR (found HERE) 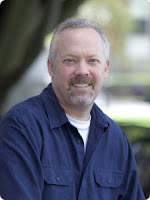 A professor of history at Bowdoin College, Patrick Rael is a specialist in African American history. He is the author of numerous essays and books, including Eighty-Eight Years: The Long Death of Slavery in the United States, 1777-1865 (2015) andBlack Identity and Black Protest in the Antebellum North (2002). He is the editor of African American Activism before the Civil War: The Freedom Struggle in the Antebellum North (2008) and a coeditor of Pamphlets of Protest: An Anthology of Early African-American Protest Literature (2001). He has also written extensively about teaching, has contributed to the development of African American history curricula, and for over a decade has led seminars and workshops on teaching American history in primary and secondary schools.
Posted by Unknown at 6/08/2015