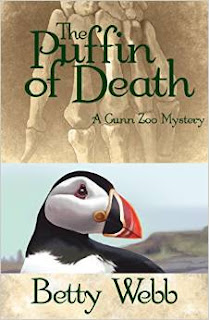 THE PUFFIN OF DEATH by Betty Webb.

Zookeeper Theodora (Teddy) Bentley finds herself, with very short notice, on a plane traveling to Iceland.  The eccentric owner of the Gunn Zoo, who also happens to be Teddy’s aunt, has asked her to go and pick up a baby polar bear named Magnus, two artic foxes and a pair of grounded Puffins for the Gunn Zoo’s new “Northern Climes” exhibit.  Although the trip was unexpected Teddy is looking forward to doing some sight-seeing in addition to her “zoo duties”, because really – how many times does one get to travel to Iceland with a platinum corporate credit card?

On her second day she and her Icelandic zoo counterpart, Bryndis, are out horseback riding when a strange lava formation catches Teddy’s eye.  Upon closer investigation it turns out not to be an unusual land mass but a dead body … shot twice and, unfortunately, a little worse for wear having been pecked at by the wild puffins that nest in the area.

Teddy does have a knack for finding dead bodies.

Despite being warned by both her fiancée (the local law back home) and Icelandic detective Thorvaald (Thor) Haraldsson she cannot help herself – she begins looking into the death herself.  She learns the victim is an American birdwatcher (who happens to be married to a successful novelist and has just won multi-millions in the lottery) on holiday in Iceland with his Arizona bird-watching group.  There are no shortage of suspects nor is Teddy’s discovery the last victim.

I have read and enjoyed all of Ms. Webb’s Gunn Zoo Mysteries so when I saw this new title I wanted to read it immediately.  The Icelandic setting makes “The Puffin of Death” a little different from the previous three books.  Ms. Webb enjoyed a trip to Iceland herself and made good use of her first hand knowledge of the country.  Her descriptions of the lifestyle, the people and their unusual names, the language and the landscape are wonderful.  Her well-researched information about Icelandic wildlife is fascinating.  Between that and the vivid geographic descriptions, I learned a lot about a place I will probably never get to visit myself.  That was enjoyable however, while Iceland was an excellent setting for this murder mystery, I did find myself missing the Gunn Zoo and all the quirky characters I have come to know over the course of the last three books.  I’m sure (fingers crossed) they will be back in the next installment to this series.

All in all a good read and completely the type of story I was looking for when I picked it up. 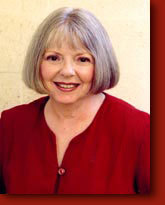 ABOUT THE AUTHOR (from Goodreads)

As a journalist and literary critic for more than 20 years, Betty – a resident of Scottsdale, Arizona, where her fictional detective Lena Jones also lives – has interviewed U. S. presidents, Nobel prize-winners, astronauts who’ve walked on the moon, polygamy runaways, the homeless, and the hopeless.

Now retired from journalism to write full time, she also contributes the Small Press column for Mystery Scene magazine and teaches creative writing at Phoenix College.
Posted by Unknown at 6/24/2015