Where Did I Come From?

Although I tend to steer away from Sci-fi and Western themed books I read a wide variety of genres.  Admittedly, the majority of the books I read and enjoy are works of fiction.  Its escapism at its best!  I can read the book, enjoy it and then pretty much put it out of my mind and go on to the next one.  Oh, if it was a great book parts of it stay with me, but unless it was part of an ongoing series I was reading, in a later conversation about said book the main character’s name would probably not come to me.  Every once in a while I pick up a non-fiction book, usually some sort of (auto) biography.

Quite some time ago I read a book titled “The Good Daughter” by Jasmin Darznik. 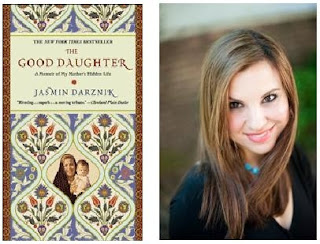 Jasmin’s story struck a chord in me and I find myself thinking back to this book every once in a while.  While I think the book is certainly worth reading, the official product description sums it up in a nutshell …


Jasmin Darznik came to America from Iran when she was only three years old, and she grew up knowing very little about her family's history. When she was in her early twenties, on a day shortly following her father's death, Jasmin was helping her mother move; a photograph fell from a stack of old letters. The girl pictured was her mother. She was wearing a wedding veil, and at her side stood a man whom Jasmin had never seen before.

At first, Jasmin's mother, Lili, refused to speak about the photograph, and Jasmin returned to her own home frustrated and confused. But a few months later, she received from her mother the first of ten cassette tapes that would bring to light the wrenching hidden story of her family's true origins in Iran: Lili's marriage at thirteen, her troubled history of abuse and neglect, and a daughter she was forced to abandon in order to escape that life. The final tape revealed that Jasmin's sister, Sara - The Good Daughter - was still living in Iran.

Her story is not necessarily original, similar stories have been told before, but she does tell it well.  When some little thing makes me recall this book it is not the story itself that worms its way into my thoughts … it’s the fact that Jasmin found out so very much about her heritage and her family.  Not just her genetic ancestry but how people were “feeling” and “living” at the time.  What this makes me realize, much to my regret, is that I know nothing about mine.

Oh, I know the birth countries of my grandparents and parents.  I know the bare bones of the circumstances that caused them to leave those countries.  I know where my parents met (though not how).  I know that we ended up in Canada (though not why), although I definitely consider it home.  I am uninformed.

I don’t dwell on it, but when I do think about it it’s rather sad.  Probably my fault for never asking questions or listening closely when it may have come up in reminiscent-type conversation with relatives (although I like to think I would have listened had it ever been discussed  … I’m pretty sure it never was).  I have no siblings so there is no one to compare notes with and, the one person left who could fill in some blanks no longer has the mental where-with-all to do so.  Ah, the evil of Alzheimer’s.

I don’t know what it says about me, but I am less intrigued about my father’s side of my heritage than I am about my mother’s background.

No, even writing that sentence I know it isn’t true.  I am less intrigued about her family … its my mother that intrigues me.  When I was growing up she would occasionally say things or make a comment that seemed a little out of character and it made me wonder where “that” came from.  Being brought up as a good little German girl, as a child it would never occur to me that it was my business to ask.  Then as a teenager, did I care to ask?  Or didn’t I dare to ask?  As a young adult I was busy living my own life, what with college and career on the horizon.  Of course life followed the usual course of events, and I got married and started a family of my own.  It is only now, as a woman with adult children that it seems to matter so much more.

That notorious party question comes to mind … if you could be stuck in an elevator with anyone past or present who would you choose?  For me it’s a no-brainer.  What I wouldn’t give for another 24 hours with my mother.  I would like that for oh so many reasons, but mostly, I would like to just get to know her a little better.  Not the sister-her, the wife-her or the mom-her, but the real her.  The woman.

The things that feed some of my curiosities:

My mother married my father when she was 30 years old.  Back then that was old, and I’m sure she was considered to be well into her spinsterhood.  Why so late in life?  By all accounts and from the pictures I have seen she was a very attractive young woman.  To give credit where credit is due, back in the day my father was no slouch in the looks department either … think Patrick Swayze/Dirty Dancing good looks. 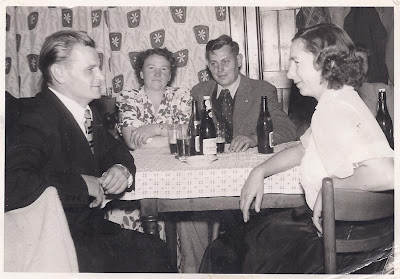 But I digress.  Granted, it could be argued there was a war going on, men were in short supply, her family had been forced off their land and relocated to another country.  The simple act of living was so time consuming who had time for little things like falling in love and getting married.  But the war ended when she was twenty years old.  Hmmm?

My mother married a man 7 years her junior.  That just barely skirts the “cougar rule” (as my daughter explained it to me once) of half your age plus seven.  Now my mother could hardly be described as a “cougar” but I’m fairly certain such an age difference (with, horrified gasp, the woman being older) was hardly the norm back in the 50’s.  And NO she did not have to get married!  I came merrily along three years later … I did the math …  it’s all good.  Hmmm?

I am of the Germanic color scheme, mousy brown hair (I missed out on actually being truly blond) and blue eyes but my girls’ father, being Mediterranean, was of swarthy complexion and dark hair. When I was pregnant with my own children dominant chromosomes pretty much ensured that they would have the dark hair/dark eyes combo.  Despite this, through both my pregnancies my mother expressed the wish - no - actually the fervent desire, that one of them have the unlikely good fortune to have blue eyes to go with the dark hair.  Something about that combination struck my mother as extremely attractive.  I always did wonder why?    Hmmm?

Many people move to different countries but enjoy going back and visiting the country of their birth.  Memories are there, sometimes family is there or just to see how much things have changed since they left.  Whenever the subject was brought up to my mother she answered with a resounding “NO”.  She did not want to go back.  “Zer ver too many gott-dammed bad tings to remember”.  End of story!  No further discussion!!  Those “gott-dammed bad tings” had to be mixed with some “gutt tings” too, didn’t they?  But those were obviously outweighed … by what?  Hmmm? 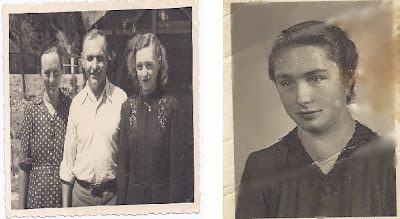 During her lifetime my mother lived in 4 different countries and learned 3 different languages.  She developed a love for all things living, cultivating houseplants, working in a massive home garden, nurturing pets and loving people.  She read voraciously (I come by it honestly).  She sewed, knitted and crocheted beautifully.  She was an awesome cook and (much to the detriment of my hips) baked marvelously.  She had an unswerving sense of right and wrong, with very little gray area in the mix.  She gave everyone the benefit of the doubt … ONCE ! … take advantage of that, and you were done as far as she was concerned (with the exception of my father who got more chances than any person ever deserved).  She worked hard but knew how to play.  She was not embarrassed to cry when she was sad or just because something touched her heart.  She had a joyful sense of humor and an honest, contagious laugh.  She loved babies.  She had a very healthy attitude towards life, sex, death and everything in-between.

Knowing all that about her makes me wonder even more just what happened during her years between 20 and 30.  So many things, good and bad, could have and probably did happen, however, in my imagination I see her having a once in a lifetime romance with a young, handsome, dark-haired, blue-eyed man.  What happened to him could only be a sad story so I try not to dwell on it.  In the deepest recesses of my heart and soul I hope she had that love affair.

I could be far off base but, of course, I’ll never know.  My parents are both gone now and I did have the sorry job of sorting through their things.  Unlike Jasmin in her book, I did not come across a mysterious picture that would lead to an explanation about everything.  At least I don’t think I did?  Maybe I should look at those pictures a little more closely?  I might find the image of a tall, dark, handsome stranger in the background. 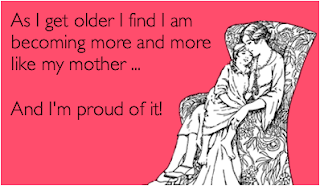