Smashwords is a wonderful site, where independent authors can self publish, self promote and make available any number of books.  Admittedly, some books are self-published for the simple reason that mainstream publishers did not deem them suitable for profitable retail sales, for good reason.

The site is easy to navigate and the choices are seemingly endless.  I have purchased a few excellent books and a couple of duds as well.  At the price point a dud once in a while is acceptable. (From their website) “Indie authors using the site earn 85% of their book’s sales.  Smashwords offers over 100,000 original ebooks.  Over 13,000 of those ebooks are regularly free and the average price of a Smashwords ebook is five dollars”.  Just to put that into perspective I also recently purchased a book at my local bookstore for which I paid full retail ($40).  It was written by an extremely successful, well known author and it, too, was a dud.

Despite the fact that I like the site, I am not blogging to extol the virtues of Smashwords, I just wanted to offer a little background.  On March 6th of this year Smashwords sent out an email to all subscribers informing them of an action being taken by online payment service, PayPal.   PayPal, under pressure from the large credit card companies requested “Smashwords to remove fiction that contains themes of bestiality, rape and incest”.

Smashwords response:
“Regardless on one’s opinions about these objectionable topics, we view this attempted censorship as a bad precedent.  Fiction is fantasy.  It is not real!

We believe it’s wrong for credit card companies, banks and other financial institutions to censor legal fiction.  We believe this censorship is targeting a small subset of erotica fiction.  The same-censored themes are prevalent in much mainstream fiction.  We believe it would be unfair to authors and readers alike for any organization to censor what writers are allowed to imagine and what readers are allowed to read.  If the PayPal restrictions were taken to the extreme, many mainstream classics including Nabakov’s Lolita or Margaret Mitchell’s Gone With the Wind could technically be banned.  The Girl With the Dragon Tattoo with its depiction of rape could be banned.  Even the Bible could fall under the net since it contains scenes of rape and incest.  Although such extreme censorship is unlikely, what about moderate censorship?  Therein lies the danger of censorship.  Where does it stop, and where do we draw the line?”

I do not search out books including the topics discussed in the censorship article, but must admit that all of the topics have been mentioned at one time or another in works of popular, mainstream fiction I have read.  I was going to put in a big disclaimer on bestiality, but there was a crime fiction book that did mention (thankfully not in detail) a pornographers collection of questionable pictures.  So there, I guess I should have been censored from picking that book up at Indigo.  Oh, and of course there was the book of Native Indian legends that told the story of the girl and the whale.  Oh, oh, and then there are the Women of the Otherworld books by Kelley Armstrong; werewolves and humans, demons and humans, etc.  I guess I am a little more twisted than I ever wanted to admit?
I have a difficult time with the censorship issue because on one hand I do not believe anyone has the right to dictate to me what I can and cannot read.  On the other hand I do certainly believe that some books should not be published at all; Paul Bernardo/Karla Homolka and Robert Pickton should never have been allowed to gain financially from their heinous crimes.  Yet I remember reading Vincent Bugliosi’s Helter Skelter with morbid fascination.

When I first read about the credit cards companies trying to flex a muscle to ban certain topics I was outraged.  How dare they?  Yet  - there I go fence sitting again … censorship really is a tough issue. 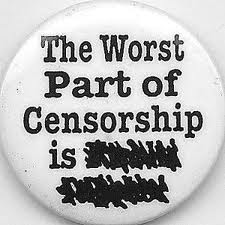 In certain instances censorship is necessary; I monitored what my children were reading to make sure it was age appropriate.  I think the rating system for movies and the warnings of content on television programming is a good thing.  I think keeping adult entertainment in a separate section of the video rental store is showing responsibility.

As an adult I believe I should be able to make my own choices and not have them dictated to me by, of all things, a credit card company.  As mentioned in the statement issued by Smashwords where is it all supposed to end?  Television shows depict violent acts all the time, witness programming like Law & Order SVU, any of the three CSI’s, The Sopranos and Dexter to name but a few.  Even Desperate Housewives and one particular episode of Big Bang Theory come into question.  And really, has anyone ever watched The Real Housewives of Beverly Hills?  Does that mean someone in the boardroom at Visa is going to decide that people can no longer pay their cable or satellite provider with a credit card.  Chapters/Indigo, besides the newest bestsellers has a large erotica section.  Does that mean someone in the AmEx boardroom will deem that their credit cards can only be used for purchases from the children’s department?  DiscoverCard would mandate payments for newspapers and magazines be made in cash only and of course MasterCard would surely pull their cards from being accepted at movie theaters.  Priceless!

Are we really that close to “Big Brother is watching”?  I thought my days of hiding under the covers with a flashlight to read Xavier Hollander were far behind me.

To sum it all up, I believe that under certain circumstances people should not be able to have books published, i.e. personal gain from a crime they themselves perpetrated.  Similar to not collecting the life insurance if you murder your spouse.  Responsible monitoring of material coming into the possession of minors or people without the mental capacity to deal with the subject matter is mandatory.

Folks, if you don't like something out there don't watch it, don't read it and don't buy it.  If it never sold it would not be purchased to be produced and published.  Kind of simple, really?

I am living my life without doing anything illegal, without causing harm (mental, emotional or physical) to myself, anyone or anything else.  Therefore, no one has the right to monitor or censor what I am watching, reading or listening to; not the government, not the church, not schools so most definitely not credit card companies! 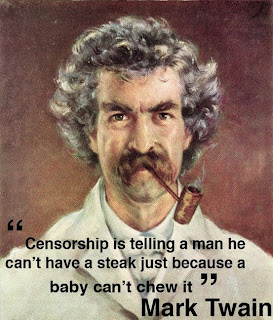 * As of this posting I have not heard any further news regarding the credit card/censorship issue.