Reading takes many forms and one of the most common would be picking up the daily paper.  Many bestsellers take their inspiration from the current headlines.  Me?  I have a personal aversion to reading the morning paper ... 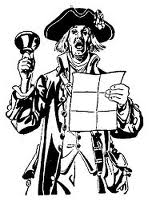 I walked into my neighborhood grocery store last Friday and noticed the local newspaper had set up a kiosk by the front entrance.  They were looking for people to subscribe to home delivery of the paper.  The “promo” was to subscribe to one month of home delivery and get the second month free – PLUS – they were offering each new subscriber a ten dollar voucher to use towards their grocery purchase that evening.

To me this was just one more indication that the newspaper, as we know it, is going the way of the Town Cryer and the corner Newspaper Boy … slipping slowly into non-existence.  Now, there is nothing I like better than a good deal and getting something for free ranks right up there at the top of the list.  I would have liked to help out the young lady sitting behind the table trying to drum up some interest.  I am in a sales related field so I understand about “numbers”, “quotas” and “commission sales” but I just could not take advantage of her wonderful offer.

I didn’t feel the need to explain it to her, but you see, I simply do not read the newspaper.

Why you may ask?

Because it is full of news! 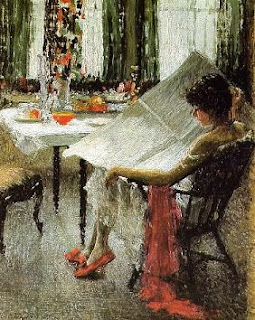 I once read the paper faithfully.  I had it delivered to my door everyday and would read what was happening in my community and around the world as I had my second cup of coffee in the morning.  It was a relaxing time before the rush of the day burst all around me.  I enjoyed the quiet.

Then one morning there was a story of a young boy. This young boy misbehaved and his parents thought that an appropriate punishment would be to submerge him in a bathtub full of ice for a while.  His brother found him shivering in the tub and struggled to get his little body out of the ice.  He took him to the bed they shared and hugged him to try and warm him up.  The little boy died in his younger brother’s arms.
As I picked up my coffee cup I realized there were tears rolling down my cheeks.  As much as I believe it is important for people to know this kind of abuse goes on, I did not feel the need to read every! excruciating! detail! as a side dish to my breakfast. 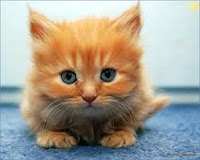 Although outraged and upset at the time, I did what I am sure most of the readers of the paper did that morning.  I put the whole thing out of my mind in order to get on with my day.  Obviously I did not put it out of my mind successfully enough since it still haunts me all these many years later.  The next week I read an article about a young man who thought it would be amusing to hang cats and kittens in order to skin them alive in front of a video camera.  This was the second time in two weeks I was sobbing first thing in the morning.  I very calmly closed the newspaper, put it in the recycling box and later called to cancel my subscription.  I chose to become an ostrich that day.  Bury my head happily in the sand and pretend that all is well in the world around me.

I am not naïve.  I do realize horrible things go on in the world every day.  They always have and always will.  People of a certain generation think the world is going to hell in a hand basket because so many more horrible events are happening than ever before.  I do not think that is true … I believe we live in this wonderful electronic age where news is transmitted in milliseconds.  We are bombarded with information “as it happens” and headlines change in minutes rather than days.  If something major happened 50, or even 20, years ago it made the next day’s headlines … maybe … if it happened to be a day the paper published.  In 2012 I receive similar news on my YaHoo! homepage with the tag line “2 minutes ago”.  And generally, unless it is an update on Lindsay’s latest caper, Jennifer’s latest fashion blunder or the score in the hockey game, you can bet its “bad news”.  Hell, I can even sign on to Twitter and get the whole story, from various sources, in 140 characters or less.

Breaking news is important, but did I really need to see, up close and in living color, Khadaffi’s bullet ridden body?

Are we so desensitized?  Does seeing the horrors that other’s perpetrate make the bloody nose your son gave his friend in the playground less grievous and somehow more acceptable?   Is it all right to help yourself to life’s proverbial cookie jar because you didn’t actually “hurt” anybody? 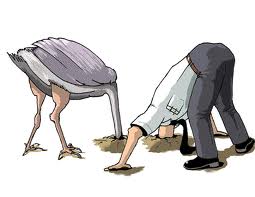 I truly believe I am not alone in my “ostrich-ness”.  Other people must be craving some positive news too.  Does that explain the recent success of social sites such as www.pinterest.com?  It’s a marvelous time waster, but really, why should I care about your favorite books, how you want to decorate your house, the latest must have for your wardrobe or what tickles your funny bone.

But people do enjoy it … and with guilty pleasure so do I … its feel-good sharing, fun, colorful, informative and, so far, positive.

Anyway …back on track …

Should I have taken advantage of the newspaper’s subscription offer?  Oh, probably.  I do care about what is going on around me.  In my own defense if it’s big news someone will be taking about it, it will be on my home page when I sign on to check my email and it will be the headline on the newspaper in the box outside the coffee shop.

If the world as we know it is going to end with a bomb being dropped, then I hope it damn well hits me on the head because I am not the survivalist type who could help to rebuild post-apocalypse society.

I do have a rather personal side note to any terrorists, despots, dictators, future world dominators, megalomaniacs or earth destroying aliens who might, on the off chance, be reading my blog?  If you are planning to drop that weapon of mass destruction on my head could you give me a quick call first?  I promise I won’t tell anyone, but I would really, really, really like that one piece of chocolate cheesecake before it’s too late.

Email ThisBlogThis!Share to TwitterShare to FacebookShare to Pinterest
Labels: Current Events into Fiction