I applaud science and technology!


I do not always understand it, but I definitely applaud it!

Technology has allowed us to see into space, to look into our bodies and to examine the structure of things down to the tiniest of atoms and neutrons. On a personal level, technology has allowed me to do my banking in my pajamas, to be entertained by little boxes all over my home and to meet people I may not have otherwise known existed.

Taking all of this in stride, science and technology also scare me!

Scientists in Cern are now conducting experiments to replicate the infamous "BIG BANG". On Wednesday, September 10th, 2008 the start-up team in Geneva announced they had achieved "first beam" at the LHC (Large Hadron Collider). This LHC is touted as the "biggest and most complex scientific instrument ever built". The sheer size of this instrument is mind boggling. It straddles the borders of Switzerland and France between Lake Geneva and the Jura mountains. This LHC is also supposed to prove Einstein's famous equation E=MC squared. Energy and matter are interchangeable and the LHC is expected to create new particles and hopefully provide answers to the mysteries of mass, gravity, invisible dark matter and the current state of the universe. That is one tall order!

The LHC could also produce the first evidence of extra spatial dimensions and even create mini-black holes that blink in and out of existence in a fraction of a second.

The "switch-on" occurred the morning of the 10th with hand-wringing scientists anxiously counting down to what amounted to a "blip" on their computer screen. This "blip" confirmed that the machine was working. This "blip" indicated that a particle beam had been injected and traveled all the way around the machine. To my simple-minded understanding of this experiment, scientists will then inject another particle beam travelling in the opposite direction. These two beams will collide and it will replicate the "BIG BANG". They want to see what the universe looked like a billionth of a second after the Big Bang.

What is it they are looking for?

Apparently an elusive particle, so small and so weightless it has never been discovered before. They are assuming the existence of "Higgs-boson", also known as "the God particle". This Higgs-boson is so small no instrument has found it; but in the subatomic world it is reported to be a monster. And, it can only exist for an immeasurable fraction of a second before it disintegrates. Hmmm, makes me wonder? Making it even more interesting is the fact that the LHC will not catch Higgs-boson BUT the machinery will pick up proof that a Higgs-boson was there for a "fraction of a millisecond". How you may ask? I know I did. Well, they will know from the debris left behind from its disintegration.

This theory I can relate to. It's similar to the crumbs left on the plate after no one ate the cake that once rested there.

Now, if the experiment at Cern does not produce a Higgs-boson, then scientists will have to retrace their steps and think up a whole new explanation for life ... the universe … everything!

Part one is now complete.  So far ... So good!  You're reading this, so obviously the world has not come to an end.  May I suggest you read faster, no one knows what tomorrow might bring?

In October 2008 they will start colliding the two particle beams. Apparently "this will be like concentrating the energy from a head-on collision between two high-speed electric trains into a pinpoint". The chief executive of the Science and Technologies Facilities Council is quite enthusiastic about the whole thing stating; "I believe we are poised on the threshold of a new age of physics. Scientists waiting for the LHC dare to ask the biggest questions that exist in modern science". Dr. Robert Kirby-Harris, chief executive of the Institute of Physics forecasts that "the technological payback will be huge. The need to deal with the vast quantities of data the LHC will produce has already resulted in new grid technology to increase storage and capacity, and improve the capacity of the Internet to carry more and more data.  Dr. Kirby-Harris goes on to say; "And I have no doubt that this will encourage more school students to study physics – exactly what the UK needs to ensure a vibrant future."

That brings us to the crux of the matter … "TO ENSURE A VIBRANT FUTURE!"  Future?

There is always a downside, isn't there. What might some unforeseeable consequences of this experiment be? The "side-effects" you might say?

One theory is that time travelers will use the wormhole in the space-time continuum generated in the LHC to pay us a visit. Okay, depending on who comes through said wormhole, not so bad, even down right interesting. None of the articles I read stated whether these time travelers would be coming from the past or from the future.

Another theory is that mankind may not benefit at all from this experiment. In fact, mankind may not be around at all. Creating a black hole was "mentioned" as a remote possibility. "Wait a minute" people asked. "Don't black holes suck whole planets, indeed whole galaxies, into a murky, unimaginable oblivion?" No worries apparently, according to the Safety Assessment Group at Cern, "the chance we produce a black hole is miniscule. And even if we do, it can't swallow up the Earth". The question just begs to be asked, doesn't it? Not the Earth, then what – just Geneva? Just Switzerland? But it's not just ordinary folks who are worried, Walter L. Wagner and Luis Sancho, two scientists in Hawaii filed a suit at the Federal District Court in Honolulu demanding that the Collider experiment be postponed until improved safety reports were produced.

Direct quote from THE INDEPENDENT SCIENCE AND NEWS – "We needn't, it seems, be too alarmed. Professor Stephen Hawking came on Radio Four's Today to reassure listeners that the world would not end. But he revealed he'd bet someone 100 Pound Sterling about whether the Higgs-boson particle would be discovered. Stephen Hawking bets on the outcome? One recalls that Robert Oppenheimer had a bet with other members of the Manhattan Project that the first A-bomb would kick off a chain reaction that would kill the Earth's atmosphere. The last thing you want to see in Geneva today is a scientist taking bets."

Oh – I almost forgot – the total cost of all this experimentation to date … NINE BILLION DOLLARS!

To say that all this concerns me would be an apt statement.

I like to have faith in people who are more "highly educated" than myself. The same people who might actually grasp the specifics of quantum physics.

I like to think that I am not prone to following all the drama of the doomsday prophecies. I did not panic about Y2K happening.  I never would have willingly participated in Jonestown.  I have never stood on a hilltop at midnight waiting for the mothership (although my children do have specific instructions: if they are ever abducted by aliens, they are to try and convince those aliens to swing by and pick me up too).

I like to think that I am open minded enough to ponder the realities of the Big Bang theory and I truly am curious to see if it can be proven. All moral fallout aside (Really - Really - Really NOT wanting to even get into individual morality and religion about this) I would like to see it proven that the Big Bang is a viable explanation for our planet and life as we know it.

Do I think that it is safe to do so in Cern?

I would rather not take the chance and keep wondering … Reiteration - to say that all this concerns me would be an apt statement!

I know that I am treading the fine line of blogging etiquette now by taking a point I wished to make into the realm of rambling. But what the hell, I've gone this far. 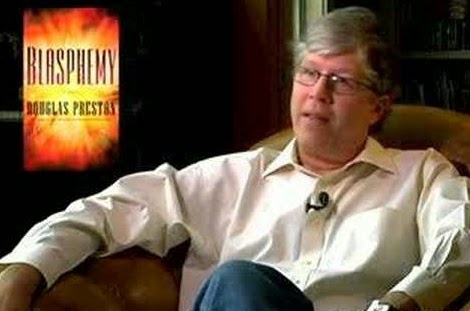 Not too long ago I read a book called BLASPHEMY by Douglas Preston. Mr. Preston has a strong scientific background (and some totally weird connection with L. Ron Hubbard). The central premise of the book was exactly what happened in Cern yesterday. Being knowledgeable about science himself, was Mr. Preston aware that this LHC was being built? Did he, thusly, write a somewhat intriguing work of fiction around it? My guess would be yes. Does he lean one way or another in the outcome of this experiment? Again, my guess would be yes.

Now I want to know just how strong his scientific background is!!

Because ... Interestingly enough  … the book did not end well!

Email ThisBlogThis!Share to TwitterShare to FacebookShare to Pinterest
Labels: Current Events into Fiction