I Went on an Author Binge

Every once in a while I will "author binge" if I want to get caught up on a series.  This binge was unplanned but when these three books all appeared on the hold shelf at the library in the same week it was destined to happen.  Yrsa Sigurdardottir has worked her way onto my favorite authors list. 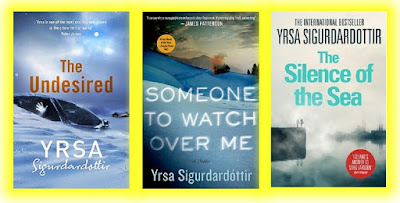 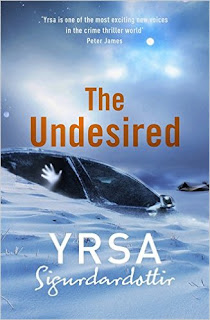 THE UNDESIRED by Yrsa Sigurdardottir

This book starts at the (almost) end of the story – two people trapped in a car barely conscious, suffering from carbon monoxide poisoning.  It’s a good start since obviously, as the story proper begins on the next page, I am already hooked wanting to find out the who, what, where, when and why of the whole thing.

Odinn’s days as an occasional weekend dad are over.  With the accidental (or maybe not?) death of his ex-wife he now has sole responsibility for his daughter’s care.  Although he embraces this change in his lifestyle his daughter’s recovery from the shock of her mother’s death is something he is ill prepared to deal with … especially when he has no recollection of where he was during those fatal hours.  Add to that the fact that his ex-wife seems to be haunting both him and his daughter, his life has definitely taken a spiral into the unknown.

While all this is going on in his personal life he has also been tasked with a new assignment at work.  The new job is not overly difficult for him to tackle, but once again things are not as they seem and the further he investigates a, now defunct, home for boys where two other accidental deaths occurred.   It takes a little turn towards the sinister when the facts he unearths take an unexpected turn to intersect with his own life.

This story is told in two narratives which begin to come together about two thirds of the way through the book.  I have come to expect this style in Ms. Sigurdardottir’s works.  She utilizes this writing style well and since I am aware of it I find it adds to the suspense of the book.  I catch myself reading a little faster after the halfway mark – curious to find out how the two story lines are going to intersect – I was not disappointed when I came to the surprise revelation being honestly able to say “I really didn’t see it coming”.

In the stand-alone books I have read by this author there is always a ghostly element to them that appeals to my enjoyment of a good “creepy” factor.  It is not always a ghost but Ms. Sigurdardottir absolutely has the talent to string me along and give me some chills along the way!

This was an entertaining read that kept me turning the pages so I’ll put it at a solid four stars. 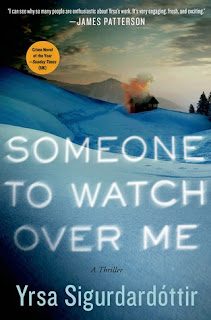 SOMEONE TO WATCH OVER ME by Yrsa Sigurdardottir

I seem to be picking up an awful lot of books lately where the plot is centered on group homes and care facilities that are closed and have shady reputations.  This fifth book in the Thora Gudmundsdottir is another.

On a personal note before I get into my review … When a reader picks up a crime thriller they have to expect some degree of grisly and gruesome and this book is no exception.  I’d have to recommend that this is not one for the squeamish.  In “Someone to Watch Over Me” Ms. Sigurdardottir has added the somewhat unique element of having many of her characters (and victims) being special needs individuals.  I have to give Ms. Sigurdardottir some extra props for her ability to write this story.  She shows sensitivity to her characters and allows the readers to vicariously experience some of challenges faced by the families of people who are physically and mentally challenged.  She also subtly confronts the “system” in whose care individuals often find themselves.  It adds a special degree of complexity and heart to this well-written “crime thriller”.

Jakob is a young man with Down’s Syndrome who found himself, despite his reluctance and his mother’s strong misgivings, placed in an experimental care facility for young people with various forms and degrees of physical and/or emotional disabilities.  One night a mysterious fire consumes the home killing all the residents except Jakob and another young woman who had been admitted to the hospital days before.  In his limited capacity to express himself the only thing he can say is that he saw an angel carrying a suitcase before the fire started.  This information makes no sense to police and fire officials and Jakob finds himself convicted of arson.  All Jakob wants to do is go back home and live with his mother, instead now resides in a facility for the criminally insane.  Against all odds he befriends a serial killer/pedophile also incarcerated there who has the wherewithal to fund a new defense effort for Jakob.  Enter Thora.

As Thora investigates Jakob’s case she discovers many inconsistencies and overlooked elements that should have exonerated Jakob before his trial ever started, but how can she put them together in such as a way as to convince the courts to reopen his case.  The deeper she digs the more startling the case becomes.

As expected from Ms. Sigurdardottir there is a concurrent story line in this book about a young girl who was killed in a hit and run accident.  While it did add a tingly ghostly element to the book this story line had me a little perplexed as it featured a family in no way related to any of the other characters in the book (so, foolishly, thought I).  I should have known better!  Ms. Sigurdardottir skillfully brought the two elements together at the end in a most satisfying manner.  Well done again by this, now favorite of mine, author! 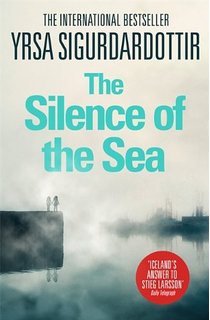 THE SILENCE OF THE SEA by Yrsa Sigurdardottir.

With downturn in the Icelandic economy payments on a luxury yacht have gone into default.  The owner and his new trophy wife are nowhere to be found.  The bank hopes to repossess the yacht.  The young man charged with returning the vessel from Spain to Iceland decides that this would be his one and only opportunity to ever enjoy sailing on a private yacht and brings along his wife and young twin daughters for a mini-vacation.  That was a decision he would quickly come to regret.  When the yacht enters the harbor at Reykjavik it crashes into the pier, shocking those waiting on shore to greet the passengers.  As it turns out, there are no passengers.

This sixth entry into the Thora Gudmundsdottir series is a little step away from the ordinary on the part of Ms. Sigurdardottir.  Always a good thing when a writer (and reader) find themselves six books into a series.  The setting for this book is primarily on board the yacht and since it is a crime thriller I found this lent the story a little bit of a “Ten Little Indians” feel.  Not necessarily a bad thing?

“The Silence of the Sea” had the prerequisite twists, turns and surprises – always well done by this author.  Despite that and the truly heart-wrenching ending, I found it was not one of my favorites.  On a positive note Ms. Sigurdartdottir gave me a more-than-usual glimpse of Bella, a character I enjoy very much.  As I’ve said in previous reviews I would like to see a book where Bella has an even more prominent role.  Bella is just weirdly fun, often obnoxious, manipulative yet deceptively smart all rolled into one.

I would rate this one at three and half stars – the extra half going to the misty-eyed shock at the end. 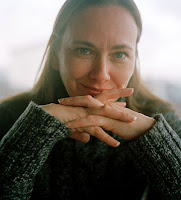 Yrsa Sigurdardóttir (b. 1963) is the internationally best selling Icelandic crime author of the award-winning Thóra Gudmundsdóttir series and several stand-alone thrillers. Sigurdardóttir made her crime fiction debut in 2005 with Last Rituals, which has been translated into more than 30 languages. Universally hailed as one of the finest crime writers of our time, Yrsa Sigurdardóttir’s new series about Freyja & Huldar shows a master storyteller at the top of her game.
Posted by Unknown at 4/08/2016