The Watcher in the Wall - A Review

THE WATCHER IN THE WALL by Owen Laukkanen 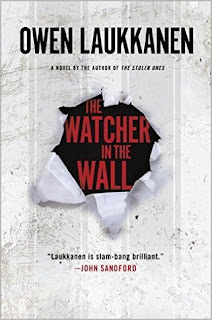 It’s a sad fact, but a fact none-the-less; teenagers commit suicide.  Thousands of young people take their own lives every year so what made Adrian Miller’s death so different?   Kirk Stevens daughter went to school with Adrian and while they were not close friends – Adrian didn’t really have any friends – she comes to her father’s FBI-BCA office with a concern that cannot be ignored; Adrian had some online help in ending his life.

Although this is not the type of case that usually gets the attention of Kirk Stevens, Carla Windermere and their team Kirk’s daughter’s insistence makes them take a closer look … but how do you find a killer that lurks behind the walls of many private websites and chatrooms using even more alias’?  Especially when the stakes are getting higher and more kids are on the suicide track thanks to a bullied kid who turned into a bully himself – the kind of bully that kills without once stepping away from the keyboard.

“The Watcher in the Wall” is the fifth in the Stevens/Windermere series and, in my opinion, the best of the bunch so far.  Mr. Laukkanen finally gives up on the secret attraction between Carla and Kirk and lets them get on with the police work they do so well.  Without that trope distracting me I found this moved along at a nice brisk pace.  In the past books, which I enjoyed a great deal, we learned a lot about Kirk Stevens’ private life and in this one it was time to learn a little bit more about Carla Windermere and what we learn gives credence to her doggedness in wanting to solve this case.

Any time an author undertakes writing a series there is always the “cookie-cutter” element which admittedly, after Mr. Laukkanen’s last book I was afraid was beginning to seep into this series but this book totally eliminated that fear.   The ending was a little overdone in terms of the bad guy’s stamina, but still a solid entry into the series.

As I read the author acknowledgement at the end of the book it became clear to me why  I felt this entry was a step above the rest in the series.  As Mr. Laukkanen explains ...

“Watcher in the Wall” is inspired very loosely by real-life incidents, but it’s also a fairly personal book for me.  I’ve dealt with depression and suicidal thoughts since I was a teenager, and it’s only now, two decades later, that I’ve started taking real steps to deal with it.  In some ways, this book is a response to the dark stuff.”

It takes courage to put your personal demons into a book even if it is a work of fiction and no doubt that is part of what made such a good read.

ABOUT THE AUTHOR (from his webpage)

A graduate of the University of British Columbia’s Creative Writing program, Laukkanen spent three years in the world of professional poker reporting before turning to fiction. He currently lives in Vancouver, where he’s hard at work on the sixth installment in the Stevens and Windermere series.
Posted by Unknown at 4/27/2016