I haven’t posted one of these in quite some time, but I do love it when a character in a book loves books!

From “Eight Days” by Scott Thompson (my review coming soon) 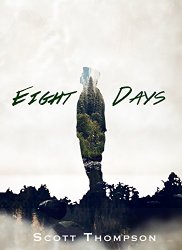 “Clive went to his bookshelf and ran his fingers across the books that had brought him comfort during his life and he wasn’t surprised that they still brought him comfort.  He felt the dry leather that covered a book of his father’s and he knelt down to smell the musty pages.  Over the years, he had always kept his favorite books close to him.  He had a larger bookshelf in his bedroom, but the books he wanted close to him during his waking hours he kept there.


“You mean you don’t plan to read in Heaven?”


“So there are books in Heaven?”


“Yeah, sure.  The best books ever written line the shelves of libraries that stretch for miles.”  Pachu looked off in an imaginary distance like he was surveying the shelves.  “The most dedicated librarians in history maintain and collect the great works.”  Pachu tapped the top of Clive’s bookshelf with his hand.  “Even books that were never published on Earth are there.  Beautiful stories that were written by authors who doubted that they had the talent to share their tales.  They gain confidence up there and finally share their writing.  Twain was good, I’ll admit, but I think you’ll be impressed with the talented authors you never heard of here.  You can meet them.  We often have readings.”


Clive never imagined books in Heaven.  But he had never thought much about Heaven.  People spoke of seeing your loved ones again and that sounded great, but the rest never appealed much to him.  Walking golden streets and singing in a giant choir was fine, but also boring after a while.  If there were books to read, and authors to hear, and concerts, what else was there?”
Posted by Unknown at 4/20/2016

Email ThisBlogThis!Share to TwitterShare to FacebookShare to Pinterest
Labels: BOOKS ON BOOKS