I don’t have a horse in the race but I have been watching with equal parts amusement and trepidation what is going on in the U.S. presidential election.  I’ve also heard much chatter from famous and not-so famous folks about moving to Canada if Mr. Trump is successful in his bid for office.  Having swept five primaries in the Eastern states Mr. Trump has thrown down the gauntlet … 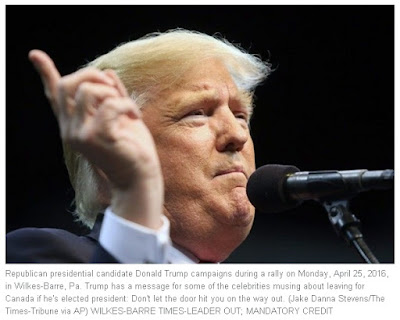 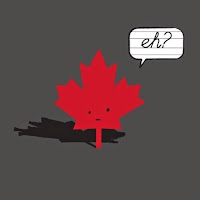 When you get here and you feel ready to go “oot and aboot” (which we DO NOT really say) I’d love to meet you at Timmies for a double double.  Then I can explain some things such as why the air hurts your face in January?  Why, if you pay for your $1.98 purchase with a Toonie you will not get any change back?  And just exactly how many calories there are in Poutine (LOTS)!  Aside from those important things, being your friendly neighbour (YES – we put the letter ‘u’ in strange places in words - curse you American spell-check) to the north I thought I’d help out with the learning curve.  So, here’s a list of books and other things that may make your transition from ‘merican to canajun a little easier.

Just one more thing ... I’m sorry (yes, it’s true, we do apologize often and for no reason) even I cannot explain why books cost more in Canada than in the U.S. 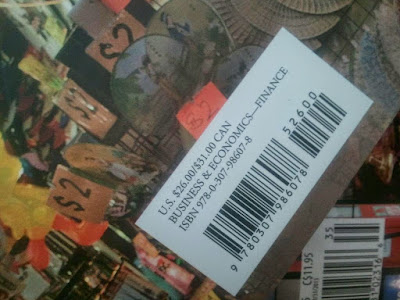 This is basically an American to Canadian word and phrase book.  You should probably carry it around with you for the first little while, as it will help explain some of the differences in our English.  Examples such as knowing how to pronounce “Tronno” will keep you from getting embarrassed because if you pronounce the second ‘t’ in Toronto … well … it’s a dead giveaway that you are not from here.  It will also help you out with common acronyms such as “Arsee-Empee” (R.C.M.P.) – Dudley Do-Right et.al.

Only in Canada You Say

This is an excellent companion book to Canajun, Eh?  Ask any Canadian about a distinctly Canadian form of English, and most will offer an enthusiastic Bob-and-Doug-McKenzie 'eh' in response. A passionate few might also bring up the colour vs. color debate or our pronunciations of 'out' and 'about'. And some may point to the ubiquitous Canadian toque as evidence of a language that is all our own. If this is your idea of Canadian English, then it might surprise you that Katherine Barber, Editor-in-Chief of the best-selling Canadian Oxford Dictionary and author of the best-selling Six Words You Never Knew Had Something to Do With Pigs, has written a new book filled with nothing but made-in-Canada vocabulary. Only in Canada You Say highlights more than 1,200 words and phrases that are unique to our neck of the woods. Did you know, for example, that every time you ask for Gravol at the drug store, you're using a word that is unknown anywhere else? That those tasty butter tarts your mother used to make don't exist beyond our borders? Or that there are three distinctly Canadian sex words? And jokes about living in the Great White North aside, it is still pretty interesting to discover that there are 17 Canadian words for ice!

A frenetic celebration of all things Canucky … the sort of result you might get if you pumped Dave Barry full of maple syrup and Moosehead, then left him tied up in a sack for a week with Ron James and the Littlest Hobo.  If none of that makes any sense then I guess you need to check out the book? 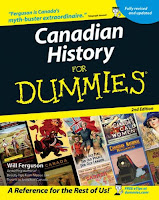 Canadian History for Dummies by Will Ferguson

This just proves that contrary to popular belief and the opinion of all grade seven students in the Canadian school system Canadian History can be fun!

Truthfully, almost anything by Will Ferguson that you can get your hands on will help your transition.

Mr. Fergusons was born in the former fur-trading post of Vermilion (population 840) in Northern Canada.  After some traveling and marriage Mr. Ferguson and his wife moved to Prince Edward Island where Mr. Ferguson found work with a local travel company selling Ann of Green Gables tours to Japanese tourists.  (Really … if that doesn’t qualify you as an expert on all things Canadian I don’t know what does?)

Will Ferguson's publishing debut, Why I Hate Canadians, was released in September 1997, and went on to sell over 50,000 copies.

The follow-up, How to Be a Canadian, written with his brother Ian, has now sold 200,000 copies and won the CBA Libris Award for Non-Fiction Book of the Year. 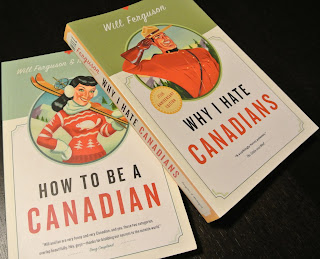 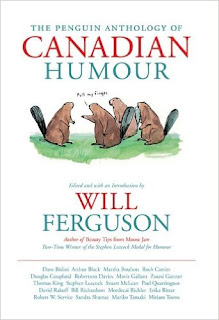 In 2002, Will Ferguson was shortlisted twice for the Stephen Leacock Medal for Humour: once for Happiness(aka. "Generica") and again for How to Be a Canadian.  There are only five books on the final shortlist, and this was the first time in the history of the Leacock Award that an author had been nominated twice in the same year. (Happiness went on to win.)

In 2005, he won his second Leacock Award for Beauty Tips from Moose Jaw. He was also awarded the Pierre Berton Award by Canada’s National History Society.

Speaking of Pierre Berton, anyone wanting to take a more serious approach to learning about The Great White North should most definitely invest in a personal library of Mr. Berton’s books.

Pierre Berton spent his early newspaper career in Vancouver, where at 21 he was the youngest city editor on any Canadian daily. He moved to Toronto in 1947, and at the age of 31 was named managing editor of Maclean's magazine. In 1957, he became a key member of the CBC's public affairs flagship program, Close-Up, and a permanent panelist on Front Page Challenge. He joined The Toronto Star as associate editor and columnist in 1958, leaving in 1962 to commence The Pierre Berton Show, which ran until 1973.

His books include “My Country” in which Mr. Berton brings the past alive with true stories of mystery and romance, tragedy and heroism, from the piracy of Bill Johnston, scourge of the St. Lawrence, to the weird saga of Brother XII and his mystic cult on Vancouver Island.

“Niagara” which is full of heroes and villains, eccentrics and daredevils, scientists, and power brokers, Niagara has a contemporary resonance: how a great natural wonder created both the industrial heartland of southern Ontario and the worst pollution on the continent.

“The Invasion of Canada” … to America's leaders in 1812, an invasion of Canada seemed to be "a mere matter of marching," as Thomas Jefferson confidently predicted. How could a nation of 8 million fail to subdue a struggling colony of 300,000? Yet, when the campaign of 1812 ended, the only Americans left on Canadian soil were prisoners of war.

Should you not want to immigrate to Canada you might consider reading the Canada Party Manifesto, “America, But Better”.  As the American election increasingly resembles a production of CATS performed by actual cats, U.S. citizens are looking for a new leader. That leader is Canada, and they want your vote for president of the United States.

Since launching their viral video campaign in January, the Canada Party has been covered around the world, including CNN, BBC, the Huffington Post, and German State Television. America, but Better: the Canada Party Manifesto, balances the doctrine of American exceptionalism with a dose of Canadian humility and common sense to secure Canada as the new leader of the free world, by proxy.

Their promises: One gay couple will be allowed to marry for every straight couple that gets divorced. The phrase "job creators" will be changed to "job creationists," and they will be given seven days to actually create some.  Corporations will still be people, but if they can't provide a birth certificate they will be legally obligated to care for your lawn. Corners will be installed in the Oval Office, and timeouts given to congressmen who can't play nice.

Devoted to restoring America to its former glory, the Canada Party will soon have the whole world chanting, "Yes We Canada."

If reading isn’t your style you can always resort to film.

The recent documentary style movie “Being Canadian” takes you on a tour of well-known and out-of-the-way places with some of Canada’s iconic celebrities … you know, those folks that will be making their back across the border should … well you know!

And, of course, “Men With Brooms”, this movie will not only teach you what you need to know about curling (sort of) but also what to do if you end up trapped in the middle of a colony (yes, that’s what a group of beavers is called – you’re welcome) and how to get the Canadian girl of your dreams (if you are Paul Gross that is). 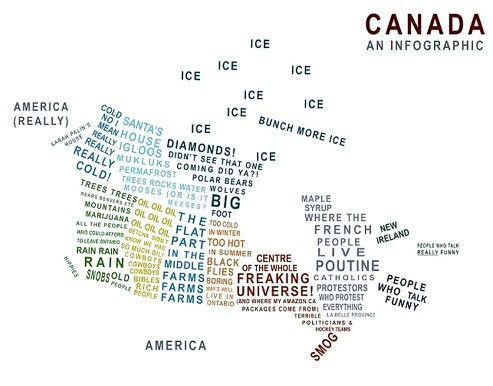