The Teacher - A Review

THE TEACHER by Katerina Diamond 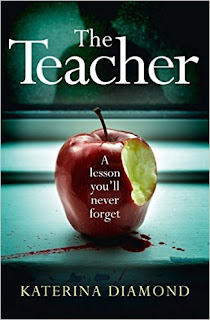 “The Teacher” is a solid debut novel by Katerina Diamond.  That’s not to say that it does not have its flaws, but still a very enjoyable read for fans of the crime/thriller genre.  Is it even appropriate to use the word “enjoyable” for a novel this gruesome?  The tag line “Not for the faint of heart” is a valid warning.

As the book opens the head master at a very prestigious private school in Devon receives a package.  He knows what the package contains without opening it and is also aware of the fact that it foreshadows his death.  He is not wrong.  The next morning he is found hanging from the rafters in the school’s assembly hall.  Before he died he sent a very cryptic note to someone, simply saying “HE HAS RETURNED”.

So begin a series of murders … one more ghoulishly gory than the next … perpetrated on influential, well-respected members of the local community.  DS Miles, just recently returned to duty after an enforced leave and DS Grey, new to the detachment, catch the first case but in a sudden turn of events the powers that be are doing everything they can to keep them at arm’s length from the investigation.  Circumstances, however, have a different agenda and the two investigators keep getting drawn in further and further, until it seems they themselves might not survive this case.

Admittedly, the plot itself is not a new one – revenge for past sins – it has been done countless times before.  As a probably unfair example because their release dates were to close together, but having recently read “Brotherhood in Death” by J.D. Robb (aka Nora Roberts) this book is a hair’s breadth away from being called “fan fiction”, but Ms. Diamond does give it a couple of new twists.  It is page-turner and I enjoyed the read.

Now about those flaws I mentioned at the beginning of this review?  The writing (editing?) could have been a little better as some parts were confusing; too many similar character names … Abbey, Adrian, Andrea … and then, often referring to characters by their first names and then their last names, sometimes in the same paragraph.  Throw in some nicknames and it definitely required some rereading of sentences to keep them all straight.  Not something I want to do when I’m reading an otherwise fast paced crime thriller.

Every character in this novel was somehow “damaged” from previous life events.  I understand an author building empathy for the characters and understanding for the character’s decisions and actions, but it would have been nice if just one person in the book had suffered no trauma – even fictional characters need a shoulder to lean on once in a while.

Frustrating for me as well, certain threads of the story were dropped along the way with no explanation or closure. (The package that arrived at the beginning of book – it seemed significant but then it was placed in a desk drawer, still unwrapped, and never mentioned again.  Did the police miss it?  Parker’s dog – in the story for a few chapters to move the action forward and then never heard from again?)

Some of the action was gratuitous and a little far-fetched (Christian’s eventual fate) even for crime thriller fiction.  Cringe-worthy to be sure but it felt slightly misplaced in the story, as if the author added it because she could.

Shaking off the first book jitters Ms. Diamond could be a crime writer to keep on the radar so I stand by my first statement; a solid debut novel and fans of crime thrillers will certainly enjoy it.  I understand that her second novel, “The Secret” is due to be released in October 2016 and also features DS’s Miles and Grey so obviously this is the first of a series.  I would not hesitate to pick it up, just to see where the story (and the writing) goes.

I’d like to thank the publisher, Harper Collins UK, Avon and Netgalley for providing me with an advance copy of this book in exchange for an honest review.

Katerina Diamond was born in Weston in the seventies, and her parents owned a fish and chip shop in the Greek community. She moved to Thessaloniki in Greece and attended Greek school where she learnt Greek in just 6 months. After her parents’ divorce, they relocated to Devon. After school, and working in her uncle’s fish and chip shop, she went (briefly) to university at Derby, where she met her husband and had two children. Katerina now lives in the East Kent Coast with her husband and children. This is her first nove
Posted by Unknown at 5/05/2016