Soft in the Head - A Review

SOFT IN THE HEAD by Marie-Sabine Roger

“I’ve decided to adopt Margueritte.  She’ll be eighty-six any day now so there seemed no point putting it off.  Old people have a tendency to die.” 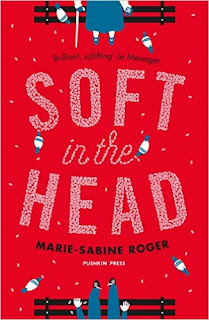 So begins this lovely story of how a chance meeting can change your life for the better.

All his life Germain has been told he was a “half-wit” and a little “soft in the head”.  Germain was handed a horrible set of circumstances from the get-go; a father who didn’t know he existed, a mother who was abusive and provided only the bare necessities of life – not interested enough to make him attend school and who never said “I love you”.  As an adult he lived his life in the same manner; whittling to pass the time, taking jobs only to pay for living expenses and for only long enough to, once again, qualify for unemployment and spending the rest of his time in the local bar where his friends made sure he was the butt of all their jokes.  The only things he is passionate about are (occasionally) his girlfriend and his garden.

“…with people, it’s just the same: just because you’re uncultivated doesn’t mean you’re not cultivable.  You just need to stumble on the right gardener.  Find the wrong one, one with no experience and you’re a botched job.”

A meager and sad existence until one day while counting pigeons (one of his favorite past times) at the local park he strikes up a conversation with Margueritte, an elderly lady who it turns out also happens to enjoy counting the pigeons.  This most unlikely hobby to have in common sets them on the course that will change Germain’s way of looking at life and, more importantly, at himself.

Margueritte is intelligent, was a successful career woman in her younger days and most importantly to our story, she loves to read … especially out loud to Germain.  With the gift of a dictionary, some lovingly prepared helpful notes, the stunning revelation that anyone can use the library for free and news of a devastating health crisis Germain becomes determined to improve himself for Margueritte.

There were so many parts of this book that I loved; Margueritte’s patience, Germain’s determination and growth as a character, their mutual love of books and the psuedo-grandmother/grandson relationship Margueritte and Germain nurtured.

While the book is not overly lengthy it is written well, the first part feeling a bit crass and unrefined and then slowly becoming kinder and a little easier to read.  Since it is a first person narrative by Germain, this perfectly reflects his personal journey.

I enjoyed the fact that it was an ode to literacy, reading and power of words.

At times I was not certain the above were enough to offset the part of the book I did not enjoy – with the exception of Margueritte, I pretty much disliked all of the characters, including at times Germain.

This book was translated from it’s original French, and while I am sure that it is an excellent translation, I feel that in the way that humor often does not translate well, “Soft in the Head” lost some of its necessary pathos in the same way.  I’m rating it at 3 ½ stars because it is worthwhile read for the parts that do shine.

My favorite quote from the book …

“He talks better than me, I’ll give him that.
But what use is that if he’s got nothing to say?”


I would like to thank the publisher Pushkin Press, via Netgalley, for providing me with the book at no charge in exchange for an honest review. 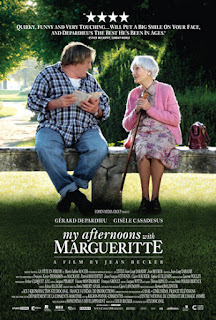 I did not realize that this book was also made into a film titled “My Afternoons with Margueritte”.   While I can see this being a wonderful film I must admit that in my imagination while reading the book, Gerard Depardieu is definitely not the personification I pictured as Germain.  Now my curiosity is piqued and I’ll have to see if I can hunt down this film somewhere. 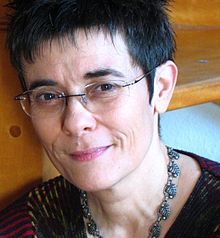 ABOUT THE AUTHOR (from DTV.com)

Marie-Sabine Roger, born near Bordeaux in 1957, for some years worked as an elementary school teacher before she entirely devoted her time to writing. After long stays in Quebec, Madagascar and Reunion Island, she now lives with her family in Charente, West France. Her novels have been awarded with several prizes and translated into numerous languages. She last charmed hundreds of thousands with “The Labyrinth of Words”, “The Poet of Small Things” and “Life is a Cunning Cat”.
Posted by Unknown at 5/02/2016