The Stopped Heart - A Review

THE STOPPED HEART  by Julie Myerson 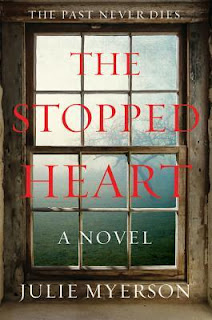 I turned the last page of this book on Sunday.  I put it on a side table and mulled it over for a little while, thinking about it every time I caught a glimpse of it lying on the table.  How was a going to try and write a review when I couldn’t even decide whether I liked the book or not?

Fair warning here, the words “time line” are going to be WAY overused in this review.

Mary and Graham Coles are desperately trying to carry on with their lives after the devastating crime that took their two daughters.  As many people do, they decided that a change of location might help with the healing process.  Graham finds a cottage on the outskirts of a small village and instantly falls in love with it and the large garden leading to an orchard.  It even has a quaint “apple shed” at the far end of the property.  Mary is not so sure and one very early morning before they moved she got out of bed, got in the car and drove to look at the cottage one more time.  Before she even got to the door she heard someone whisper her name.  Determined to start their new life she agreed to move anyway.  Soon after they befriend another childless couple and things begin to look like they may work out after all.  But – looks can be deceiving.

This story is told in multiple time lines, the present (Mary and Graham), the not too distant past (their tragedy) and 150 years into the past (the, also tragic, history of the original family in the cottage).  Multiple time lines is never a deal breaker for me when reading a book, in fact truth be told, I enjoy that particular writing tool.  In “The Stopped Heart” it became rather confusing.  The time line would switch suddenly from one paragraph to the next in the same chapter.  It was always a sudden jolt that I never quite got used to.

I really enjoyed the story being told in each time line.  All through the book there were hints and glimmers – even bright flashes at times – that the stories were interconnected, but when I finally got to the end of the book I felt that only one of those “bright flashes” had come to fruition.  The story kept twisting and spinning; the threads tantalizing my imagination, yet those threads did not ever connect.  I expected so much more to come together at the end, particularly one specific story thread.  Again, hints and teases, then it never happened and I was quite disappointed.

Yet, there was a definite “spine chilling” aspect to each time line that I loved.  Some ghosts, a mysterious stranger, an abduction, some murders and a deliciously creepy stalker character … those were the elements that kept me reading.  And, is it a ghost if it is a glimpse of a presence from the future?

I got to the end and rather than having an “AHA!” moment I was left with a “WTF” that came at me out of the blue and somehow didn’t even make sense?

Conflicted about this one?  I’d say!

I’m going to give it 3-stars and call it done.  After all that I still would not hesitate to recommend this book to fans of twisted stories with a supernatural element.  In fact I’d love to hear the opinion of others about this one.

Julie Myerson is the author of nine novels, including the internationally best selling “Something Might Happen”, and three works of nonfiction.  As a critic and columnist she has written for many publications including “The Guardian”, “The Financial Times”, “Harper’s Bazaar” and “The New York Times”.
Posted by Unknown at 5/04/2016