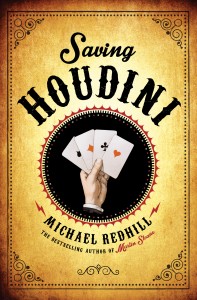 Bloom the Beguiler – that “great mystifier” – is performing at the Canon theater and Dashiel Woolfe is excited to be attending the show.  The show commemorates the 85th anniversary of Harry Houdini’s death.  Dash was surprised that his mom managed to snag tickets since the show usually sold out a year in advance.  However, when it came time for the finale, “The Great Soap Bubble Vanish”, Dash was really hoping he would not be the one picked to go up on stage … of course, he was chosen.  Dashiel had his own reasons for not wanting to be up on stage but had he known the history of the “Soap Bubble Vanish” he would have been even more apprehensive.  It was only performed once before and that night was never spoken of again.  Dash soon enough found out why when the last thing he remembered was standing inside a giant soap bubble and now he was alone on the stage … in 1926.  The first thing he did was throw up!

With the help of a new friend, a washed up magician and, maybe, Harry Houdini himself they may be able to recreate the trick and get him home.  Maybe?  To make that happen Dash and his friend Walter need to get from Toronto to Montreal, convince Houdini that his “time travel” story is true and build the machine for the soap bubble.  And, as only Dash knew, Houdini’s death loomed only a couple of days away.  Simple, right?  What if Dash could save Houdini too?  Quite the page turning adventure ensues.

Being a bit of a sucker for things “Houdini” I picked up this book in my recent “use up my gift card” book-shopping spree.  It’s written for young readers and I can certainly see them becoming quickly caught up in this well written and entertaining story.  I certainly was.  There is edge of your seat suspense, the conundrum of time travel, some breath stopping escapades, humor and of course, a little magic thrown in every now and then.

I think this book would definitely appeal to ‘tween readers of both genders but particularly boys.  The (mis)adventures that Dash and Walter get up to would certainly make a young man’s imagination run wild as well as tickle that pre-teen funny bone.  Mr. Redhill did an admirable job of describing the differences between 2011 Toronto and the same city in 1926.  “Saving Houdini” also contains a great message about friendship between it’s pages.

If you have a young (or young at heart) reader who likes adventure stories this would make a wonderful gift.

Michael Redhill is a fiction writer, playwright, and poet, and is the co-editor and former publisher of the literary magazine “Brick”.

His first novel, “Martin Sloane”, a finalist for the Giller Prize, won the Commonwealth Writer’s Prize and the Books in Canada First Novel Award.  His novel “Consolation” received the Toronto Book Award, was longlisted for the Man Booker Prize, and was the winner of the Keep Toronto Reading “One Book” campaign.

A father of two, Michael Redhill lives in Toronto.  Saving Houdini is his first book for young readers.