An Evening with Kathy Reichs

Kudos to KPL for always bringing in great authors. 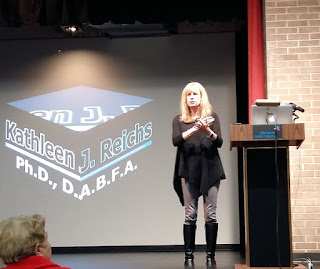 Last evening I was lucky enough to attend “An Evening with Kathy Reichs” at my local library.    I have to start off this post by saying I am not really a Kathy Reichs fan – okay, that’s a bit cold – let’s say I do not read Kathy Reichs.  I went to this event because my BFF is a fan (of both the books and the television series) and since she had never been to an author event (shocking – I know) she asked if I would accompany her to this one.  It didn’t take much arm-twisting since these library events are always free of charge and, I know from previous experience, always interesting and entertaining.  Ms. Reichs was no exception.

Ms. Reichs is a wonderful speaker. 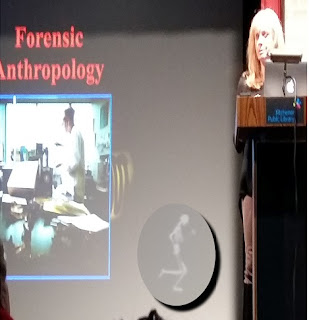 She began the evening by explaining to her audience a little bit about what a “forensic anthropologist” actually does for a living.  Given her many work obligations, her numerous humanitarian efforts, her charitable work, being a producer on “Bones” and enjoying her six grandchildren I am surprised she has any time left to write her popular books at all.  Now, I must say that the topic of forensic anthropology, especially accompanied by graphic slides, could be a little tummy-churning but Ms. Reichs handled it gently and with a sense of humor that, for some reason, I was not expecting.  I’m sure had a been one of her readers I would not have been as surprised because, as she explained, she does try to incorporate humor into both her books and television series to lighten things up once in a while.  I couldn’t help but notice that each of her slides during the presentation had a little skeleton somewhere on the screen doing somersaults, dancing, or just walking back and forth.  I tried to capture him in a picture but failed.  The image will give you the idea though. 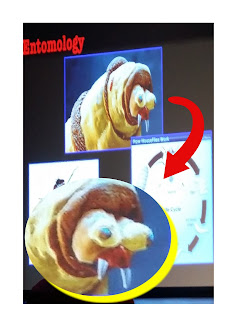 Ms. Reichs also admitted to frequently thinking “That's sooo cool!” when other folks not in her line of work might be thinking “Ewwww!”  She did try to convince the audience, while explaining the importance of entomology to her line of work, that maggots were cute.  She even brought a slide of a maggot magnified under a powerful microscope.  Yeah … I wasn’t buying into that one!

I am sure that I was the only person in the audience that was not familiar with every one of her books but she went through a few of them, starting with “Deja Dead” and explained which of her real-life cases the idea for the book came from.  Often it was a compilation of two cases or a “what-if” thought she had when puzzling out a forensic problem.  Even with authors whose works I do read I find the back-story of where the idea was born is always fascinating.  Ms. Reichs, taking the time to explain where the ideas for the books came from may have earned you a new fan … it definitely made me want to go out and pick up a copy. 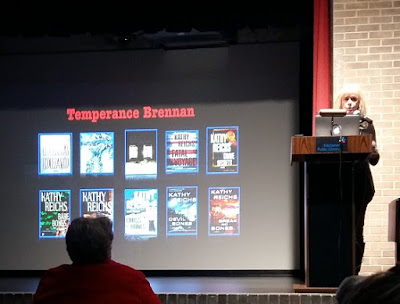 Ms. Reichs also introduced the “Virals” series, YA books she writes with her son, Brendan Reichs.  Wow, that series sounded really good to me.

Tory Brennan, niece of acclaimed forensic anthropologist Temperance Brennan (of the Bones novels and hit TV show), is the leader of a ragtag band of teenage “sci-philes” who live on a secluded island off the coast of South Carolina. When the group rescues a dog caged for medical testing on a nearby island, they are exposed to an experimental strain of canine parvovirus that changes their lives forever.

As the friends discover their heightened senses and animal-quick reflexes, they must combine their scientific curiosity with their newfound physical gifts to solve a cold-case murder that has suddenly become very hot-if they can stay alive long enough to catch the killer’s scent.

Fortunately, they are now more than friends- they’re a pack. They are Virals. 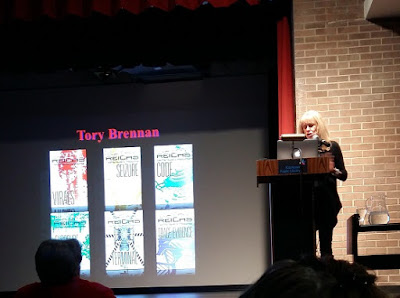 Ms. Reichs next segment was about “Bones” the television series.  She did touch slightly on the fact that the show doesn’t follow the books too closely.  I had been people watching and eavesdropping (as I am wont to do while standing in line) on the people waiting to go into the auditorium and one of the major things I noticed was the division between fans of the show and those of the books.  Only a slight few seemed to like both?  One group of fans enjoyed one or the other enough to make the 260-mile trek from Rochester, NY to attend the evening.  Ms. Reichs does write one show each season and I had no idea the amount of time, from idea conception to final production, went into getting just one episode on the air. 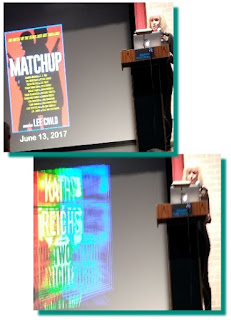 As her talk was wrapping up she did introduce two upcoming books.  One, a compilation brought to readers by the Mystery Writers of America in which she teamed up with Lee Child to write a story where the action features both Jack Reacher and Temperance Brennan.  Interesting!  Her next book (I didn’t catch the slide in time to show you the cover image) but it’s titled “Two Nights” and will NOT feature Temperance Brennan.  The only tidbit she would share was the main character’s name – Sunday Night.

The enjoyable evening ended with a Q&A from the audience where were learned that she enjoyed reading murder mysteries, those on the darker side, such as Jo Nesbo, Clive Cussler and, with a sly smile, she emphatically assured the audience that she had never heard of Patricia Cornwell.

A very well deserved round of applause ended the evening and we went out to meet Ms. Reichs in the lobby of the library to get our books signed.  Yes, I purchased her newest book “The Bone Collection” because Ms. Reichs won me over and this book is composed of four novellas.  Ms. Reichs explained that they were intended to be short stories but she has a little problem with the “short” part of that description.  I thought this would be a good introduction to her characters for a newbie like me.  My BFF was quite excited to note that “First Bones”, included in this book and never published anywhere before, is a story that reveals how Tempe became a forensic anthropologist, leaving behind the world of academia and moving “into the grim but addictive world of criminal investigation”. 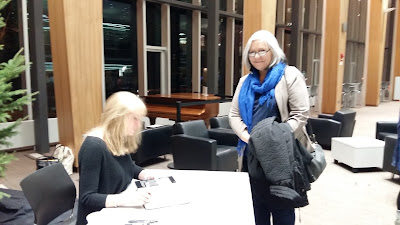 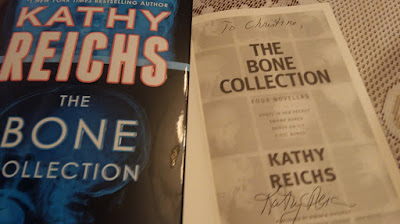