Who Let the Dog Out - A Review 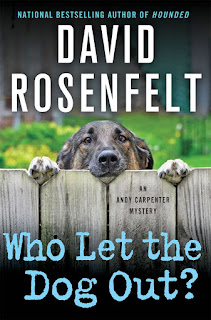 Andy Carpenter is a lawyer who takes cases on a “this sounds interesting” basis.  Because of a rather large inheritance he doesn’t have to work and this allows him the time to indulge in his passion … “The Tara Foundation” … a dog rescue shelter that he runs with his good friend (one time client - Andy successfully defended him on a murder charge), Willy.  When Willy calls Andy one evening to report the burglar alarm is ringing at the shelter it’s panic time.  Upon investigating they notice that the only thing missing is a dog they called Cheyenne (aka Zoe in her real life), a rescue who came in recently.  Tracking the dog they discover her sitting in a house – beside a dead body.  The police soon arrest Tommy Infante for the murder, but Andy just cannot leave it alone and once again he is drawn (seems he cannot help himself) into defending a murderer.

I am a big fan of Mr. Rosenfelt’s Andy Carpenter series so as difficult as it is to write the words I have to admit this was not one of his best.  Yes, the regular cast of somewhat misfit characters is all present and accounted for as are the requisite dog or three.  Yes, Andy's dry sarcastic wit is still spewing and in this case, possibly, saves the book.  There is just too much going on in this book to allow for me to become invested in the story.  Just as I was following along with the murder storyline Mr. Rosenfelt threw in a terrorist plot side story.  I got that in a previous book and wasn’t really interested in rehashing the "save the world" theme again.

This is the 13th book featuring Andy Carpenter and it may well be an unlucky number for this series.  I hope it was a blip in an otherwise fun and entertaining series.  Yes, I’ll still pick up the next one, but with the hope that both Andy and Mr. Rosenfelt are not getting a bit “tired”.