Thanks to Mr. Lazarus I can now proudly stand up
(Okay, sit down because I’m at the computer)

and proclaim loudly
(Okay, type in all caps)

I AM A DOGTOLOGIST
(Okay, non-practicing)


I must admit that I am also a little conflicted because my current living arrangements would more clearly indicate that I am a believer in “Catakism”.  Despite the fact that this dual belief system was “once a boiling pot, it has now been turned down to a simmer … this newfound détente has been the ability of some humans to embrace both beliefs”.  Catakism is nearly as widespread as Dogtology!  At least I’m not a DUD (human who Doesn’t Understand Dogtology) 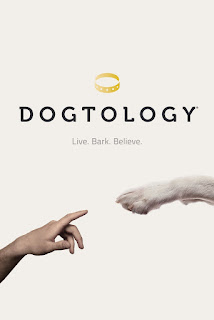 DOGTOLOGY:
(1) The belief in Dog,
(2) The system of rituals, practices, and behaviors engaged in by Dogtologists.

If none of what I have written so far has elicited a small smile or maybe even a snicker “Dogtology” may not be a book you want to sniff out.  This is a tongue-in-cheek “bible” explaining the “dogma” of those people who love their furry canine friends.  During the reading of this book I have come to understand why “Dog” is “God” spelled backwards, why men have nipples, why wolves howl, and the sole purpose of cell phone cameras. 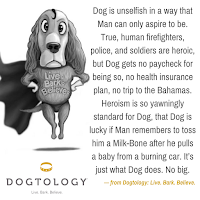 The book begins with a conversation between God and Dog.  God is explaining how he created Dog to be his “avatar” in the world.  Later He came to the conclusion that Dog needed a companion and someone to scratch behind Dog’s ears, so he created man … bit of an afterthought?  Obviously Dog and man were an important combination and the rest of the book goes on to describe how man has come to “worship” dog.

I found this book funny and charming and insightful, but some might take great offense to some of the references comparing dog ownership to a religious conviction.  I am not that sensitive and like to think that I have a sense of humor.  Come to think of it some dog owners might find it a little offensive too, only because it could hit too close to home.  Every point Mr. Lazarus makes is spot on. 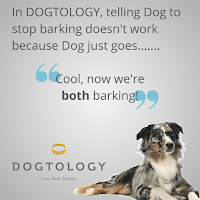 On the serious side, if there must be one, despite the humorous manner in which this book is written there were “aha” moments of understanding that this is also an excellent study of human beings as a whole; covering everything from favorite sports team support to religion.  It also may have convinced me that, sometimes, dogs may be smarter than man.

“Dogtology” was a fun book to read, so thanks to Mr. Lazarus (and his dog), for getting this dogma down on paper for me to enjoy.

ABOUT THE AUTHOR (from his Amazon Author Page) 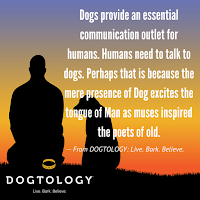 One night while out to dinner, the author's first-time date grabbed the third rail of dating and asked him, "What's your religion?" Without thinking, he blurted out jokingly, "Dogtology." As he later thought about his smart-ass response, he realized there was more truth to it than he'd intended--he didn't just love dogs, he adored them. All his life, he has been a dog advocate, dog rescuer, and dog whisperee. That's right; dogs talk to him. (In fact, Dog told him to write this book.)

The following video was Facebook and explains "Dogtology" quite nicely.