I love it when: (a) kids love to read and (b) kids do the right thing.

I saw the young man being interviewed on Toronto's Breakfast Television. Jackson Dowler accidentally tore a page in a comic book he borrowed from the library.  It happened when he fell asleep reading (bless his little reader heart), the book fell from his hands and the page tore.  He went to his parents the next morning and they attempted to repair the book, but he felt an obligation to pen a note to the library apologizing for the accidental damage.

This is the LINK to the video but I don't know if its viewable in all areas.

Librarians are planning to frame the note and display it somewhere in the library.  In my humble opinion this young man deserves his "five minutes of fame" for writing his apology note so I just wanted to share.  The following is the article from CTV NEWS WEBSITE.

An eight-year-old Toronto boy who penned a hand-written apology note to a local library branch after a comic book he borrowed accidentally ripped received a gift Wednesday for being "so conscientious."

Jackson Dowler received a number of books from library staff at the Main Street branch of the Toronto Public Library, where he had borrowed a copy of an Asterix comic.

"It's wonderful that you can come here today because we got your note in the drop-box about the book that had a torn page. And we were thrilled to get your note because it told us so many things about you," a librarian told Jackson before presenting the gift.

"First of all that you're so conscientious … and that you love reading when you go to bed," she said.

According to Jackson's note, he was reading before bedtime when he fell asleep. The book accidentally tumbled off his bed, ripping a page from it.
"I just fell asleep and I didn't know because I tend to forget stuff when I go to bed," Jackson told reporters at the east-end library. "I woke up finding pages somewhere else on my bed."

Jackson said he was worried he was going to get a fine, so he decided to write the apology note after telling his parents.

"I (went) to my mom and dad and told them: 'Mom, dad, my library book ripped in my bed when I fell asleep,'' he said. "And then I brought up the idea that I should write an apology note so the library would know." 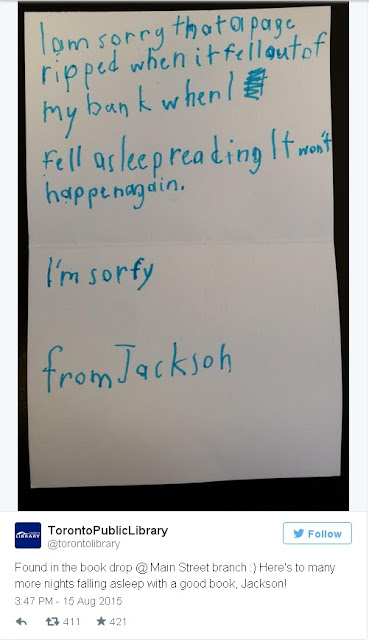 Jackson's note, which was paper-clipped to the borrowed book, was found by library staff. It was posted to the Toronto Public Library's Facebook page over the weekend with the caption: "Here's to many more nights falling asleep with a good book, Jackson!"

The post has been liked more than 4,100 times as of Wednesday evening.

In the sweet apology note written in blue, Jackson tells the library: "I am sorry that a page ripped when it fell out of my bunk when I fell asleep reading. It won't happen again."
Jackson says he's surprised by his newfound fame. The story has been picked up by a number of international media outlets.

"I find it kind of crazy because I've never gotten this much attention in my whole life," he said. "(I'm) really freaked out that I'm getting my 15 minutes of fame right now."

The Main Street library branch plans to frame Jackson's note and hang it up for other patrons to see.

Asked what other people should do if they accidentally damage a borrowed book, Jackson says they should let the library know.

"I think you should always write a note when you wreck a book because it's your fault."
Posted by Unknown at 8/20/2015