The Resurrection Maker - A Review

THE RESURRECTION MAKER by Glenn Cooper. 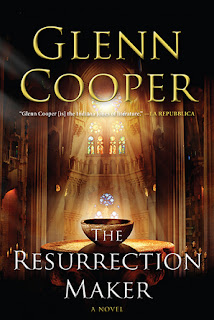 What do the Holy Grail, The Legend of King Arthur, Excalibur, Alchemy and String Theory have in common?  Apparently, Glenn Cooper, who has once again woven an impossible yet (mostly) believable tale.

Is “conspiracy theory/thriller/historical fiction/mystery” a genre?

Arthur Malory works at a scientific research center and spends his spare time combing the countryside with his metal detector.  He also belongs to a group calling themselves “The Loons” that meet regularly at their favorite pub to discuss the quest for the Holy Grail.  Arthur has a personal reason for being interested as he is a direct descendent of Thomas Malory who, while falsely imprisoned, penned “Le Morte D’Arthur”.  The Malory family has long thought the book contained the key to finding the Grail.

Arthur’s friend and fellow “Loon” calls him with an exciting Grail related discovery only to murdered before telling anyone about his find.  Coincidence?  Arthur thinks not!  As strange things continue to happen, and Arthur loses his job by getting on the bad side of the company’s owner he finds he has the time to really delve into his family legacy – the quest for the Grail.  Enter a mysterious young woman warning him of danger, a secret society determined to get the Grail and include an adventurous traipse through Britain, Europe and Egypt and you get the latest adventure from Glenn Cooper.

I have read all of Mr. Cooper’s books to date and his signature style is to tell the story by taking the reader through different time periods.  Mr. Cooper does this like a master and it never takes away from the reading enjoyment.  In fact, as I may have mentioned before, it adds to the reading pleasure because as the “hero” is puzzling out the clues the reader is getting the information first hand from the “people who where there” – per se – then rejoin the main story just as the “AHA” moment arrives.

Mr. Cooper’s books have often been compared to those of Dan Brown (The DaVinci Code) and La Republica describes him as “the Indiana Jones of literature”.  Although those two descriptions are quite accurate if comparisons need to be made, I think Mr. Cooper has carved a somewhat unique little niche for himself.  Mr. Cooper is definitely on two of my personal reading lists; “must buy” and “guilty pleasures”.  This book, as well as his others, are definitely books in which the reader can lose themselves for a couple of hours at a time and have a great adventure.

Although “The Resurrection Maker” is not part of a series, there was enough of a cliff hanger at the end to possibly allow for a follow-up book.  If you’ve never read any of Mr. Cooper’s books, although "The Resurrection Maker" is definitely worth the read and I enjoyed it thoroughly, I would always recommend “Library of the Dead”.  It was truly unique! 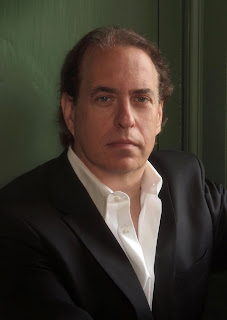 Glenn Cooper is the internationally best-selling author of the “Library of the Dead” trilogy, “The Tenth Chamber” and “The Devil Will Come”.  He graduated from Harvard with a degree in archeology and received a medical degree from Tufts University before practicing medicine as an infectious diseases specialist.  He was the CEO of a biotechnology company for almost twenty years, has written numerous screenplays and has produced three independent feature films.  His novels have sold more than six million copies in thirty one languages.