When the bell rings it signals “the changing”.  One child arrives at the island and the eldest leaves.  It’s always been the way …

“Nine on on island, orphans all,
any more ...
the sky might fall" 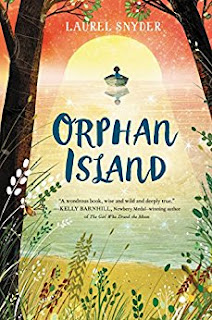 The children on the island do not know why they are there or why they must leave when their time comes.  That’s just the way things have always been.  The green boat arrives with a young child and the eldest must leave, always a boy for a boy and a girl for a girl.  Then the next eldest moves up to take care of the new arrival, teaching them the ways of the island and how to be as self sufficient as possible until it is their time to leave.

The island is an idyllic place to live; nothing there would ever hurt you – even the wind would not let you fall off a cliff, the snakes do not bite, the bees do not sting and the fishing net is always full.  Really, the only thing to remember is not to take the last of anything.  If you pick the last fruit then no more will grow.  It’s the way of things on the island, the rule to follow – like the changing.

But what would happen if one of the children decided not to leave?  Would the sky really fall?  Jinny didn’t think so and she knew that she was not ready to leave the island for the unknown fate the green boat represented, not even if it meant being reunited with Deen, who left the year before.

This was an enchanting and captivating story that had me turning the pages until I got to the end.  I don’t have too many one-day reads these days and this was such a lovely book to read on a quiet, overcast afternoon (and I have to confess to a bit of cover love as well).  Ms. Snyder captures the voices of various children on the island with perfection, ranging in age from (I’m guessing) three to just pre-pubescent, that in itself is admirable.  I had fun trying to figure out some of the terms the children has come up to name common objects.  Just what are “poms” and “sweet snaps” exactly?  I did manage to figure out “ersters” and “ink fish”!  She also gave me a totally believable community of children living in isolation on their own mysterious island.

This is a YA novel and possibly because of my jaded and decidedly not YA mindset I kept looking for a lesson in the pages of this book.  I am sure there is a wise lesson in there somewhere, I just couldn’t put my finger on it because I was so busy enjoying the story … I think I didn’t want to look too deeply.

When I came to the end the story felt somehow finished and not at the same time.  It wasn’t a cliffhanger but there was so much more I wanted to know.  What happened to Jinny in particular and on the island in general?  Who was Abby?  What’s the deal with the green boat?  I am hoping there will be a sequel – or better yet, a prequel, but if not – a little mystery in life is a good thing.

Loved this one so definitely 5 stars. 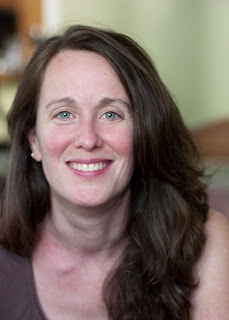 Laurel Snyder is the author of six novels for children, “Orphan Island,” “Bigger than a Bread Box,” “Penny Dreadful,” “Any Which Wall,” “Up and Down the Scratchy Mountains OR The Search for a Suitable Princess,” and “Seven Stories Up.” She has also written many picture books, including “Charlie and Mouse,” “The Forever Garden,” “Swan, the Life and Dance of Anna Pavlova,” “Inside the Slidy Diner,” Good night, laila tov,” “Nosh, Schlep, Schluff,” “The Longest Night,” “Camp Wonderful Wild,” and “Baxter, the Pig Who Wanted to Be Kosher.”

In addition to her books for children, Laurel has written two books of poems, “Daphne & Jim: a choose-your-own-adventure biography in verse” (Burnside Review Press, 2005) and “The Myth of the Simple Machines” (No Tell Books, 2007). She also edited an anthology of nonfiction, “Half/Life: Jew-ish tales from Interfaith Homes” (Soft Skull Press, 2006) A graduate of the Iowa Writers’ Workshop and a former Michener-Engle Fellow, Laurel has published work in the Utne Reader, the Chicago Sun-Times, the Revealer, Salon, The Iowa Review, American Letters and Commentary, and elsewhere.

She is an occasional commentator for NPR’s All Things Considered, and she teaches in the MFAC program at Hamline University, but most of all, she is a mom.
Posted by Unknown at 6/07/2017