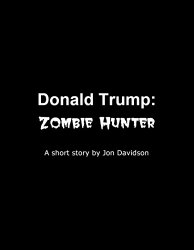 “… the world has improved since the day he was sworn into office.”

“… managed to wipe out national debt and create a budget surplus by the end of his first term as commander-in-chief.”

“ … even Putin himself spoke highly if his inherent awesomeness on a number of occasions.”

He moved with “ninja stealth”.

He “utilized his ultra-keen hearing powers”.

When you come to realize that in this story all of the above sentences apply to “The Donald” during his first term in office as President you have to think I was reading urban fantasy.

Actually this is a very amusing parody.  Mr. Davidson has taken an alternate reality and made “The Donald” the very successful president of the United States.  Then he brings truth to the saying “be careful what you wish for” because as “The Donald” is lying in bed one night with “The Hot Wife” he feels “empty inside” wishing for something else exciting to happen; some new adversity he could overcome … when suddenly zombies attack.  When his personal bodyguard, Jesse Ventura succumbs to the zombies “The Donald” knows he himself is the only hope.  Funnily enough all the zombies resemble Donald Trump’s political opponents and nay-sayers.

Written by Jon Davidson, DONALD TRUMP: ZOMBIE HUNTER is a very short story – 8 pages in PDF format – and it is very well written.  If you have even an inkling of a sense of humor you will find this story funny.  It reads like a “Saturday Night Live” script.  I did notice the author had an alarmingly astounding aptitude for alliteration, which under ordinary circumstance might become annoying, but in this case just added to my amusement.

* I received this short story at no charge from the author via “WordSlinger” in exchange for an honest (and optional) review. *
.
The Amazon.com link is HERE