* I received this ebook at no charge from Netgalley in exchange for an honest review. *

At the end of the 19th Century things were starting to change and Florence “Flossie” Jayne wanted to be a part of that change.  She wanted to be a “New Woman”.  When the all male work force at Tiffany Glass went on strike Louis Comfort Tiffany was on a deadline to finish his Glass Chapel for the upcoming World’s Fair in Chicago.


He decided to buck tradition and hire women to do the work.  Women could not join a union so would, technically, not be considered “scabs” if they crossed the picket line.  When he hired Flossie to be one of his Tiffany Girls she jumped at the chance excited with both the job and the independence it would allow her to have.  Against the wishes of her parents she packed up and moved into a boarding house.

Flossie learned the hard way that often things are not as simple as they seem to be in the planning stages.  Coming from the very sheltered existence she was used to, where she could do no wrong and everyone loved her, it was quite an eye opening experience when she had to live with the varied people at the boarding house – particularly the crusty Mr. Reeve Wilder.

I requested this book because I read and very much enjoyed another book about the same era (“Clara and Mr. Tiffany” by Susan Vreeland).  For that same reason that I chose the book I left it to languish on my ereader for far too long before I started reading it. (Sorry Netgalley!).  Books with a high page count do not intimidate me and at over 500 pages this one is moderately hefty, however I quickly became engaged in the story and the pages turned very quickly.  Always a sign of a good read!

I have not enjoyed one of Ms. Gist’s books previously and I found this one to be very easy to read, entertaining and full of historical facts about women in the 1890’s, Tiffany’s and life in a boarding house with a sweet romance thrown in for good measure.  Ms. Gist certainly did her research and she weaves those historical details into her story without making the reader feel as if they are reading a history text.

When I saw the title and read the description of “Tiffany Girl” I knew I would not be able to help myself in making comparisons to “Clara and Mr. Tiffany”.  Yes, the ensemble cast at Tiffany’s is the same (good thing when talking about accuracy in historical fiction) and the story telling is equally well done but where Ms. Vreeland concentrates on the Tiffany Company and delves more deeply into the glass-making and cutting Ms. Gist, while still giving her reader interesting tidbits of information, uses the work at Tiffany’s as background to what is happening elsewhere in Flossie’s life.  I learned a lot about what life must have been life for a “New Woman” in the 1890’s because of Flossie, and learned it while enjoying a beautifully written story complete with pictures, sketches and illustrations depicting the era at the beginning of most chapters. 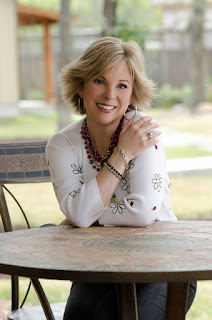 Deeanne Gist has rocketed up the bestseller lists and captured readers everywhere with her very original, very fun historicals.  Add to this four RITA nominations, two consecutive Christy Awards, rave reviews, and a growing loyal fan base, and you’ve got one recipe for success.

With three-quarters of a million trade books sold, her awards include National Readers’ Choice, Book Buyers’ Best, Golden Quill, Books*A*Million Pick of the Month, Romantic Times Pick of the Month, Award of Excellence, and Laurel Wreath.
She has a very active online community on her blog, on Facebook, Pinterest, and on her YouTube channel.

Gist lives in Texas with her husband of thirty-two years and their border collie. They have four grown children.
Posted by Unknown at 7/24/2015