Lessons From Tara - A Review

Before I even start this blog let me freely admit that I "borrowed" all the pictures from Mr. Rosenfelt's Website and Facebook page.  Uhm?  They are public domain, right? 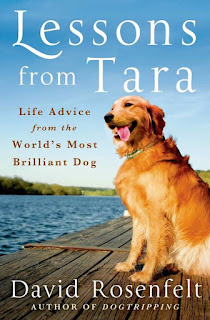 LESSONS FROM TARA by David Rosenfelt.

I was first introduced to Tara as Andy Carpenter’s faithful Golden Retriever in Mr. Rosenfelt’s “Andy Carpenter” series.  Although she does nothing even remotely un-dog-like in those books she is Andy’s sidekick, matchmaker, confidant and friend.  She has Andy well trained, can bend Andy to her will with just a canine look and, will never eat a dog biscuit in his presence.  Little did I know when I started reading that series (the first one of his books I picked up had a Golden on the cover – naturally) that Tara was based on a real-life Golden also named Tara and also in possession of all the traits I loved in the books – and more.

Mr. Rosenfelt credits Tara for bringing him together with his wife, for teaching him to be a better person, for being his companion and for breaking his heart.  You know – all those things dogs do when we love them.  When Tara died, after a short but valiant fight with cancer, the Rosenfelt’s made a couple of posthumous promises to their beloved dog … one, they would never eat hotdogs (her favorite) again and, after they established The Tara Foundation that two, they would never turn away a Golden in need. 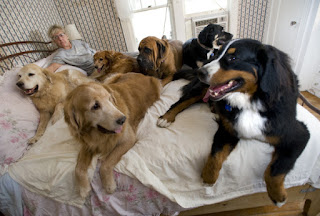 The promise about the hotdogs was the more difficult of the two to keep. 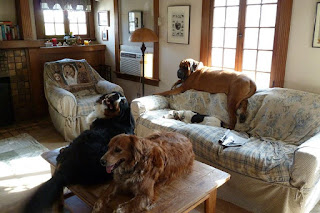 David Rosenfelt and his wife, Debbie, have devoted the past few decades to rescuing shelter dogs that might otherwise be impossible to place; mostly elderly dogs and dogs with severe health issues.  Since even the Rosenfelts cannot always work magic in placing dogs and because they remember their promise to their beloved Tara often those dogs find their forever home with the Rosenfelts.  The actual count of dogs living in their home at any given time can range from 20 to 40 … so, after shoveling the poop out of the backyard with a snow shovel, schlepping in 250-pound bags of kibble and cleaning the dog hair out of the printer Mr. Rosenfelt found time to sit down and write about what he learned from all the dogs that lived and were loved in their home.

Having enjoyed the tale of their cross-country journey, from California to Maine, with 25 dogs, 3 RV’s and a group of volunteers in “Dogtripping” I was looking forward to reading this book.  It was a quick read (two evenings and a few cups of coffee) because the book is written in a very casual style … simply reminiscences of all the dogs he’s loved before and what each of them (including Tara) taught him.  This book made me laugh, made me cry, sometimes made me angry and, often, made me shake my head in wonder.  Mr. Rosenfelt writes this book with the wit and humor I have come to expect, his (usually self deprecating) sarcasm, with honesty (ahem … we’ll talk about the wolf another time) and with lots and lots of love. 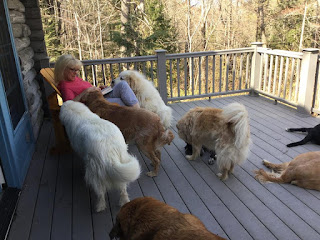 This is a definite must read for dog lovers as well as for Mr. Rosenfelt’s fans, but maybe more importantly it should be read by anyone looking to adopt a dog – it may make you think twice about wanting a puppy instead of adopting an adult dog.

Without any further explanation or apologies I am giving this book 5 stars because it made me feel good and I loved it!  And, because I think Mr. Rosenfelt deserves it for uncomplainingly (mostly) putting up with all that dog hair. 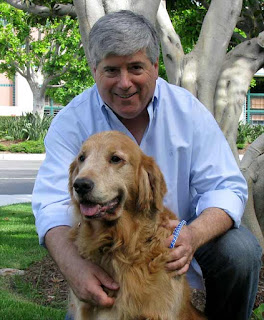 I graduated NYU, then decided to go into the movie business. I was stunningly brilliant at a job interview with my uncle, who was President of United Artists, and was immediately hired. It set me off on a climb up the executive ladder, culminating in my becoming President of Marketing for Tri-Star Pictures. The movie landscape is filled with the movies I buried; for every “Rambo”, “The Natural” and “Rocky”, there are countless disasters.

I did manage to find the time to marry and have two children, both of whom are doing very well, and fortunately neither have inherited my eccentricities.

About fourteen years ago, my wife and I started the Tara Foundation, named in honor of the greatest Golden Retriever the world has ever known. We rescued almost 4,000 dogs, many of them Goldens, and found them loving homes. Our own home quickly became a sanctuary for those dogs that we rescued that were too old or sickly to be wanted by others. They surround me as I write this. It’s total lunacy, but it works, and they are a happy, safe group.
Posted by Unknown at 7/11/2015