From an interview for Rolling Stone Magazine:

When asked why he started out in the horror genre when it was widely considered “less than respectable” …
“And I have to say this: To a degree, I have elevated the horror genre.”

A few times Mr. King has contemplated retirement, but he always keeps writing …
“It fulfills me. There are two things about it I like: It makes me happy, and it makes other people happy.” 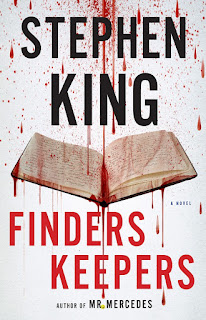 Morris Bellamy could probably have made his living writing critiques about his favorite book series featuring Jimmy Gold, his literary hero.  But life has damaged Morris quite a bit so he has difficulty channeling his energy in a socially acceptable manner. Instead, he is angry with the author John Rothstein, because of the way the books series ended (whew … slight personal flashback to the Dark Tower Series) and he decides to pay the reclusive author a visit.  The visit does not end well for Mr. Rothstein or Morris’ accomplices.  Morris himself couldn’t be happier; not only did he make off with tens of thousands of dollar in cash, but more importantly to Morris, a treasure trove of moleskin notebooks containing the rest of Jimmy Gold’s unpublished story.  What does Morris do with his ill-gotten gain?  He knows he cannot keep it with him so of course he buries it.  Unfortunately for Morris his life spins slightly out of control and he cannot get back to recover his prize.  That was in the 1970’s.

Now it’s present day and Pete Sauber is walking through the woods when he stumbles upon a buried travel trunk.  This discovery is like “manna from heaven” because things have not been going so well since the recession hit and his father was injured in the Mr. Mercedes massacre.  Peter doesn’t think twice about helping his family with the money but he squirrels away the notebooks for his own enjoyment and he is also becomes a Jimmy Gold fan.

Morris inconveniently reappears at about the same time the money runs out and Pete needs to make some decisions about what to do.  They turn out to be not the best decisions he could have made so young Pete’s life takes an (un)expected turn for the worse.  Through a fortuitous set of circumstances Bill Hodges, the retired cop/now unlicensed PI, and his cohorts from the Mr. Mercedes case become involved, but can they piece things together quickly enough to save Pete?

“Finders, Keepers” is the second in the Bill Hodges trilogy, and as was Mr. Mercedes, this book is a step away from the “horror” genre for which Mr. King is known.  This book is definitely an action/thriller.

Mr. King is my go-to author for horror but this book does not disappoint – it may just not be what you are expecting.  “Finders, Keepers” gave me an antagonist I could really despise – everything from his appearance to his demeanor was reprehensible and a protagonist I felt for every step of the way.  Most of the suspense in this book comes from Pete’s angst about what his is doing and the decisions he is making.  It was written well and it was believable.  Every time something worked out for him I felt like cheering.  The driving factors moving this story forward were the coincidences that kept cropping up, but rather than detracting from the story they made me sigh and think “poor Pete, what else could possibly go wrong”.

I know this is Bill Hodges’ series so it was unusual that he did not make appearance until well into the book, but that worked too.  The story had me captivated and I didn’t really miss him until he came along and gave me that “oh, yeah” moment.

Was this King at the top of his game?  Maybe not quite, but it was a good read.  I’ll definitely be picking up the next book because there was just enough of a kiss and tease in this book to make me think there will be some kind of horror element in the final book of the trilogy. 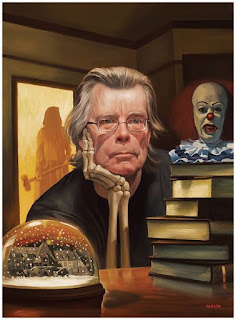 Stephen Edwin King was born in Portland, Maine in 1947, the second son of Donald and Nellie Ruth Pillsbury King.  Stephen attended the grammar school in Durham and then Lisbon Falls High School, graduating in 1966. From his sophomore year at the University of Maine at Orono, he wrote a weekly column for the school newspaper, THE MAINE CAMPUS.

He and Tabitha Spruce married in January of 1971. He met Tabitha in the stacks of the Fogler Library at the University of Maine at Orono, where they both worked as students.  Stephen and Tabitha now spend winters in Florida and the remainder of the year at their Bangor and Center Lovell homes.

The Kings have three children: Naomi Rachel, Joe Hill and Owen Phillip (both authors themselves), and four grandchildren.
Posted by Unknown at 6/27/2015