A Little Visit to Boston 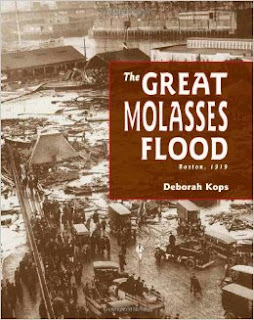 January 15th, 1919 was an unseasonably warm day in Boston’s North End.  Everyone was going about his or her day-to-day lives when the unthinkable happened.  Amidst screeching steel and popping rivets a large tower “exploded” and a flood of molasses covered the area.  In total 21 people lost their lives and many more were injured as the metal pieces soared through the air and whole buildings were moved off their foundations.  One person was sent flying through the air and into the frigid waters surrounding Boston.  A 6-year long court case ensued between the citizens of Boston and U.S. Industrial Alcohol Company for restitution and the settlement of damages for the victims.  Blame flew back and forth, fingers pointing at the USIA for negligence, the local Anarchist Society (suspected of placing a bomb in the tank) and even so far as accusing a 6-year-old girl killed while she was playing in the area of being the one to plant to the bomb for them.  Settlement was finally reached out of court.

Ms. Kops does a respectable job of telling of the tragedy in an abridged yet very understandable manner.  This by necessity as the book is written as a “children’s book suitable for ages 9 through 12”.  I picked this book up because I had never heard of the “Molasses Disaster” until I took a walking tour of Boston several years ago.  I always meant to look into it a little further but until this little book caught my attention I never got around to it.  So why read a children’s book?

2 – While reading it, I found it contained all the information I needed to know without making a huge time investment.

3 – It had some truly incredible pictures.  (Yes – I like picture books sometimes – stop guffawing)

This book satisfied all my needs when it came to what I wanted to learn about the “Molasses Disaster”. 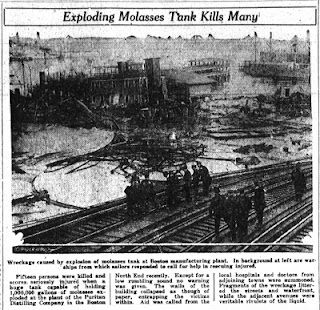 With a title like “The Great Molasses Flood” it sounds like it may be an amusing bit of bedtime reading for a little tyke.  It’s hardly that.  Ms. Kops is very factual about what happened including descriptions of people being trapped under debris, injuries people suffered and the deaths that were caused.  She also goes into fairly extensive detail about the court case.  The top end of the recommended 9 – 12 years old would probably be more suitable as the writing is very fact based, with few embellishments, so unless the youngster had a real desire to know about the incident, they may not find it overly captivating for a casual read.  Information packed … absolutely!  I would even go so far as to say it would be an excellent resource for a 4th grade history paper. 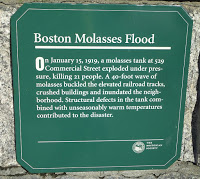 I do think this book should have a place on the shelf in every school library’s history section, especially because of the pictures and newspaper article reproductions included.

A small plaque was placed at entrance to Puopolo Park by the Boston Historical Society to mark site of the disaster. 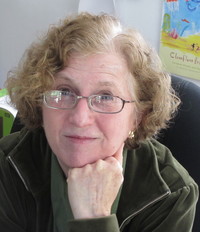 "I grew up in a suburb of New York City, where I lived with my parents and older sister.  When I was in fourth grade, my wonderful teacher, Mrs. Silvers, always made time for creative writing. I wrote long, dramatic stories, which often had tragic endings. Mrs. Silvers egged me on.

Like many writers, I’m curious about a lot of things. One of my first writing jobs was reporting for a small newspaper in Vermont—perfect for a curious person. I wrote about everything from animal auctions to dog sledding, which I got to try. That was exciting! (And I covered a lot of meetings, which were not so exciting.)

Years later I edited books for children at a small publishing house in Connecticut. I enjoyed helping authors polish words and tweak paragraphs until they sang. And, being curious, I may have annoyed one or two of them with all my questions. Then it was time to write my own books." 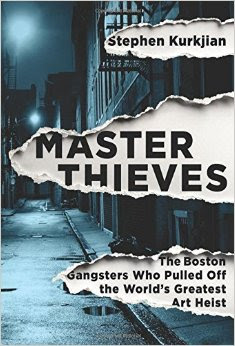 MASTER THIEVES (The Boston Gangsters Who Pulled Off the World’s Greatest Art Heist) by Stephen Kurkjian.

In March of 1990 two men dressed as police officers knocked on the door of the Isabella Stewart Gardner Museum in Boston.  An inexperienced security guard allowed them through the door.  The two guards on duty were tied up in the basement and the thieves had free reign in the museum.  Forty-five minutes later they existed the museum with thirteen works of art valued at $500 million dollars.  This is the largest unsolved art theft in history.  Mr. Kurkjian’s book is the latest of many books (both fiction and non-fiction) written on the subject over the last 25 years.

In “Master Thieves” the reader is updated on the investigation and introduced to the gangs and organized crime groups in Boston long rumored to have been involved in the theft.  Mr. Kurkjian uses many of the contacts made during his years as a reporter at the Boston Globe to obtain interviews, gather ideas and offer speculation about who might actually have “pulled the heist”.  Mr. Kurkjian does not pull any punches when it comes to his criticism of the FBI investigation.  He feels that they dropped the ball in more ways than one; turning down help from local law enforcement agencies who may have had better contacts and informants as well as not following up on substantial and very credible leads which they determined “not useful”.  Is he correct in his criticism?  He makes a strong case.

As Mr. Kurkjian points out in his afterward, he did not spend a lot of pages discussing the theft itself because most readers will be familiar with the details.  Although he always does draw the reader’s attention back to the Gardner robbery, this is definitely a time line of underworld activity in Boston and surrounding areas from the mid 20th century to the present.  Interestingly, Mr. Kurkjian, at the end of the book, offers the reader not only a viable motive behind the crime but also does a little finger pointing in the direction of whom he thinks are the most likely suspects.

I have read about and been fascinated by not only the theft but by Isabella Gardner’s life and how the museum came into being so this book was right up my alley of interest.  “Master Thieves” is probably not the best book to pick up without at least a little background about both the museum and the robbery.

This year marked the 25th anniversary of the theft and no one has been arrested nor has anyone had a verifiable sighting of the valuable pieces of art in all that time.  It was on my bucket list to see the Gardner Museum and a few years ago I was able to do just that.  I found the museum itself rather overwhelming and it truly is a breath stopping moment to walk into the Dutch Room and see the empty frames hanging on the wall.  After all the reading, and especially after finishing this book, my personal opinion is that if the paintings have not been destroyed over the past 25 years, they will surface accidentally when all of the key players in the mystery have died and a relative comes across them hidden away in an attic somewhere.

If your interest is piqued a little about the Isabella Stewart Gardner robbery this an excellent website to check out http://www.gardnermuseum.org/resources/theft/. 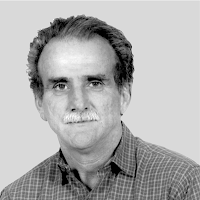 Stephen Kurkjian was born and raised in Boston, and a product of the Boston public schools, including The Boston Latin School. He graduated from Boston University with a degree in English Literature and Suffolk University Law School.

Stephen Kurkjian is one of the most acclaimed investigative reporters in the country. A forty-year veteran of the Boston Globe, he is the paper’s former Washington bureau chief and a founding member of its investigative Spotlight Team. Kurkjian has won more than twenty-five national and regional awards, including the Pulitzer Prize on three occasions. He is a graduate of Suffolk Law School and lives in Boston.
During his career, Kurkjian specialized in writing about political and government corruption, as well as, in his later years, art theft..

Kurkjian lives in Boston, and is the father of two children - Erica Kurkjian Parrell, a public school teacher, and Adam, a sports reporter for The Boston Herald - as well as grandfather to three, Theodore, Jillian and Emily Parrell.