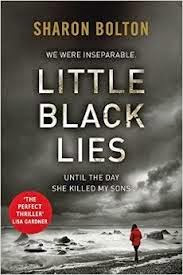 Catrin and Rachel had been best friends since girlhood.  In one split second of inattentiveness that all changed.  While Catrin’s children were in Rachel’s care, Rachel left them in the car to tend to an errand, somehow the handbrake was disengaged and the car rolled over a cliff and onto the rocks far below.  The boys were dead before the car hit the rocks.

Obviously, the friendship ended, but who was suffering more?  Catrin, who lost her children or Rachel, the woman who was responsible?

To Catrin it seems that everyone has carried on with his or her lives while she cannot let go of her grief.  Her, now ex, husband has gone on to remarry and have a new son.  Rachel still has her two sons and the son she was pregnant with at the time.  Catrin has nothing but her work and her grief.

In the years since the accident two boys have gone missing and have never been found – boys that bear a remarkable resemblance to Catrin’s sons.  When a third child disappears the island is in an uproar.  Catrin’s ex-lover finds that child; a little worse for wear, but alive and just when everyone is breathing a sigh of relief another boy disappears and this time its Rachel’s youngest son.  It happens on the anniversary of the tragic accident that killed Catrin’s boys.  All eyes are beginning to turn toward Catrin.  Could she hate Rachel that much?

And that is as far as I am going to go with my description of the book.  To take it any further would be to give away too much.  This is an intense mystery/thriller where something happens on every page.  The characters are well developed and I became more and more invested in them as I read.  Even the minor characters have personality and give the action some much-needed lightness every once in a while.  In this passage Callum, the very tall, very large ex-soldier and war hero is taken to task over his foul language:

“Mable is back, standing directly in front of me, holding a bottle of washing up liquid.  I look down.  At it; at her.
“Mind your mouth, young man, or I’ll wash it out,” she tells me.  “This might be a newsroom but we’re not on Fleet Street and we’re not the ones writing this crap.”
Mable is half my height, probably a quarter of my weight and yet I have a feeling that, were I to smile right now, I’d regret it.  “But I’m allowed to say crap?  Right?”
She waves the Fairy Liquid in my face.  “No, I’m allowed to say crap because I’m ninety-two and I don’t give a shit.  You can say yes ma’am, no ma’am, sorry to give offence ma’am, but if I were you I‘d be out of here and trying to find Catrin.”

This book is written using three separate points of view.  Catrin starts, giving the readers bits and pieces of information as she tells her story.  Just as she is about to share a dark secret Callum’s voice takes over, and the book ends with Rachel’s narrative.  When Callum took over the telling I was taken aback.  I had that moment of “REALLY???  NOW???”  I soon got over it.  Yes, there was a little overlap, but soon enough we were back on track and I realized that changing the narrator made perfect sense.  After all, they each had a little piece of the puzzle that they were sharing.  I forgive Ms. Bolton for pulling that out of the hat when I was least expecting it.

Ms. Bolton does a superb job at describing the ruggedness of the landscape, the isolation of the village and the harshness of the climate.  She set a backdrop that could almost be described as gothic.  One example of setting a perfect mood came when Catrin, who works on and in the water for her job, was describing a shipwreck she and Callum are preparing to investigate in their search for the missing boy:

“The wreck looks enormous from the water.  It rises up before us, black and dead.  Maybe sixty or seventy years ago it was left behind by those it served well.  Not for the first time, I wonder if ships feel pain when their days on the sea come to an end.
It’s swaying in the rough sea.  As we get closer, it rocks and pitches in a sad echo of how it used to move on water.
I dive wrecks from time to time, but I never really enjoy doing so.  They attract a particular sort of ocean life into their secret places.  Boats belong on top of the waves, not beneath them.  Wrecks speak of lost hopes, of wasted lives, of dreams that didn’t survive the storm.”

This story unfolds in the same manner a storm might build over the sea surrounding the Island.  The waves start rolling slowly, crest, and then a bigger wave comes to take its place … each one a little higher and a little more dangerous than the last.  I can’t say too much about the ending because it would require a significant “spoiler alert” but suffice it to say I was perched on the edge of my chair reading the last third of this book.  I couldn’t put it down because I had to know the final outcome.  When I finally felt as if I could almost relax a little because now I knew the truth – nope – that final unexpected and devastating wave crashed into the shore … I got a shiver reading the last few paragraphs.  Ms. Bolton certainly gave me the definition of a thriller with this book.

When I finished the book I felt there was one unanswered question left hanging.  It wasn’t until I was thinking about what to write for this review that it dawned on me that it had indeed been answered in the last three sentences.  When you read this book, and you should, watch for all the clues that should be clear as day, you just don’t know it until the end. 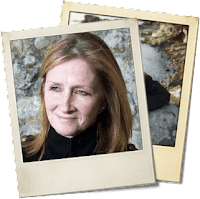 Sharon (formerly SJ) Bolton grew up in a cotton-mill town in Lancashire and had an eclectic early career which she is now rather embarrassed about.  She gave it all up to become a mother and a writer.

Her first novel, Sacrifice, was voted Best New Read by Amazon, UK, whilst her second, Awakening, won the 2010 Mary Higgins Clark Award.  In 2014, Lost was named RT Magazine’s Best Contemporary Thriller in the US, and in France, Now You See Me, won the Plume de Bronze.  That same year, Sharon was awarded the CWA Dagger in the Library, for her entire body of work.
Sharon lives near Oxford with her husband and son.  For more information about her books, or to check out her addictive blog, visit www.sharonbolton.com
Posted by Unknown at 5/15/2015