Why Did You Lie - A Review

Yrsa Sigurdardottir has been a fave of mine since I read the first book in her Thora Gudmundsdottir series.  This standalone novel showcases what Ms. Sigurdardottir does best … chills up your spine and not just because of the cold Nordic setting 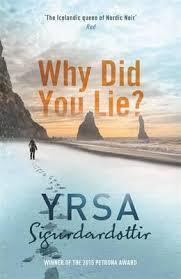 WHY DID YOU LIE by Yrsa Sigurdardottir

Nina’s life has slipped off the track a little bit.  She is a pariah among her fellow police officers for filing a sexual harassment suit.  Now she is working on dead files in the basement of the building where she has entirely too much time to think about her husband who is lying in a coma after attempting suicide.

Helgi is a photo-journalist doing a photo shoot on a very small, very remote island where a team was sent to refurbish a defunct lighthouse.  Helicopter troubles keep them on the island longer than usual and during a raging winter storm one of them disappears.

Noi and Vala return from a trip to the United States where they had house-swapped their home with an American couple.  Coming into their house they sense that something is off but cannot put their finger on what it is.

What do these people have in common?  At one intersecting point in their lives they lied!  Now, someone or something wants them to pay for those lies.

I enjoy Ms. Sigurdadottir because she give me the all the thrills and chills I love without the “in-your-face” horror.  In “Why Did You Lie” she tells four seemingly unconnected stories that each hold your interest independently but when she brings them together at the end of the book it is in the most deliciously unexpected way.  If you enjoy mystery thrillers with a touch of what might or might not be a supernatural element I highly recommend you add Ms. Sigurdardottir to your TBR. 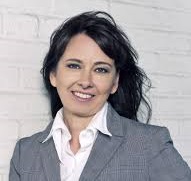 Yrsa Sigurdardottir works as a civil engineer and lives in Reykjavik.  She is the author of six novels in the Thora Gudmundsdottir series and two previous stand alones, “I Remember You” and “The Undesired”.  All of her books have been European bestsellers.

In 2011 "I Remember You" was awarded the Icelandic Crime Fiction Award and was nominated for the Glass Key.  The most recent Thora novel, “The Silence of the Sea”, won the Petrona Award in 2015.